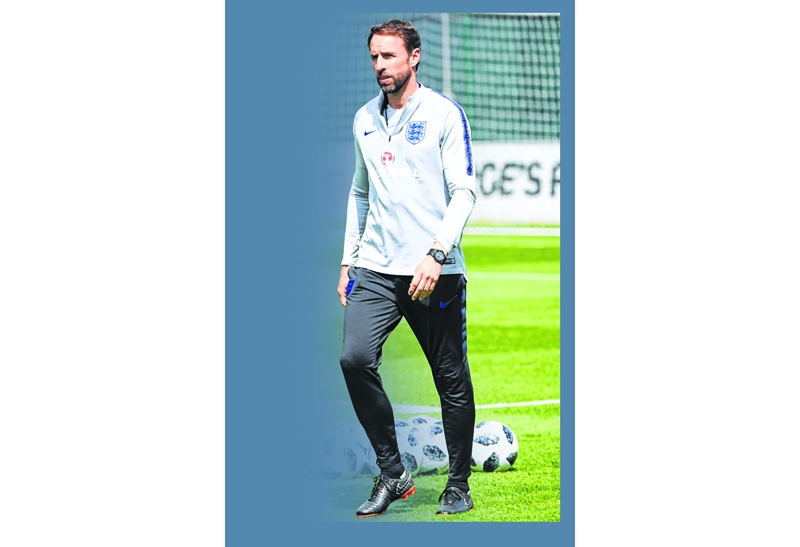 England's manager Gareth Southgate attends a open training session at St George's Park in Burton-on-Trent on June 6, 2018, ahead of their international friendly football match against Costa Rica. / AFP PHOTO / Paul ELLIS / NOT FOR MARKETING OR ADVERTISING USE / RESTRICTED TO EDITORIAL USE |

“I believe this is a squad which we can be excited about. It is a young group, but with some really important senior players so I feel the balance of the squad is good, both in terms of its experience, its character and also the positional balance.”

London : Four years ago, there was a collective groan from the whole country as England were spectacularly knocked out of the FIFA World Cup in Brazil at the first hurdle.

It was the first time England had been knocked out in the group stages since 1958, and the first time they have been eliminated after just two matches.

Four years on, Roy Hodgson’s successor Gareth Southgate hopes that among his 23-man squad there will be a winning 11 able to restore honour and glory. Since taking charge of the team, Southgate has lost only two of the 16 World Cup preliminaries, notching up eight wins and six draws.

Southgate, who himself competed at the 2002 FIFA World Cup in Japan and South Korea, has named what he believes is a balanced squad with a mix of experience, character and youth.

Uncapped Liverpool youngster Trent Alexander-Arnold, at 19, is the youngest member of the squad, while also gaining his first cap is Burnley’s 26-year old goalkeeper Nick Pope.

Three 30 something players bring that helping of experience, with Chelsea defender Gary Cahill, at 32, topping the most-capped list with 58 selections for England.

Manchester United’s Ashley Young, also 32, has earned 33 caps, and between them they have netted the ball 11 times for England.

Forward James Vardy, at 31, is the next oldest player with 21 caps to his credit, as well as seven goals. Southgate has also included a sprinkling of younger players with just a small handful of caps, like Chelsea’s 22-year-old twice-capped midfielder Ruben Loftus-Cheek. Everton goalkeeper, Jordan Pickford, 24, will also be collecting his third cap.

“I believe this is a squad which we can be excited about. It is a young group, but with some really important senior players so I feel the balance of the squad is good, both in terms of its experience, its character and also the positional balance,” Southgate said.  Southgate described his team as one with a lot of energy and athleticism, but with players that are equally comfortable in possession.

“I think people can see the style of play we’ve been looking to develop.

The selection process has been over months really, it’s not just been the last few weeks,” he added.  Southgate has gone for youth and hope over tried, tested and failed in his 23-man squad for the World Cup.  Joe Hart and Jack Wilshere are out but Alexander-Arnold, Ruben Loftus-Cheek, 22, and Marcus Rashford, 20, are in.

England will open their World Cup campaign against Tunisia in Volgograd on June 18. They will also meet Group G rivals Panama and Belgium, in the hope that the misfortunes of 2014 will not be repeated.