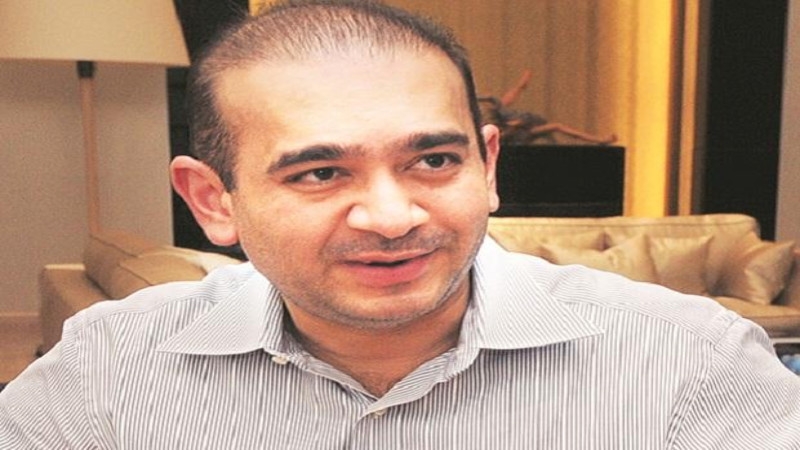 Modi and two of his associates were seeking dismissal of fraud allegations against them by the trustee of three companies they previously owned indirectly. |

A bankruptcy court in the US has rejected a petition of Nirav Modi, the fugitive diamond merchant and two of his associates.

Modi and two of his associates were seeking dismissal of fraud allegations against them by the trustee of three companies they previously owned indirectly.

What are the allegations?

The allegations were made in a New York court by Richard Levin, the court appointed trustee of three US corporations--Firestar Diamond, Fantasy Inc and A Jaffe--indirectly owned by 50-year-old Modi previously.

Levin had also sought a minimum compensation of $15 million for “harm” suffered by the debtors of Nirav Modi and his associates Mihir Bhansali and Ajay Gandhi.

Nirav Modi, who is currently lodged in a jail in the UK, is challenging India's attempts to extradite him to face charges of fraud and money laundering in the Punjab National Bank (PNB) scam case.

Explaining the 60-page order, Batra said Modi ploughed his profits back into his own company as additional sales to falsely raise the stock price/company valuation by setting up a scheme to defraud Punjab National Bank (PNB) and other banks of over $1 billion by a “shell game,” where the ball gets bigger with each sleight of hand, and then issue Letters of Undertaking (sort of a guarantee) to PNB and get loans based upon the inflated ball’s value.

“But to get the ill-gotten funds by bank fraud out of his companies, he engaged in a separate fraud to hide those withdrawals for personal benefit as if they were ordinary business transactions,” Batra said based on the court papers.

According to the court order, Levin’s petition sought to recover damages for harm inflicted by Modi and his two accomplices on the debtors and their estates as a result of his six-year extensive international fraud, money laundering and embezzlement scheme.

The scheme resulted in accrual of claims against the debtors of over $1 billion in favour of Punjab National Bank, the diversion of millions of dollars of the debtors’ assets for the benefit of the family of Modi and Bhansali, and the collapse of the debtors and the resulting loss of value of their businesses.

“The court’s refusal to dismiss RICO (Racketeer Influenced and Corrupt Organizations Act) count is legally satisfying, but there is a hole in this celebration by law abiding banks and people: once the appeals are taken, and Modi remains charged with the US Trustee’s amended complaint, in whole or in part, and the case goes to a jury and wins a judgment, it’s only the assets Modi and his cohorts then have can they be compelled to disgorge,” Batra said.

“Here, as in every type of “pump and dump” cases, it’s not what was fraudulently taken from Banks' remains, but the size of the original ball’s value in the shell game, less high living expenses, waste, defence fees, etc. Today is a great day for the rule of law, thanks to Judge Lane, as now Modi’s US companies, run by the US Trustee, are going after Modi and his co-defendants so Punjab National Bank can get 10-25 cents on the dollar,” Batra told PTI in response to a question.

Nirav Modi, associates, scheme to get funds without collateral

According to the court ruling, from early 2011 to early 2018, Modi and his associates orchestrated and carried out a scheme to “obtain loans, credits, or other funds under false pretences and without collateral” from numerous banks, including the PNB.

The bank fraud involved the use of letters of undertaking (LoUs), a financial instrument unique to India, designed to facilitate efficient import transactions.

Modi and the co-conspirators sought to artificially inflate the import volumes of Modi’s India-based companies with sham transactions so as to obtain more LoU funding, it alleged.

Creation of web of shell companies

To carry out this scheme, Modi and his co-conspirators used a web of shell companies known as “shadow entities” based in Hong Kong and Dubai that posed as legitimate businesses to create fake import transactions and launder the proceeds, it said.

The PNB and the other defrauded banks are reported to have lost in excess of $1 billion as a result of the fraud, the judge wrote in his order.

In his petition, Levin listed examples of how Modi, Bhansali and Gandhi directly benefited from fraudulently issued LoUs and were involved in circular transactions until early 2013, when the debtors no longer directly participated in import and export transactions underlying LoU issuances and instead received proceeds indirectly through the “shadow entities”.

Meanwhile, the UK’s Crown Prosecution Service (CPS) said in August that it is reviewing the London High Court ruling to grant Modi permission to appeal against his extradition order with the Indian government for the next stage in the legal process.

The CPS, which represents the Indian authorities in court, highlighted that the appeal can be heard at a full hearing on two grounds related to the mental health of the diamantaire, who is lodged at Wandsworth Prison in south-west London as he fights his extradition to face charges of fraud and money laundering in the estimated USD 2-billion Punjab National Bank (PNB) scam case.

Modi is the subject of two sets of criminal proceedings, with the CBI case relating to a large-scale fraud upon the PNB through the fraudulent obtaining of letters of undertaking (LoUs) or loan agreements, and the ED case relating to the laundering of the proceeds of that fraud.

He also faces two additional charges of "causing the disappearance of evidence" and intimidating witnesses or “criminal intimidation to cause death”, which were added to the CBI case.