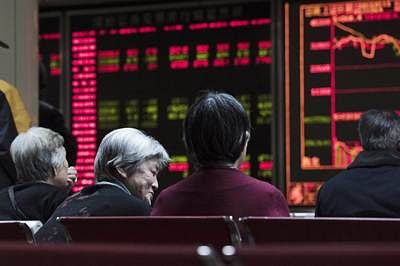 Nifty could not hold on to the intraday bounce after a weak opening on May 10 and closed in the negative for the third consecutive session. Post-1445 Hrs, it sold off to close 0.38 percent or 61.8 points lower at 16,240.

The fact that the Nifty closed almost at the intraday low after making an attempt to recover does not portend well. 16,341-16,013 could be the band for the Nifty for the near-term, Jasani said.

Prashanth Tapse, Vice President (Research), Mehta Equities Ltd, said, Despite the upsurge in overnight US markets, SGX Nifty is trading below the dotted lines, indicating a nervous start for our stock markets. Sentiments will be mostly negative during the trading session, as negative factors will continue to weigh on investors' minds.

FIIs have continued with their exit strategy and sold shares worth Rs 3,960.59 crores on Tuesday. The rising interest rate scenario across key nations have raised concerns of a fragile economic growth going ahead. Technically speaking, Nifty’s interweek support is seen only at 15,901 mark and below the same expect a waterfall of selling towards 15,200-15,250 mark, Tapse said.

Mohit Nigam, Head - PMS, Hem Securities said, The Indian market is projected to open flat, according to the SGX Nifty and global trends. The US stock market was trading higher, recovering from a recent sell-off triggered by concerns about inflation, rising interest rates, and the possibility of a worldwide recession. The rising dollar index and the extended crisis in Ukraine have changed international dynamics and increased selling pressure internationally in recent weeks. As a result, market direction is very erratic and tough to predict. Indian markets are extremely volatile as a result of FII selling, rate hikes by the US Fed and RBI, growing inflation, and continuous geopolitical tensions between Russia and Ukraine.

Positive geopolitical developments, as well as stronger-than-expected critical macroeconomic data, may assist to change the tide and entice investors to return to the equities market. Investors should exercise caution in the markets, and we recommend accumulating some liquidity during the current decline, as uncertainty and volatility are likely to linger for some time. In these situations, investors should exercise caution and take advantage of market declines to acquire fundamentally sound securities.

Asian stocks inch up from near two-year lows

Asian stocks edged higher on Wednesday from close to two-year lows hit in the previous session and the dollar held steady, ahead of keenly awaited US inflation data that will offer a guide to how aggressively the US Fed will raise rates.

MSCI's broadest index of Asia-Pacific shares outside Japan rose 0.45 percent, trading marginally above its lowest level since July 2020 touched the day before. Japan's Nikkei gained 0.3 percent. Chinese blue chips led the gains, rising 1.5 percent after producer prices in the world's second largest economy rose at the slowest pace in a year in April, leaving room for more stimulus to shore up an economy facing pressure from COVID-19 restrictions.

Major US stock benchmarks ended mixed Tuesday, with the Dow Jones Industrial Average booking a fourth straight day of losses, on the eve of a key inflation reading. The S&P 500 and Nasdaq ended higher on Tuesday, with big growth shares rising after the previous day's selloff as Treasury yields tumbled.

The Nasdaq rose 0.98 percent and the S&P 500 gained 0.25 percent but the Dow Jones Industrial Average fell 0.26 percent. U.S. Treasuries were also quiet ahead of the data. The benchmark 10-year note yield was steady at 2.9869 percent, having fallen overnight from a three-year high.

Uncertainty around the economic outlook as the Fed pursues an aggressive cycle of rate increases and other measures aimed at reining in inflation running at its hottest in more than four decades has unsettled investors.

April’s consumer price index report is expected to show inflation has already reached a peak — a development that some investors say could temporarily soothe markets.

China's producer prices rose at the slowest pace in a year in April, despite the surge in global commodity prices, leaving room for more stimulus to shore up the flagging economy, which faces pressure from heavy COVID-19 curbs.

The producer price index (PPI) rose 8.0 percent year-on-year, the National Bureau of Statistics (NBS) said in a statement on Wednesday, following an 8.3 percent rise in March and faster than the 7.7 percent growth tipped by a Reuters poll. The consumer price index (CPI) gained 2.1 percent from a year earlier, the fastest pace in five months, speeding up from March's 1.5 percent growth and beating expectations for a 1.8 percent rise.

Sebi on Tuesday derecognised Indian Commodity Exchange Ltd saying the bourse does not have sufficient number of experienced staff and requisite financial capacity.

Consequently, ''ICEX shall cease to be a recognised stock exchange,'' Sebi said in an order. ICEX (Indian Commodity Exchange) was recognised as an exchange under forward contracts through a notification issued in October 2009 by the central government on a permanent basis.

SBI board approves $2-billion fundraise via bonds for FY23

The board of State Bank of India (SBI) on Tuesday approved the bank’s proposal to raise up to $2 billion through debt securities in the international market in FY23. The approval applies to long-term fundraising in a single or multiple tranches under Reg-S/144A, through a public offer or private placement of senior unsecured notes in US dollar or any other convertible currency.

Fuel prices remain steady on Wednesday, May 11, 2022 with the petrol, diesel prices staying unchanged for 35 days. Fuel prices were last hiked on April 6 by 80 paise a litre each.

Gold and silver prices continued to deteriorate despite some relief seen in the US dollar and US bond yields. On Tuesday, Gold and Silver rallied a bit in the morning session but couldn't hold on to their gains and slipped to close below the importance support levels of $1840 for gold and $21.30 in case of silver. In the international markets, gold settled at $1,841, down by 0.95 percent, and silver ended at $21.42, down 1.81 percent. Bullion prices also settled on a weak note in the domestic market, as gold settled at Rs 50,586, down 0.73 percent, and silver closed at Rs 60,618, down 1.43 percent.

Rahul Kalantri, VP Commodities, Mehta Equities Ltd. said, Gold and silver prices crashed on Tuesday after the US Federal Reserve member said aggressive interest rate hikes could be undertaken to control inflation. The dollar was choppy on Tuesday, fluctuating between modest gains as traders were getting ready for Wednesday's US Consumer Price Index data, which could provide hint on the likely path of the Federal Reserve's monetary policy. Investors have been in a risk-on mood, as the yield on the benchmark US 10-year note eased back below the 3 percent psychological level and from the highest levels since 2018 at 3.20 percent scored on Monday.

The dollar index witnessed high volatility and extended gains to settle at 103.935, a gain of 0.15 percent on Tuesday. The USD-INR 27 May futures contract settled on a slightly weaker note at 77.4450 (LTP) with a loss of 0.28 percent on the National Stock Exchange. Rahul Kalantri, VP Commodities, Mehta Equities Ltd said, the dollar index extended its gain after a US Federal Reserve member said that 75 basis point rate hikes could be seen in the next policy meetings. "We expect the rupee to remain volatile in today’s session ahead of the US inflation data and could face steep resistance around 77.00 levels, while upside support is at 78.10. Looking at the technical set-up, if a pair sustains above 77.55 levels, it could witness further strength towards 77.80-78.05 levels", Kalantri said.