Usama Rathore has 90 days to find a new job, if he wants to avoid being ousted from the US because of his visa status.

From Elon Musk to CEOs at Cisco and Salesforce, tech bosses justifying mass layoffs focus on cost cutting and restructuring, while real dreams of budding innovators are shattered. As the media spotlight moves to another tech firm cutting jobs, those affected wake up to struggles with their expenses and visa status, while the ones still employed live in fear of losing work. The US H1B visa is among the most sought after for techies aspiring to be the next Satya Nadella or Sundar Pichai, but the same has now left Indians laid off by big tech, desperate for new jobs.

The human cost of layoffs

The heartbreaking stories include women on maternity leave, with children to care for, left vulnerable after receiving termination letters in the middle of the night. Alongside Indian-origin employees sharing their stories and seeking alternatives on LinkedIn, a Pakistani engineer at Amazon, Usama Rathore has also written how he has only 90 days left to find a new job. 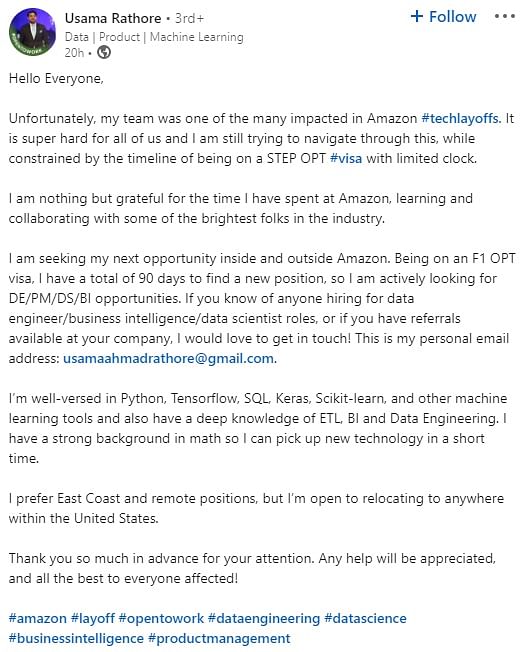 The data engineer who worked for the machine learning vertical, now seeks data science and business intelligence roles, to avoid having to leave the US.

He is on a F1 visa, which is given to trainees, with a 24-month extension under the STEP OPT provision, and is now uncertain about his future after finding his dream job. Usama has also written that he is grateful for his time and all that he learnt at the tech behemoth, even as he is left out in the cold in American tech’s cruel winter plagued by job loss.

Together in a crisis

Usama’s situation is a lot like that of an Indian engineer who reached out for jobs with a similar post, that highlighted his need for finding new work, if he wanted to stay in the US. Both US residents and a large immigrant workforce in the US is hit by the layoff wave, which doesn’t seem to be ebbing with Google simply announcing that it’s firing 10,000 poor performers.