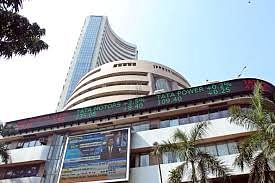 Contrary to global cues, the Indian stock markets opened on a positive note on May 10.

Asian shares tumbled to their lowest in nearly two years on Tuesday as investors shed riskier assets on worries about higher interest rates and their impact on economic growth, while the dollar held near 20-year highs.

MSCI's broadest index of Asia-Pacific shares outside Japan was down 0.8 percent, falling for a seventh straight session and extending declines to 17 percent so far this year. Across Asia, share indexes were a sea of red. The Nikkei lost 0.9 percent, Australian shares shed 2.5 percent and Korean stocks lost 2 percent.

S&P 500 stock futures and Dow Jones futures both fell 0.5 percent and Nasdaq futures were down 0.6 percent. "The idea of a benign and gentle tightening cycle has evaporated," ANZ analysts said in a report.

The government, which raised Rs 20,500 crore from sale of 3.5 percent of its stake in the country's largest insurer, however, shrugged off the muted participation of foreign investors, saying the issue was an example of 'Atmanirbhar Bharat' (self-reliant India) and the issue saw interest from a cross section of investors.

With LIC IPO receiving a good response, traders will bring the full focus back to the secondary markets said Jasani. The higher listing of Campus IPO could improve sentiments. The Russian President's address in the course of May 9 celebrations did not bring any fresh negatives, he added.

The Nasdaq suffered its biggest three-day point decline on record, while the S&P 500 slipped below 4,000 for the first time in 13 months. Investors are assessing the risks of continued high inflation against the prospects of weakening growth, combined with the need of policy makers to continue lifting interest rates. There are concerns about the Federal Reserve’s ability to tame inflationary spirals without throwing the economy into a recession.

Prudent Corporate Advisory Services on Monday said it has raised a little over Rs 159 crore from anchor investors ahead of its initial share sale.

The company has decided to allocate a total of 25,30,651 equity shares to anchor investors at Rs 630 apiece, aggregating the transaction size to Rs 159.43 crore, as per the circular uploaded on BSE.

In April, China's export growth dropped to its lowest level in over two years, while imports scarcely moved, as the curbs introduced to battle COVID has hit factory production, disrupted supply chains and weakened domestic demand too, The Guardian reported.

Exports slowed to 3.9 percent year-on-year in April, the weakest since June 2020.

Oil prices closed 6 percent lower to start the week. Crude tracked a selloff in global assets on Monday, with the commodity pressured as Saudi Arabia cut prices for Asian customers, and, elsewhere, China reported sharply weaker export data. In the international markets, WTI crude settled at $103.09 per barrel and Brent settled at $105.07 per barrel. Domestic markets also settled on a weaker note at Rs7,979 per barrel, down by 5.54 percent.

Crude oil prices also slipped amid rise in the U.S. dollar and bond yields. The dollar index is hovering near 20-year highs and U.S. 10-year bond yields are also trading near four year highs and pushed global commodities lower. Crude oil also fell due to China’s fragile economy, after data showed exports rose just 3.9 percent on year in April, after a blistering 14.7 percent gain in March. The slowdown came as COVID lockdowns hit supply chains and closed factories, adding to worries about growth in the world’s No. 2 economy.

Gold and silver prices extended losses on Monday as the dollar rallied to two-decade highs while US Treasury yields also advanced, curbing investors’ enthusiasm for the safe haven metal.

Bullion has been sliding since mid-April as the Federal Reserve and other central banks tighten policy to fight rising consumer prices. The monetary squeeze has sent yields on US government bonds past 3 percent and fueled five weeks of gains for the dollar, making non-interest-bearing gold less attractive.

Still, there could be more bond market swings to come as a swathe of inflation data feeds the debate on price pressures and monetary policy. US consumer prices are set to be released on Wednesday, with China, India, Mexico and Brazil also reporting during the week.

The USD-INR 27 May futures contract settled on a positive note at 77.6650 (LTP) with a gain of 0.76 percent on the National Stock Exchange on Monday. The dollar index is hovering near 20-year highs amid fears of further interest rate hikes by the US. Federal Reserve in the upcoming policy meetings. The dollar index witnessed high volatility and extended its gains. The dollar index settled on a slightly positive note at 103.778 with a gain of 0.09 percent on Monday. Looking at the technical set-up, if a pair continues to sustain above 77.55 levels, it could show further strength towards 77.80-78.05 levels; 76.60 acts as a major support for the pair. Strength in the dollar index, the US bond yields and sell-off in the domestic equity markets pushed the rupee lower. Besides, the rupee also showed weakness due to falling foreign exchange reserves and widening trade deficits. Rahul Kalantri, VP Commodities, Mehta Equities Ltd. said, We expect the rupee to remain weak this week and could test 77.8000-78.0500 levels.