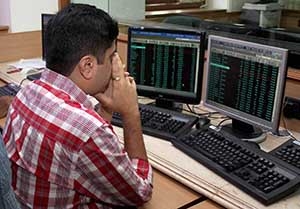 Tata Steel was the top loser in the Sensex pack, plunging 8.27 per cent, followed by SBI, Dr Reddy’s, Sun Pharma, Kotak Bank, L&T and Bajaj Auto. All the sectoral indices closed in red except FMCG gained 2.3 percent whereas the Metal index was the top laggard with a loss of 6.7 percent. Negative global cues subdued India's key equity market indices' during the mid-afternoon trade session on Friday.

"Nifty closed negative in the second consecutive trading session today. It closed at 16,415 down by 150 points. Nifty has strong support at 16,350 and closing below that may take Nifty to 16,150 and 16,000 levels. Traders having long positions should keep strict stop loss to book profits and protect capital. New longs in Nifty should be considered only on closing above 16,550 levels with higher than average volumes," Gaurav Udani, CEO & Founder, ThincRedBlu Securities.

Sachin Gupta, AVP, Research, Choice Broking, said, "Technically, the Nifty index has confirmed a breakdown of the Dark Cloud Cover Candlestick pattern, which indicates some correction in the counter. A momentum indicator turned lower from the overbought zone while Stochastic has suggested negative crossover. However, on the four hourly charts, the index has settled above 21-EMA, which acts as immediate support for the counter. At present, the nifty index is finding the key resistance at 16,700 levels while immediate support is at 16,250 levels."

After witnessing a splendid rally that continued in the first two sessions of the week, markets have come under profit-taking thereafter amid worries of stretched valuations and lack of fresh positive triggers, said Shrikant Chouhan, Executive Vice President, Equity Technical Research, Kotak Securities Ltd. "Technically, the Nifty has formed a shooting star kind of reversal formation and at the same time momentum indicators also suggest a temporary overbought situation. However, the medium term texture remains bullish and any meaningful short-term correction would be an opportunity to enter into the long side.

Ujjivan Small Bank fell over 19 percent after the MD & CEO resigned. Aarti Industries announced the demerger of its pharma business, shareholders get 1 share for every 4 shares held. CarTrade witnessed weak listing on bourses, closed 7 percent lower at 1,501. India VIX surged 8.52 percent to 14.01. On the technical front, 16,300 and 16,750 are immediate support and resistance in Nifty 50, Nigam added.

Deepak Jasani, Head-Retail Research, HDFC Securities said, "Nifty snapped a two week winning streak and ended lower by 0.48 percent. In the process it formed a doji like pattern on weekly charts suggesting indecision at higher levels. Over the week, FMCG and IT were the main gainers while Metals, Media, PSU Bank and Realty lost the most. Global worries (Fed withdrawing stimulus, Delta Variant spread, Slowing global growth and China’s regulatory tightening) are impacting sentiments of investors in India. The broader market rally seems to be fizzling out. Nifty could remain in the 16,540-16,280 band for the better part of the coming week."