Sensex, Nifty back in red as selling in last hour of trade wipe out early gains; IT, Auto stocks lead fall 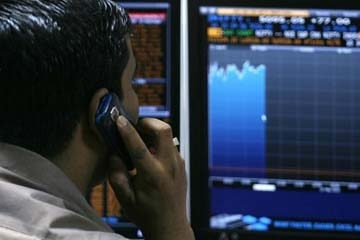 Thebenchmark indices witnessed a highly volatile session on November 24 with Nifty closing below 17,500 dragged by Auto, IT, FMCG stocks.

Gaurav Udani, CEO & Founder, ThincRedBlu Securities said, "Nifty experienced selling around its resistance level of 17,600. It closed at 17,360, down by 145 points since November 23 close. Nifty is currently in a weak trend and it may test its support zone of 17,200-17,250 in the next few trading sessions. Traders are suggested to exit long position on rally and not to initate any new long positions till we see a closing above 17,850 in Nifty."

Shrikant Chouhan, Head of Equity Research (Retail), Kotak Securities Ltd., said, "After a sharp recovery on Tuesday, the markets lost ground once again due to tepid global market conditions and profit booking at higher levels in the last hour of trading session. While Nifty failed to surpass the 17,600 resistance level, the index has formed a bearish candle along with lower top formation. Ahead of the monthly F&O November series expiry, the market is likely to trade within the range of 17,340 to 17,520. Below 17,340, the uptrend would be vulnerable."

Deepak Jasani, Head of Retail Research, HDFC Securities, said, "Nifty reversed the gains of the previous day displaying that the bounce so far is feeble. Advance decline ratio however ended in the positive. Nifty turned back from 17,600 levels. Now 17,280 could be a crucial support to track while 17,613 continues to the resistance."

Mohit Nigam, Head - PMS, Hem Securities said, "Investors continued showing buying interest for Latent View Analytics. The stock has almost tripled after its debut as the stock rallied as much as 20 percent to hit a record Rs. 586.50 on the NSE. It was the third-biggest IPO gainer on debut. Shares of One97 Communications (Paytm), recovered sharply today, by almost 19 percent to hit Rs. 1777 on the NSE."

Sachin Gupta, AVP-Research, Choice Broking said, "After a positive opening, the benchmark index was trading in the range, but in the second half of the session, the index wiped out all the day's gains and shifted into negative territory. Technically, on the daily chart the index has failed to sustain at higher territory as it has tasted the neckline of the Head and Shoulder pattern and moved lower again, which indicates some weakness for the coming day. However, the previous day, the index took good support at lower Bollinger Band formation and pulled up from 17,200 levels, which acts as immediate support for the near term. At present, The Nifty has immediate support at 17,200 levels while resistance at 17,650 levels. On the other hand, Bank Nifty has support at 36,650 levels and resistance at 38,000 levels."