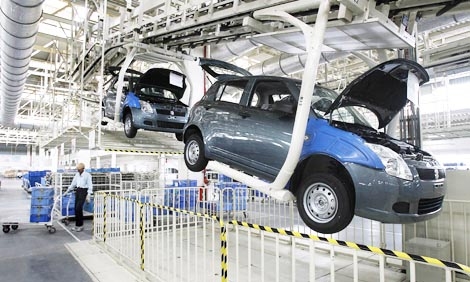 Domestic auto sector can continue to face supply chain headwinds, especially due to semiconductor chips shortages, over the remainder of FY22. / Representational image |

Tata Motors will be forced to cutdown output in the coming months due to shortage in availability of semiconductors. In an interview with The Hindu, Tata Motors’ PV head Shailesh Chandra was positive about festive demand. However, he said, "Demand will not be an issue, but the issue will be on the supply side and it is the only fear that we have," he said.

Noting that chip shortages are hurting production and should impact August-September wholesales, Jefferies said, "companies such as Maruti, Bajaj and Royal Enfield have seen an increased impact in the September quarter."

The recent pandemic-related lockdown in Malaysia might add to the constraints, it added.

Semiconductors are silicon chips that cater to control and memory functions in products ranging from automobiles, computers and cell phones to various other electronic items.

The shortage of such a crucial component has been impacting the automotive industry globally along with other industries, forcing them to cut down on production.

“The domestic auto sector could continue to face supply chain headwinds, especially due to semiconductor chips shortages, over the remainder of the financial year 2022. This is likely to curtail the sales growth expected for the auto industry in FY22, particularly in the passenger vehicles (PV) segment, and also adversely impact profitability,” said Pallavi Bhati, senior analyst at Fitch-owned India Ratings and Research to The Week.

The Mumbai-based company is looking at various measures, including direct buying from stockists and making changes in the product configurations, to offset the impact of semiconductor shortage on its production activities and sales, a top company official said recently.

"Yes, we are definitely impacted because of uncertainty of supplies but so far we have been able to manage somehow," Chandra told PTI last month when asked if the company was facing issues in its production activities due to semiconductor shortage.

He said the company is mulling reworking some of the product variants in order to minimise the production loss.

"We are looking for alternate semiconductors and at times procuring directly from stockists. We are also trying to see if a more standard chip can be used in certain components where we are facing stress. Besides, we are looking at trim mix so that we don't lose on the sales," he added.

The company is working very closely with chip suppliers as well to manage the situation, Chandra stated.

Semiconductors are silicon chips that cater to control and memory functions in products ranging from automobiles, computers and cellphones to various other electronic items.

The usage of semiconductors in the auto industry has gone up globally in recent times with new models coming with more and more electronic features such as bluetooth connectivity and driver-assist, navigation and hybrid-electric systems.

Industry experts feel that enhanced demand for automobiles in the last few months has put pressure on the global supply chains leading to a shortage.

Jaguar Land Rover, which is owned by Tata Motors, is also facing stress on production due to the chip shortage issue.

The British brand expects semiconductor supply shortages in the July-September quarter to be greater than in the first quarter, potentially resulting in wholesale volumes about 50 per cent lower than planned.

Earlier this week, Hyundai Motor India MD and CEO S S Kim had also stated that the automaker is facing issues due to the semiconductor shortages.

"Our production people are managing the situation, they are closely collaborating with our suppliers. Our production is very flexible so that we can adjust as per the situation...we have been affected but not that much," he had noted.

The country's largest car maker Maruti Suzuki India (MSI) on Tuesday said it expects vehicle production in September to be just 40 per cent of its normal output due to the shortage of semiconductor chips.

"Owing to a supply constraints of electronic components due to the semiconductor shortage situation, the company is expecting an adverse impact on vehicle production in the month of September in both Haryana and its contract manufacturing company, Suzuki Motor Gujarat Pvt. Ltd. (SMG) in Gujarat," MSI said in a regulatory filing.

Though the situation is quite dynamic, it is currently estimated that the total vehicle production volume across both locations could be around 40 per cent of normal production, it added. The company's production capacity at Gurgaon and Manesar plants in Haryana is around 15 lakh units per annum.