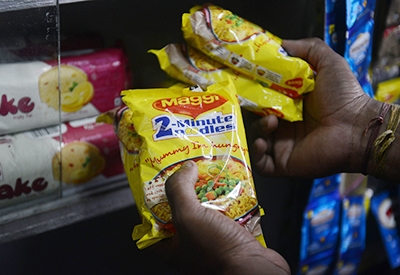 An Indian shopkeeper arranges packets of Nestle 'Maggi' instant noodles from the shelves in his shop in Siliguri on June 5, 2015. India's food safety regulator on June 5 banned the sale and production of Nestle's Maggi instant noodles over a health scare after tests found they contained excessive lead levels. AFP PHOTO/Diptendu DUTTA |

Swiss food and drink company Nestle has reported a 'mid-single-digit growth' in the Indian market in the July-September quarter, helped by its popular brands Maggi, Nescafe and KitKat.

Overall, the South Asian market has "continued to perform well", Nestle said on Wednesday in its post earning statement.

The Indian market was ranked at number 13 in terms of contribution to Nestle's global revenue in 2019.

"Sales in the Philippines grew at a double-digit rate, with elevated consumer demand for Bear Brand, Milo and Maggi. Indonesia delivered high single-digit growth, led by Bear Brand, Dancow and Milo," it said.

Sub-Saharan Africa grew at a double-digit rate, with strong growth across most of the markets.

"Growth in Japan, South Korea and Oceania was slightly positive. Oceania reported strong growth across most product categories, particularly in coffee and confectionery. Japan saw a decline in sales, with some improvement in the third quarter. KitKat sales declined in Japan, impacted by a reduction of inbound tourists," it said.

Nestle has reported sales of 61,912 million CHF (Swiss Franc) for the nine months.

"Organic growth reached 3.5 per cent, with RIG (Real internal growth) of 3.3 per cent. Pricing contributed 0.2 per cent. Organic growth improved to 4.9 per cent in the third quarter," the company said.

It has also raised its guidance for 2020 organic sales growth.

"We expect full-year organic sales growth around 3 per cent. The underlying trading operating profit margin is expected to improve. Underlying earnings per share in constant currency and capital efficiency are expected to increase," the company said.

Nestle India is scheduled to announce its result for the July-September quarter on October 23, 2020.