HomeBusinessMusk tweets that the bird is free, here’s how Twitter and Tesla stocks moved to his tunes on Nasdaq

Musk tweets that the bird is free, here’s how Twitter and Tesla stocks moved to his tunes on Nasdaq

While Twitter’s stock has continued to make gains, inching closer to Musk’s offered price, Tesla has been under pressure since the deal was announced.

Elon Musk enters Twitter HQ with a sink in his hands, tweets 'let that sink in'. |
Follow us on

Elon Musk’s acquisition of Twitter has started off with big ticket exits and uncertainty about how he wishes to change the social media giant. The billionaire has said that he has taken over the microblogging site to help humanity and not to make more money.

the bird is freed

But at the same time Musk has sent out another cryptic tweet that says “the bird has been freed”, which has left everyone wondering about the changes he might make at Twitter.

The value of Musk’s online moves 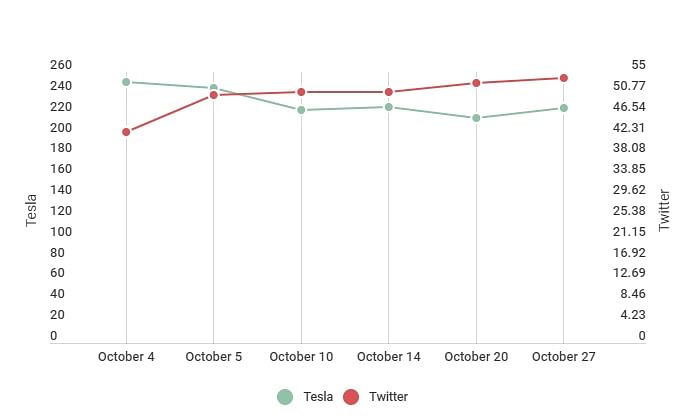 The trajectory of Tesla and Twitter stocks throughout this month. |

Musk’s tweets are known to impact stock prices and cryptocurrency rates, and while he is paying $54.20 a share to acquire Twitter, the social media giant’s stock closed at $53.35 per share on Wednesday.

But trading for Twitter’s share will remain suspended on the NYSE, as Elon Musk inches closer to completing his acquisition of the company.

October 4th: Twitter’s stock had surged almost 13 per cent to $47.93 a share, after reports that Musk had agreed to complete the acquisition.

October 28th: With trading halted, there’s a difference of less than $1 between Twitter’s stock price and the the rate per share offered by Musk.

On the other hand Tesla’s stock was driven up to $225 per share by October 28. but the EV maker has been under pressure, with concerns about Musk offloading more of his stake in the firm to finance his Twitter deal.

October 5th: Tesla stocks plunged by 5.4 per cent to hit $245 per share, a day after Musk agreed to buy Twitter.

October 7th: Tesla had slipped to $223 per share, after its worst week since the pandemic’s peak in March 2020, losing 16 per cent.

October 27th: Tesla had recovered to open at $229 a share, the day before the Twitter deal deadline, but slid down to close at $225.

How the drama played out

Before he took a U-turn and was dragged to court by Twitter to complete the acquisition, Musk had made a bid to buy the platform with an intention to unleash absolute free speech. He had also said that he will restore former US President Trump’s account, indicating that safeguards against misinformation and hate speech may also be lifted. Advertisers were also concerned about Musk’s earlier stance on content moderation, but the billionaire contradicted himself by citing bots or fake accounts as a reason to cancel his plans to buy Twitter.

Finally with the matter in court, the two parties mutually agreed to seal the deal, and were given a deadline of October 28 by a Dewalare judge. With final details being ironed out and CEO Parag Agrawal out of Twitter, Musk has assured advertisers that the platform will be warm and welcoming for all. He also added that the space won’t become a free-for-all environment where anyone can post anything they want without repercussions.