IHCL launches new exclusive Taj The Chambers club in London; all you need to know 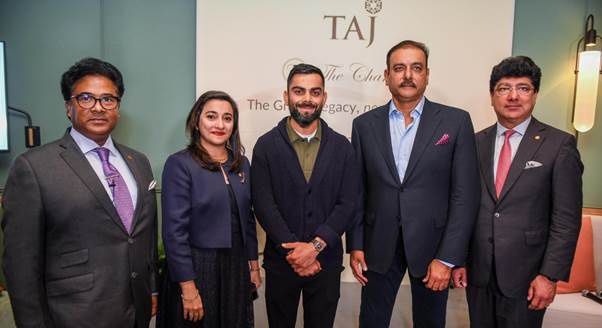 The Indian Hotels Company Limited (IHCL) has launched its newest membership club, Taj The Chambers, in London as part of a wider "Re-imagined" worldwide drive for India's leading hospitality brand.

IHCL Managing Director and CEO Puneet Chhatwal formally announced the opening of the new exclusive wing within the Taj 51 Buckingham Gate Suites and Residences in the heart of London at a special ceremony on Tuesday evening.

He also welcomed the Indian cricket team, which is currently in London ahead of its fourth Test clash with England at the Kia Oval.

"We are very pleased that the cricket team is here and that it is opening with a series which became synonymous during COVID with The Chambers, called the Rendezvous Series," said Chhatwal, in reference to an event held to mark the Chambers London launch entitled Rendezvous with Ravi Shastri on his new book 'Stargazing: The Players in My Life'.

"The Chambers is a special private membership club, very closely associated with the hotel brand Taj. It is really for achievers and it's by invitation, driven by a process of accepting members and we want to keep it that way, in a very exclusive membership group," explained Chhatwal, in an interview with PTI.

"We go through a process, which includes a background check. We are not like a new kid on the block; the Taj is now in the 118th year of operation. And, Brand Finance UK rated Taj as the strongest hotel brand in the world in the most recent announcements they made," he said.

Chhatwal described The Chambers - which has also recently been refurbished at the Taj Mahal on Mansingh Road in New Delhi - as a "unique value proposition", which is even more sought after now because of COVID due to the need for safe spaces.

"Anybody coming in and out has achieved a certain status in life and understands the value of safety," said Chhatwal.

The Global Membership of The Chambers, which comes with a one-off fee of around 20,000 Pounds and an annual fee of estimated 3,000 Pounds, means anyone within that exclusive group now has an additional venue to take advantage of special privileges and access.

For the London market only, a special national-only membership is also in the works to cater to people who may not have immediate travel plans to India due to the COVID constraints.

"We decided to make that as an exception because a lot of Londoners would be left out or people in the UK who are interested may have no plans to travel to India in the next few years. So, in time of the launch we decided to also have a national membership which gives you access only to London Chambers," explained Chhatwal.

"Most importantly, this is a lifetime membership and you can pass it on to the next generation, subject to the same criteria being met as the initial stage of the membership. So, this becomes a very compelling proposition when you look at the time value of money over 20-30 years," he said.

IHCL's "Re-imagine" plans include a new Chambers to be launched in Bengaluru in the coming months, with New York planned after that.

"A lot depends on the COVID situation. The hospitality and tourism industry suffered the most; is still suffering the most. We coined a new term - Strategy and Agility combined to make up Stragility, which was to do the best under the circumstances. Maybe that's another reason making us the strongest brand in the world," said the well-heeled hotelier.

With things in the hospitality sector now getting close to 70 per cent of pre-COVID levels on the domestic front in India, he also expressed much optimism for the sector.

"Save for a (COVID) third wave and a few areas, Kerala for example, slowly we are seeing things going back to normal; backed up with the vaccination drive," he said.

Asked if there are aspects of the sector that have changed forever, Chhatwal declared that the era of "over-service" and "wastage" is making way for a more back to basics and essentials approach.

"It's not all just a cost-saving move but an awareness about wastage. So, the quality is going up, the cost remains the same, but waste is going down. Guests want responsible tourism, which is not just a result of COVID but also greater climate impact awareness," he explains.

Chhatwal, who has been in the global hotel business for many years and at the helm of Taj since 2017, reflected on how the historic hotel chain has lived through many crises from its rooms being used for hospital beds during the World War to terror attacks.

"This has been a brutal one because you don't see the enemy. If this virus is the enemy, we have a job to do to protect people and also at the same time not let our industry stay paralysed. Every job created in the tourism sector creates seven to 12 jobs indirectly in other sectors. So, there's a larger cause to all this," he said.