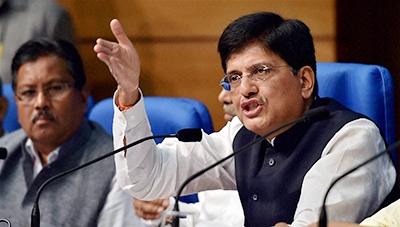 Commerce Minister Piyush Goyal said creating the semiconductor industry and strengthening the shipping industry will help push the ''Aatmanirbhar'' or self-reliance initiative of the government. |

The government is committed to supporting establishing the semiconductor industry in the country which will also help in reducing foreign exchange outflows, Union minister Piyush Goyal said on Thursday.

The Commerce and Industry Minister's remarks come days after Tata Group announced its intention to enter the semiconductor segment, amid significant shortage of semiconductors worldwide that has also started impacting various industries.

Speaking at an event organised by the commerce ministry, Goyal said creating the semiconductor industry and strengthening the shipping industry will help push the ''Aatmanirbhar'' or self-reliance initiative of the government.

Last week, Tata Sons Chairman N Chandrasekaran announced that the conglomerate is mulling manufacturing the critical components in the semiconductor industry. The group's auto business is itself facing a shortage of semiconductors.

On Thursday, Goyal also hoped that "large corporates" will be taking interest in the shipping industry, which will give the right impetus to the crucial sector for the country's foreign trade.

Acknowledging that EXIM trade is facing issues on the container front, Goyal explained that much of it was due to global problems. The government is trying to be self-sufficient in manufacturing new containers and the state-owned Concor has come out with a policy for the same.

As many as 34 domestic entities have evinced interest in the expression of interest floated by Concor for the container manufacturing contract and added that India has the potential to be self-sufficient on this front as well, he noted.

The minister also assured the industry that there will be consistency in policies. Last week, he had voiced concerns about India Inc allegedly acting against the country's interest and also mentioned about Tata Group's conduct, triggering a controversy.