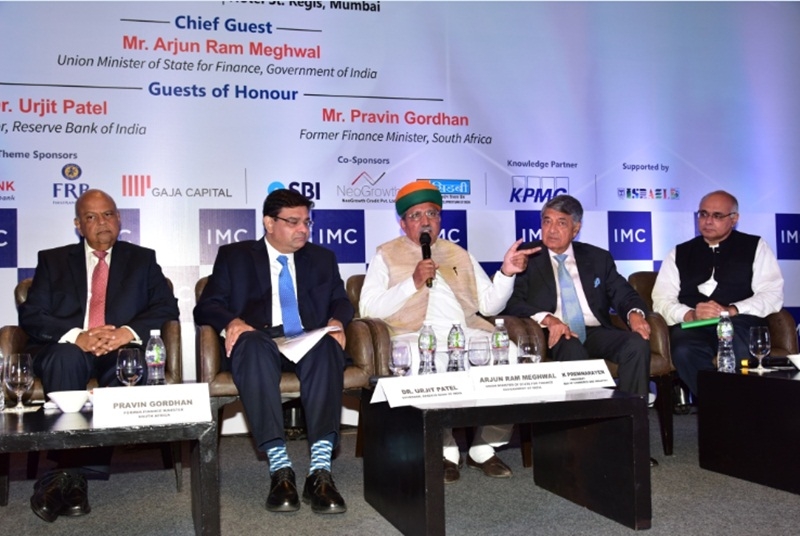 Although the Indian Micro, Small and Medium Enterprises (MSMEs) form the backbone of the national economy, the sector is facing many challenges. Smooth flow of capital will be a big boost to their path of progress…

With a view to burgeoning awareness of the new financial regime among MSMEs, IMC Chamber of Commerce and Industry in association with its knowledge partner KPMG, organised its 9th Banking and Financial Services Conference. During the conference which was held in Mumbai, a white paper titled ‘Catalysing MSME Entrepreneurship in India’ was launched.

At the outset, the welcome address by Deepak Premnarayen, President, IMC Chamber of Commerce and Industry presented an overview of the fast changing business scenario in the country. He also touched on the overall presence and contribution of the MSMEs in the country’s GDP and the need for strategic financial assistance for smooth running and growth of their businesses, post GST (Goods and Services Tax) days. He reminded, “The Indian economy is likely to emerge as one of the leading economies in the world, poised to become a USD 5 trillion economy by 2025. Thus, a major impetus is to be made to strengthen the MSME sector as this has been a significant contributor in generating employment and contributing to the nation’s economy.”

The conference was graced by an august gathering which included representatives from various Indian MSMEs and finance institutions. Union minister for finance, Arjun Ram Meghwal who was the chief guest of the conference, highlighted the steps taken by the union government to usher into a regime of new economic era. He said after last year’s demonetisation, the country has moved towards digital transaction. Earlier, the income tax assessment of the MSME sector was done on 8 per cent of the turnover, now after MSMEs have started digital transaction, it is being done on 6 per cent of the turnover, and thus the sector has got a direct benefit. Also, reduction of corporate tax for MSMEs from 30 to 25 per cent is a big boost for them. Meghwal, extremely optimistic about the positive outcomes of the GST, declared, “2017 will be known as the year of economic reform of the country.” He further explained that GST will make things easier for MSMEs as the total taxation will come down (from around 27.5 per cent to 18 per cent). Focusing on the indirect benefits, he pointed out that in India around 13.5 per cent is paid as logistics cost as against 8 per cent in the developed countries. GST will help in curtailing the cost.

The guest of honour in the conference, Urjit Patel, governor of RBI (Reserve of India), drew attention on the importance of the Indian MSMEs offering innovative and varied goods that could enrich the market as well as generate more employment. However, he stressed on the need for faster clearance of their dues.

He also highlighted the need for streamlining the taxation system. In this context, he stressed on the need for deployment of modern financial and technological tools, and expressed that GST implementation would definitely accelerate the process. Suggesting further adoption of latest technology in business arena, the RBI Governor stated, “Digitisation and application of information technology in the financial processes will gradually help in bringing down the tax burden on the MSMEs.”

While addressing the assembly, the guest of honour in the conference, Pravin Gordhan, former Finance Minister, South Africa, stressed on the uniformity of taxation, construction of an economic framework and adopting global values for the growth of the business eco-systems. Asserting the merits of the GST, he opined, “India will find the benefits of GST in next five to six years.”

Focusing on this emerging issue of apparently shrinking job market in the country, Sopnendu Mohanty, chief fintech officer, Monetary Authority of Singapore stressed on the development of new skills. He also underlined the needs for automation of systems’ infrastructure in the financial sector, and involving researchers for financial products’ policy making.

Expressing great satisfaction on the government’s move with GST, Junaid Ahmad, Country Director (India), The World Bank opined that GST would drive away inefficiency in many areas of business. With high degree of confidence, he explained, “India is the fastest growing country in the world today. With GST and other financial reforms, the country will grow at 8 per cent. But what India needs at this moment is more than 8 per cent growth and that is the aspiration of the government.”

While commenting on the future business scenario in the country, Ahmad said, “India’s growth rate in the coming years will remain on the top of the globe. Projecting forward, this nation will have the largest population in the world, which will create big markets inside the country itself. The nation has a good push from its stock of workforce, if improvement in capital flow happens, you will see a big change. I think the first change will come from the impact of GST that will create a robust market inside the country.” He added that if India begins to improve its efficiency in internal goods movement, then the country will witness a huge growth potential. My own reading is – in the coming years internal goods movement will be stronger than the global goods movement for India. This is something to be watched.”

Addressing the issue of protectionism that is spreading around the world, he further added, “As far as protectionism is concerned, India has two big advantages: size of its internal market and the reforms it is doing. What we have seen globally is that if a country starts improving efficiency of its labour market; easing goods movement and strengthening capital market its ability to adjust to the changes in global market increases. For example, South Korea adjusted quickly to global shocks because it had a firm labour market, a strong capital market and it continuously invested in building internal infrastructure.”

He feels that India has now reached that stage when investment in its own internal projects is going to make a big difference. Citing an example, the World Bank’s country head explained, “Look at the renewable energy sector. India is now slowly becoming a leader in this field because it is using its own market to innovate. The price of renewables auction is coming down – not because the technology is getting cheaper but because India is doing bidding in a better way. So, my belief is – you will see many such internal pushes that will lead innovations to hold the promise of India’s 8 per cent plus growth rate.”

Need for an architecture that works

An obvious reason behind the slow or no growth of the Indian MSMEs is absence of adequate policy framework, which needs to be developed. In a wave of technology-driven reform, the union government and Indian regulators such as Ministry of Corporate Affairs (IMCA), Securities and Exchange Board of India (SEBI), the Reserve Bank of India (RBI) are issuing guidelines to keep up with the changing mode of business.

In today’s changing business scenario impact of internet (e-commerce) and mobile (m-commerce) penetration need not be re-explained. However, many MSMEs are yet to know that effective utilisation of these technologies can unbelievably ease and economise the business processes. Whether it is raw material sourcing or securing a financial assistance, technology can help the MSMEs almost instantly. Also, banks and other financial institutions are systematically deploying Fintech technologies to assess credibility of the MSMEs for sanctioning financial aids.

IMC’s conference turned into a good brain storming platform and that was acknowledged by many attendees. When we interacted with some arbitrarily chosen people from the audience, we got highly positive remarks about the knowledge sharing effort of IMC.

Chartered Accountant Noshir Captain, partner, Chaturvedi Sohan & Co., informed, “Everything is well organised here. I have learnt here more about Indian MSMEs. Also, I have got an overall idea on how the finance should be looked into in the coming days.”

Sunil Sharma, external advisor of an international bank said, “IMC always organises good events, this is one more feather to their cap. I have noted down the new technology-based methods that can be applied to assess loan repayment capacity of the borrowers.”

Sudhakar Malpe, advisor, Cowry Capital Ltd. opined, “This has been an excellent interaction in this platform of IMC. The conference has especially focused on the MSMEs and addressed their anguish, which is often not really attended by the governments or their agencies. Really, these issues need to be addressed at the earliest – as 5.1 crore SMEs are suffering due to negligence. This pushing-under-the-carpet practice cannot continue for long. These issues should be addressed either by the government or by the banks. I appreciate IMC’s effort to address these.”

Shriram Singh, senior vice president, IIFL said, “Digitisation is definitely going to help us a lot. A lot of start-ups are coming up in this space. As a banker, I have seen lot of SMEs that are penetrating in the rural market or kirana stores (high frequency and low ticket type transactions). There is a huge scope once we bring them under main stream finance. All big companies like Google, Facebook etc., were once start-ups, Lalit Kanodia, president-elect IMC stressed. He believes that in the next 10 to 15 years, many Indian MSMEs will grow to that extent. “This event has encapsulated all the points, however, I expect IMC’s next event should delve further to facilitate more detailed discussion on each of these issues separately, and it should go to rural areas to address MSME managements or owners.”

Jyotishman Goswamy from Search Matrix came to the conference to collect information on the ongoing customer evaluation technologies. He said, “I have got a fairly good idea on the criteria that are collected through technology to evaluate the credibility of a customer for online business transaction. IMC’s effort are quite impressive.”​

· In India, 80 million people work in MSMEs and the sector has 37 per cent contribution to the GDP.

· Even today a big section of the MSMEs is unrecognised. Streamlining their operations is essential.

· Understanding the operating environment of the MSMEs is important for supporting them.