HomeBusinessMumbai's Dharavi or Karachi's Orangi Town - which is the largest slum in the world?

Mumbai's Dharavi or Karachi's Orangi Town - which is the largest slum in the world?

Dharavi has a million people crammed into just 2.4 square kilometres, with 20,000 single room factories and an economic output of $1 billion.

Around 42 per cent of the population in India’s financial capital Mumbai lives in slums, which are compressed into 7 per cent of the city’s total land area. The city is home to a massive slum cluster Dharavi, which is also touted as the world’s biggest and has a thriving economy. As the densely populated area with a million residents is set to undergo redevelopment planned 18 years back, it’s time to take a look at the reality behind the hype.

How big Dharavi actually is

With a population of one million packed inside a settlement spread over an area of 2.4 square kilometre, Dharavi can be called the most densely populated slum in the world. In comparison, Pakistan’s Orangi Town slum near Karachi has more than twice the population at 2.4 million, who live in a municipality with a ground area of 32 square kilometre.

Although Dharavi comes after Orangi Town in terms of area and population in Asia, it’s the third largest slum in a global context, right below Neza in Mexico, where 1.2 million people are concentrated in almost 60 square kilometres.

The slum cluster between Mahim, Bandra, Matunga and Sion, has one toilet for almost 1500 people. Everything from pots to shoes to bags to aluminum bricks are made in Dharavi’s 20,000 single room factories and 500 larger units.

With an informal economy that has an output of $1 billion, Dharavi is also an economic zone created by the residents themselves. 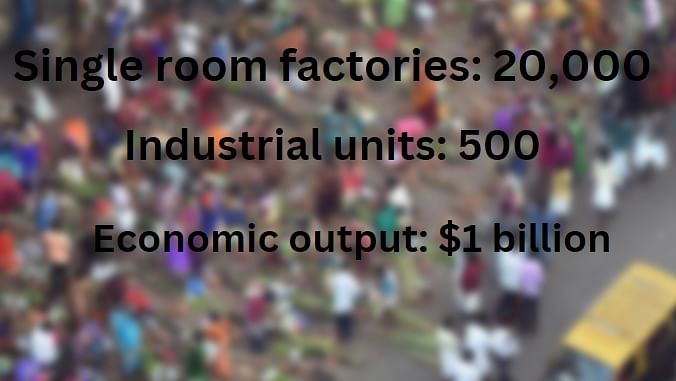 Now that Adani has bagged the redevelopment project for Dharavi with a Rs 5000 crore bid, the residents will be rehabilitated on railway land. There are 58,000 eligible slum dwellers who are covered under this project to revamp an area of 1.78 square kilometres in seven years. A similar number of ineligible slum dwellers will get accommodation on a patch of land 10 kilometres away.

As for the industrial units thriving in the cluster, they won’t be shifted away from Dharavi, but will get concessions by the government for five years, to make up for losses caused by disruption to operations during the project. But the project which has been pushed off for almost two decades, has also raised concerns among residents, about the future of thousands of small-scale businesses in the slum.