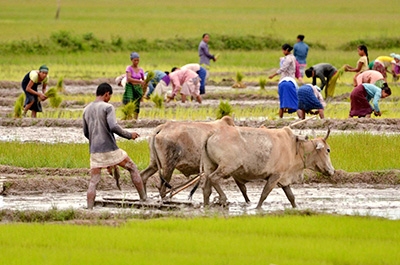 The Centre has procured a record 873.68 lakh tonnes of paddy so far in the 2020-21 marketing year ending September for nearly Rs 1.65 lakh crore.

"About 129.03 lakh farmers have already been benefited from the ongoing KMS procurement operations with MSP value of Rs 1,64,951.77 crore," it said.

Paddy procurement in the ongoing KMS 2020-21 is continuing smoothly in the procuring states. Kharif marketing season runs from October to September.

The Centre has purchased 873.68 lakh tonnes of paddy (including Kharif crop 707.69 lakh tonnes and Rabi crop 165.99 lakh tonnes) till August 23 against 763.01 lakh tonnes in the corresponding period of the previous year.

The food ministry said that the Rabi marketing season (RMS) 2021-22 has concluded in wheat procuring states.

Till August 18, a record quantity of 433.44 lakh tonnes of wheat has been procured as against 389.93 lakh tonnes in the year-ago period.

"About 49.20 lakh farmers have already been benefited from the ongoing RMS procurement operations with MSP value of Rs 85,603.57 crore," the statement said.

The Rabi Marketing Season runs from April to March. However, the bulk of wheat procurement is done during April-June period.