Inclusive development is the government's priority which includes procurement of wheat, paddy, Kharif and rabi crops, benefitting over one crore farmers.. / Representative image |
Follow us on

As expected, the Budget 2022 had a lot to talk about farming. But they all amounted to little. Farmers are bitter about the provisions, or the lack of them.

The finance minister made the following announcements:

The Ken Betwa rivers will be linked, which will provide irrigation benefits to 9.0 lakh hectare farmland, drinking water supply to 62 lakh people, 103 MW hydropower, and 27 MW solar power generation. The total estimated cost of the project is at Rs 44,605 crore. 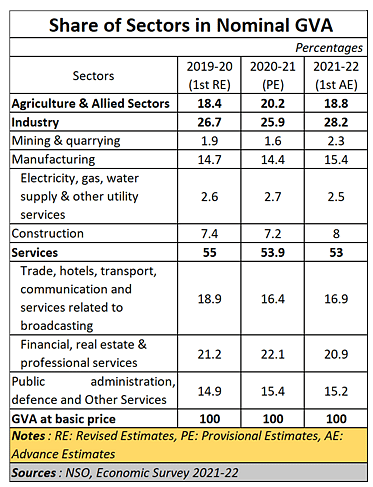 Funds will be facilitated through NABARD to finance startups for agriculture and rural enterprise, relevant for the farm produce value chain. Startups will support FPOs and provide tech to farmers.

Inclusive development is the government's priority which includes procurement of wheat, paddy, kharif and rabi crops, benefitting over one crore farmers. 1,208 lakh MT of wheat and paddy will be procured from 163 lakh farmers. 2.37 lakh crores will be the direct payment of Minimum Support (MSP) value to their accounts.

The government had words; but the spirit was missing.

To understand why, look at the following table. The share of agriculture in India’s GVA declined between last year and this year by minus (-)1.4 percent. Services declined by minus (-) 0.9 percent. The share of industry, however, increased by 2.3 percent. Yet what does the Budget 2022 do? It sets aside more funds for industry, less for services and little for agriculture. This is despite agriculture employing almost 50 percent of India’s population, and services contributing to over 50 percent of India’s GVA (gross value added).

Suddenly, the entire Budget exercise appears to have become a joke to be played out on farmers. Just a week before the Budget was announced, the government rode roughshod over the autonomy that NDDB has enjoyed right from the time Verghese Kurien, the Milkman of India, set it up with blessings from the then prime minister of India, Lal Bahadur Shastri.

Kurien used NDDB for promoting milk cooperatives and stabilising milk prices. In turn, NDDB helped India become the world’s largest milk producer. This was one agri-product which did not witness any decline in market prices thanks to the mechanisms Kurien put into place. No wonder that the farmer in Kurien’s cooperatives had cause for a big smile.

Unlike conventional practices, Kurien ensured that the farmer got 80 percent of the market price of milk. Traditionally, the best that the farmer got was one-third the market price. A third went to the processor, and a third to the aggregator, and market-maker. Kurien made the farmer the centre of agriculture. When the processors and market men protested, he took up processing, procurement, and marketing himself, and got all of it done within 20 percent of the market price. Assured for higher milk prices year after year, the farmer purchased more cattle, and produced more milk. By banning imports, Kurien did not allow foreign players to interfere with domestic prices.

And he did all this without any subsidies from the government. He made the farmer independent of the government – of politicians and bureaucrats. By abolishing the autonomy that NDDB enjoyed, the government wants to introduce subsidies in a healthy sector like milk as well. It wants to wreck a model that has stood the test of time for over seven decades. One explanation for this is that the government wants the vote-bank and cash that cooperatives control. And it wants NDDB to bail out middlemen as well, instead of just cooperatives.

It must be remembered that Uttar Pradesh – which is the largest producer of milk in India – cannot sell to NDDB or the milk cooperatives. NDDB does not deal with middlemen, who have exploited farmers, by paying them the lowest prices for milk in India. Now, NDDB, through Mother Dairy, may be compelled to purchase this milk.

Effectively, the government wants to introduce the system of doles and subsidies in the dairy sector as well, knowing too well that subsidies penalise the efficient, and reward the inefficient and politically connected. The farmer is already facing distressed times. The government’s latest move will distress farmers even more.

At other times, the government has actually allowed imports of edible oils and pulses. It tried to allow dairy imports under the RCEP, but the stiff opposition from 10 crore dairy farmer households (50 crore people), make the government back track.

It has changed stocking limits for agri commodities, banned commodity trading in specific commodities, all of which hurt the farmer, and protect speculators. In other words, the government has disempowered farmers.

Unless this approach changes, expect big trouble on the farm front. The farmer agitation was the first sign of discontent. There could be more turbulence very soon.

(The author is consulting editor with Free Press Journal. He tweets at @rnbhaskar1)