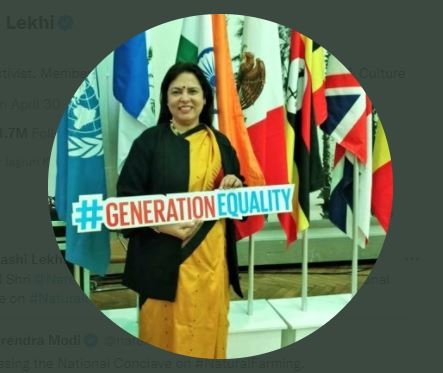 If cryptocurrency is going to be used to launch cyber-attacks in India, to launch other attacks on India, to do other kinds of illegal and unethical work like drug trafficking, I need to stop all that, Minister of State for External Affairs Meenakshi Lekhi said./ Representative Image | Photo: Twitter

As the government prepares the much-awaited Cryptocurrency Bill 2021, Minister of State for External Affairs Meenakshi Lekhi has stressed that cryptocurrencies need to be blocked if used for illegal means to harm the sovereignty and integrity of the country.

Speaking at the sixth iteration of the 'Global Technology Summit' organised by Carnegie India on Wednesday, Lekhi said, "If cryptocurrency is going to be used to launch cyber-attacks in India, to launch other attacks on India, to do other kinds of illegal and unethical work like drug trafficking, I need to stop all that."

"I am sure the Finance Ministry and IT Ministry would have looked deeply into these aspects. The cryptocurrency platforms and exchanges are owned by a set of people who are trying to avoid tax, taking the money out of the country without giving benefit to the country where they produce this wealth," she emphasised during the discussion, titled 'The Future of Technology: Resilience and Partnerships'.

According to media reports, the Cryptocurrency and Regulation of Official Digital Currency Bill, 2021 may not be tabled in the Winter Session of Parliament as the government doesn't want to rush on the law.

The Centre reportedly wants India's crypto regulations to be in line with the global framework.

Finance Minister Nirmala Sitharaman said earlier this month that a collective "global action" is the only way to regulate the evolving technologies, including the cryptocurrencies.

Speaking at the 'InFinity Forum' organised by Bloomberg and IFSCA, Sitharaman noted that no country has found a one-point formula to regulate technology such as cryptocurrency.

"Even as we are thinking about at a national level, there should simultaneously be a global mechanism through which we are constantly monitoring the movement of technology, so that whether it is your cryptocurrency, whether it is tech-driven payment system, data privacy..." she had said.