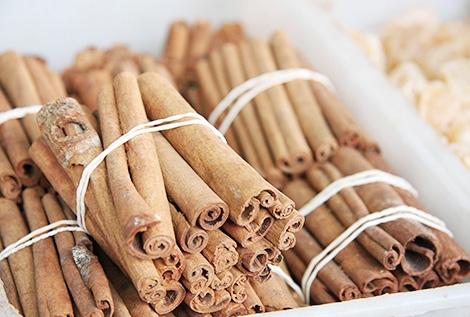 Currently, some species of Cinnamomum genus are growing naturally in the wild in Himachal Pradesh |

Himachal Pradesh's pilot project for the cultivation of aromatic medicinal cinnamon has been a success in Una district and the government is now aiming to go for its commercial cultivation in lower elevations in five districts, state Agriculture Minister Virender Kanwar said here on Sunday.

Currently, some species of Cinnamomum genus are growing naturally in the wild.

With the pilot cultivation of cinnamon, popularly known as 'Dalchini', the state has become first in the country to have its organised cultivation.

Kanwar said the first sapling of cinnamon was planted in the Kholin village in Una on pilot.

The project, conceived by the CSIR-Institute of Himalayan Bioresource Technology (IHBT), is being implemented in association with ICAR's Indian Institute of Spice Research, Calicut in Kerala.

The state has a target to train at least 1,000 farmers in cinnamon cultivation in the lower elevations, particularly in Una, Bilaspur, Kangra, Hamirpur and Sirmaur districts.

In the initial phase, 600 to 700 plants of cinnamon were planted and now a target has been fixed to distribute 40,000-50,000 saplings of cinnamon verum annually free of cost to farmers to propagate its cultivation.

The minister said around 200 hectares will be brought under cinnamon cultivation in five years.

"With moderate temperature in Una, Hamirpur, Bilaspur, Kangra and Sirmaur, these districts are ideal for cinnamon cultivation with an annual rainfall of 1,750-3,500 mm," said Kanwar.

There are two regular harvesting seasons. The appropriate time for cutting the shoots for peeling is determined with reference to the circulation of sap between the wood and the corky layer.

The CSIR-IHBT Palampur will provide the technical know-how and update the skills of farmers, while expertise of national-level agencies will be utilised at a later stage, said Kanwar.

He said the cultivation of cinnamon, one of the most valuable commodities, has the potential to change the economic condition of people in the state.