Sporting boycotts as a message ‘UK, Canada join diplomatic boycott of Beijing Winter Games’ screamed a Reuters headline earlier this month. The boycott is meant to draw attention to the genocide of Uyghur Muslims in Xinjiang, the anti-democratic crackdown in Hong Kong, military aggression against Taiwan and human rights violations including silencing of dissident groups in China by the Chinese Communist Party (CCP). In a recent incident, Chinese tennis star Peng Shuai has disappeared ever since she posted allegations of sexual misconduct against Zhang Gaoli, a former senior Chinese vice premier.

Law-makers are seeking a relatively blunted version of protest - a ‘diplomatic boycott’ meaning that government officials/ministers will not travel for any games-related event. However, athletes who have perhaps waited for a particular chance all their lives, can compete in their chosen disciplines. The US is leading the protest, with UK, Australia, Canada supporting it, while urging others to join. However, human rights organisations want to send a terse message to China by seeking a full boycott of the Winter Games to be held from February 4 to 20, 2022. They believe, just as the 1936 Berlin Games offered legitimacy and credibility to Hitler, China will benefit from a propaganda smokescreen to hide contraventions and abuses by the despotic regime. Human Rights Watch is calling it ‘sportswashing’. 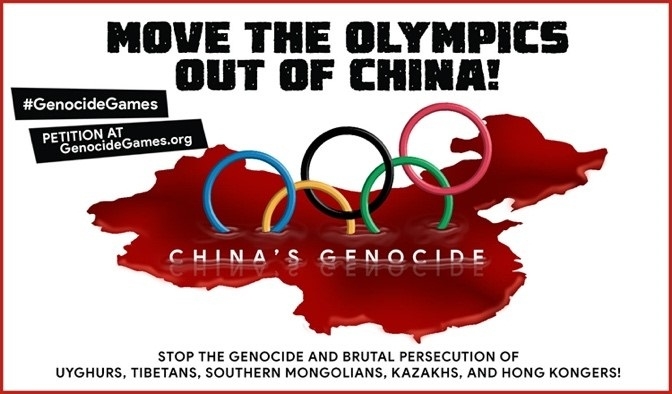 Evan Bates - an American ice dancer has been openly speaking against the Beijing Games. NBA star Enes Kanter additionally stamps his protests on his shoe. As a response, the Chinese authorities completely blacked out Enes and his team Boston Celtics from the Internet.

Chinese high-handedness towards dissidence and its record on human rights violations is legendary. The call for boycott has obviously peeved the ruling dispensation, which has termed it as violative of the ‘Olympic spirit’ and based on rumours and lies. They have strongly censured the boycott, threatening ‘resolute counter measures’ and say the nations will ‘pay a price’ for their actions and ‘political posturing’.

This is not the first time that Olympic Games have been marred by boycotts. Olympics have always provided a colossal platform to express dissension and to send a message. In 1956, eight teams boycotted the Melbourne Games for reasons such as the Suez Crisis, Soviet crushing of Hungarian revolution and presence of Taiwan. The 1976 Montreal Games were boycotted by almost 30 nations that protested IOC not banning NZ after the NZ Rugby team toured apartheid-scarred South Africa earlier that year. In 1980, then US President Carter actively lobbied support to protest the Soviet invasion of Afghanistan, leading to the boycott of over 50 nations at the Moscow Games. And in 1984, the Eastern bloc countries led by Soviet Union boycotted the Los Angeles Games - a visibly vengeful move. Meanwhile, IOC president Thomas Bach, steering clear of political landmines, insisted that IOC has always been about athletes and the Games should be respected as ‘politically neutral ground’.

The US Congressional Executive Committee on China (CECC) at a hearing regarding corporate sponsorship sometime back, had grilled US-based Olympic sponsor brands like Visa, P&G, Coca-Cola, etc., on their position on human rights and its violations by the hosts. They couldn’t manage to get “a single cross word about the Chinese Communist Party” from the brands. All the brands had similar messages: They stand for the cause of human rights, and they also support the Olympics. Sounds textbook-like! The hearing concluded with CECC gallingly accusing IOC of showing “cold indifference to genocide”.

There is big money at stake. Top brands which include Toyota, Panasonic, Samsung, Intel, etc., earn a revenue of over $100 billion from China. Brands tend to lose patronage from the establishment as well as the Chinese people if they behave in any antagonising manner. Brands like Nike, Adidas amongst others had witnessed a drop in sales after they criticised the working conditions in Xinjiang. Brands like Omega, P&G, Coca Cola must walk the tightrope harmonising the sensitivity of Chinese consumers, the ever-vigilant eyes of the Human Rights groups and consumer sensibilities globally.

French President Macaron says ‘It’s just symbolic’ and chooses to stay away from the US-led boycott; so does Russia. Countries with deep trade engagements with China are staying non-committal. India has yet to formally take a view, but going by recent indications, India is unlikely to join this half-hearted boycott camp despite the LOC stand-off. China has not allowed international spectators for the Games, citing COVID. At this stage, not a single athlete has announced a pull-out. So, for us viewers and sports enthusiasts, nothing changes.

In an intricately inter-linked world order, it is incongruous to have half-hearted measures even as the money, trade and commerce continue unabated. The continuation of the Games should not be seen by China as ‘world is looking the other way’. Misadventures on human rights need to be condemned and justice must be sought. The means just ought to be stronger and faster.

(The author is a senior professional in the corporate sector and writes on varied topics that catch his fancy. The views expressed here are his own. He tweets at @sandeepbangia)