HomeBrandsutra#HarGharTiranga is a call for action that is here to stay, says Kailash Surendranath

#HarGharTiranga is a call for action that is here to stay, says Kailash Surendranath

The campaign reflects aspects of the country’s progress such as digitisation, advances in science, foray into space, emphasis on clean energy as well as major government initiatives

“The idea of having a national flag in every home is beautiful, and the #HarGharTiranga campaign is a call for action that is here to stay. Our film has matched the importance of this campaign,” says veteran adman and film-maker Kailash Surendranath, looking back on his recently released work for the Ministry of Culture to mark the 75th anniversary of Indian Independence, being celebrated as ‘Azadi Ka Amrit Mahotsav’.

Shooting for the #HarGharTiranga campaign started in the last week of May, leaving Surendranath and his son Angadveer Surendranath with barely two months to put it together before its release scheduled on August 2, 2022, that too in the middle of a raging monsoon.

“We tried to bring in as many aspects of the country’s progress in the #HarGharTiranga film as we could – things like digitisation of the country, advances in science, foray into space, emphasis on clean energy… as well as the Government’s key initiatives such as Swachh Bharat Abhiyaan, Atmanirbhar Bharat, Beti Bachao Beti Padhao, etc.” explains Surendranath.

“From relying on the Internet at the research stage to study and find the right locations to be captured for the film as well as ease of communicating with people; from using under-water cameras while scuba diving in the Andamans to depict the tricolour in the coral reefs to using drones to shoot physically inaccessible places; from relying on weather forecasts to schedule shoots in the monsoon to quick post production edits for different platforms and colour corrections for enhanced quality - technology came to the aid of the team at Kailash Picture Company in a big way while putting together the campaign. In the process of shooting, I was also amazed to discover India anew… for instance the spectacular gorge at Gandikota in Andhra Pradesh, called the Grand Canyon of India, was beyond imagination,” adds Angadveer Surendranath.

Aarti Gupta Surendranath is the creative producer of #HarGharTiranga, co-directed by Kailash and Angadveer Surendranath. The lyrics are by Swanand Kirkire, and singers Asha Bhosle, Sonu Nigam and Rockstar DSP have lent their voice to the campaign.

1. Amitabh Bachchan and Kailash Surendranath during the shoot 4. The shoot with actor Ajay Devgn took place on the set of his film 6. Angadveer Surendranath on location in Rajasthan 10. Singer Sonu Nigam looks on as Kailash Surendranath makes a point before the team 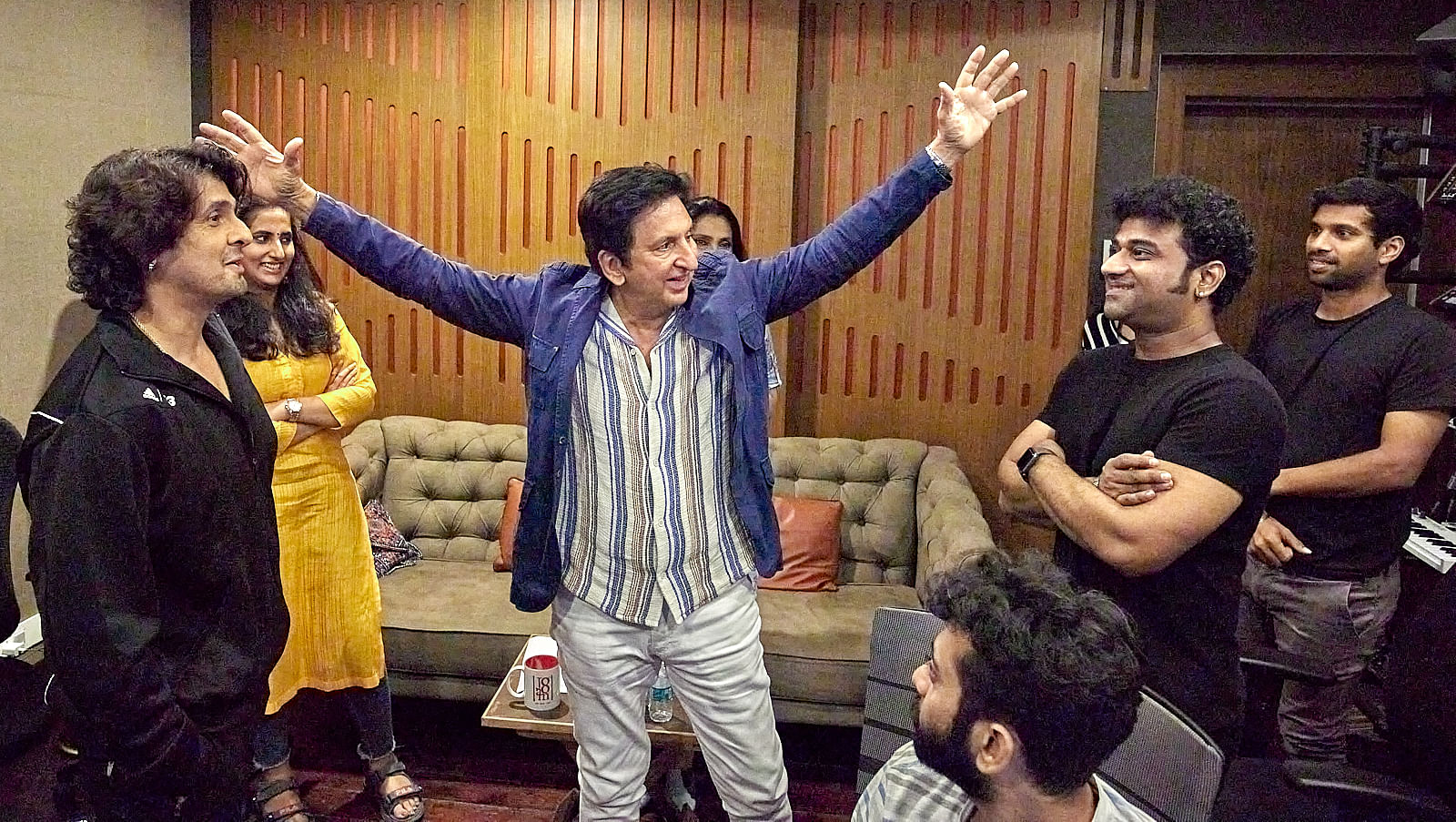 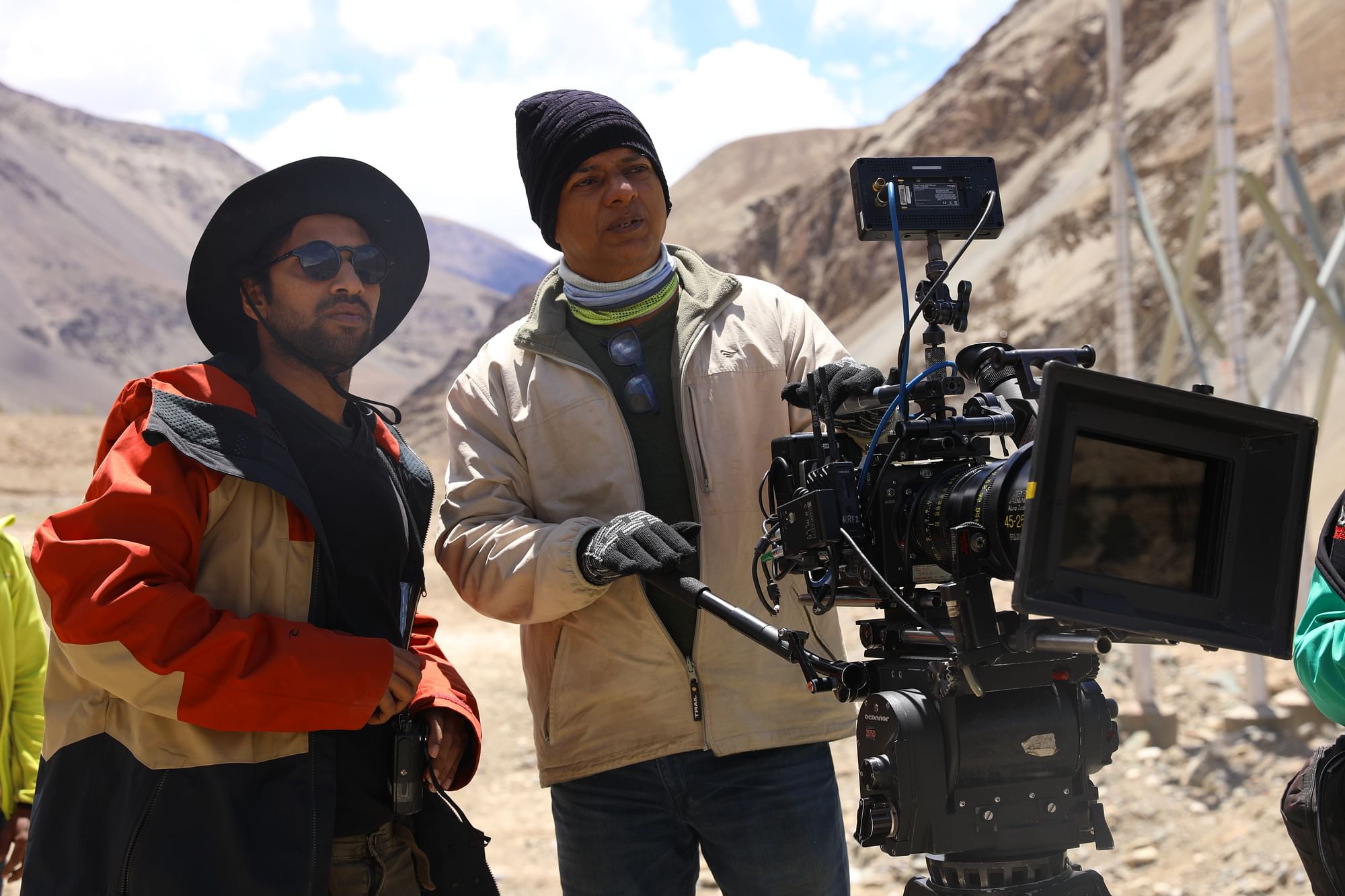