Undeniable: How Biology Confirms Our Intuition That Life Is Designed 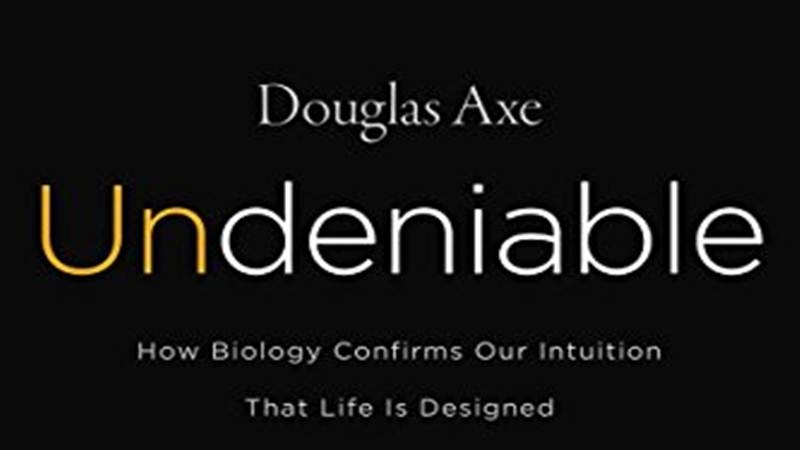 One thing is certain that Douglas Axe’s book Undeniable makes reader to think about the theory of Intelligent Design. He has put forward his arguments very cleverly, using scientific language when necessary, and assuring reader that one who thinks of ‘To what or to whom do we owe our existence?’ is a scientist in his own way. Perhaps he means to say that whoever thinks of this fundamental question has a potential to become a scientist! He assures readers that you are capable of thinking on the fundamental issue of the existence of not only human beings but all forms of the complex life that exists on the earth.

This assurance compels reader to go through the book seriously. There has been a great debate going on, for years together,  about the theory of evolution among the biologists and certain group of ‘thinkers,’ who believe in theory of either Creationism or Theory of an Intelligent Design.

It is true that Darwin’s theory does not explain the missing links in the process of evolution.  But the theory of either creationism or Intelligent Design fails to provide the scientific base needed to prove the respective theories.

Douglas Axe, in his book ‘Undeniable’, tries to provide scientific base to the theory of Intelligent Design. Though his primary formal education is in engineering, engineering in the biology attracted him and he started working on the subject with great interest. An independent thinker in his own way, Douglas Axe puts forward the theory of ID in a very lucid style.

Also Read: The Bravest of The Brave

His way of narration is very simple. He does not use high sounding bombastic words or technical jargons but tries to use very simple language and put forwards his arguments.

The book has 14 chapters. He starts with the question, to what or to whom we owe our existence and tells the readers that ‘we share the intuition that life can’t be an accident. And for all of us, understanding is what eliminates the contradiction.

Technical understanding can be overwhelming for many of us, though, so while I will offer glimpses of what I consider to be the decisive technical science, I won’t turn this into a science lecture. Instead, common science will be the thread that holds everything together.’ He gives an example of ‘oracle soup’ and gives recipe of the same.

If you follow the recipe you will get the instructions for building something new and useful, worthy of patent.’

The example helps reader to understand that life, which is very complex in nature and difficult to comprehend, cannot come in to existence with this type of recipe.

Axe is very smart in using Oracle soup as a metaphor to suggest that life cannot come in to existence by sheer accident! Axe says, the explanation by Darwin about the origin of life ‘seems too ordinary for the job.’  He goes on saying that ‘certain good things (please read, complex life on the earth and the universe) can’t just happen. They never come out of thin air. They only happen if someone makes them happen.’

This is the way Axe tries to convince readers that there has to be ID. He says, ‘I intend to show that the universal design intuition is reliable when properly used and, moreover, that it provides a solid refutation of Darwin’s explanation for life.’

A point to be noted here is though Creationism and ID are, in theory, two ‘different’ concepts, both the theories assume that there is somebody who has created not only life on the earth but the universe. Creationist  believe, it is God who has done the work and ID say it is the designer who had done it. ID hesitates to use the word God, but claims that some sort of supernatural designer was involved in the creation of life on Earth.

It differs from Creationism because it divorces Creationist ideas from their roots in Scripture. The argument in favour of Intelligent Design has two parts – Evolutionary theory doesn’t fully explain the origin and development of life on Earth. Life on Earth – and more generally the universe – shows so much order, purpose and design that there must have been a designer! Axe in this book tells the readers where to look for the answer of the questions theory of evolution raises.

While providing a map for the reader, Axe says, “Chapter two introduces the intuition that crates internal conflict in all of us by tugging against Darwin’s claims.

Chapter three and four will be a short account of the unexpected lessons Axe has learned while seeking a scientific solution to this internal conflict. In chapter five the answer is to be found not in technical science but common science. Chapter six to nine will be a journey through the important aspects of common science.

Chapter ten will look at the question of what life is through the lens of invention. Chapter eleven and twelve discuss ‘whether scientific community’s defence of evolution looks more like a “science thing” or a “cultural thing.”

And in chapters thirteen and fourteen ‘examines nature of life and humanity more deeply.” Axe, while concluding his ‘common science’ lecture says, ‘Somethings, of course, can only be seen by standing on the shoulders of giants, but the most crucial things have always been seen best by standing on the ground.’ And he has done it so well that ‘Undeniable’ is a must read for every curious mind. The photographs, graphics, quotes and illustrations have added great value to the intelligent design of the book.