The Death and Afterlife of Mahatma Gandhi

“The Death & Afterlife of Mahatma Gandhi,” a book by critic, novelist and public intellectual Makarand R Paranjape is a highly gripping endeavour at understanding not only the message of the father of the nation but also the idea of India by inquiring into the meaning of his death. For most people born in post independent India and the majority of the population which is under forty it can get them thinking in trying to understand Mohandas Karamchand Gandhi beyond his death, viewed both as murder and martrydom.

Gandhi was not a passive victim but an active participant. He resisted tighter security at the imposing Birla House with its sprawling lawns in the national capital. This even though he escaped an attempt on his life on January 20, 1948 barely eleven days before his assassination. He literally ensured anyone wanting to kill him had easy access to him as he had opposed body checking of all those who came to his daily prayer meeting at five in the evening.

Despite strong protests from the audience the Mahatma insisted on the recitation of verses from the Koran during his multi-religious prayer meetings where slogans like “Death to Gandhi” rent the air by irate refugees from West Punjab, now Pakistan. As elsewhere in the country which witnessed communal clashes, he fasted to restore communal harmony in Delhi as well.

Against all calculations of strategic leverage by the invading Pakistani backed mercenaries, he insisted with the government of India and succeeded in repatriating Rs 55 crores of Pakistan’s share of national assets after the trauma of partition. What is more he refused to accept that India and Pakistan were two nations or that a nation could be founded on the basis of religion alone. In the days leading up to his assassination, Gandhi repeatedly declared that he would rather die than countenance the destruction of the sacred freedom that so many had sacrificed so much for.

In that sense Gandhiji’s self willed martyrdom was as an offering, as he himself put it, a last and desperate yagna – sacrifice, oblation, sacred rite – to save India. He himself bore testimony to his faith in ahimsa or non-retaliatory love, refusing to succumb to the cycle assuring mutual destruction in reactive communal massacres.

The Mahatma’s martyrdom, Paranjape maintains was a “mighty and potent act of love jihad – he died to stop hatred and bloodshed; he gave us life so that we will stop taking each others.” The author has sought to look into the fuller ramifications of Gandhiji’s death rather than the mere 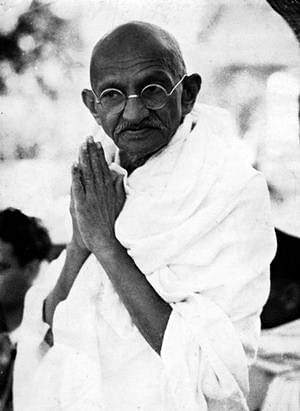 details and circumstances of his murder like: What did Gandhi die for; what moreover is the significance of his death; why is it so critical to understand it. Simultaneously, what is the largest concern with the meaning of Gandhi’s death and its pscho-political implications for India and its people.

It is widely known that Nathuram Godse, a misguided Hindu activist, killed the Mahatma. It was also fairly obvious that a large number of people were involved and several other conspirators were charged and tried. The voluminous trial reports reveal that there were many others involved in the conspiracy that never stood trial.

There is also the tragic bungling that cost the country its Mahatma. Very little was done to beef up Gandhi’s security and the complicity of the entire Congress party cannot be denied. No doubt Gandhi’s idea of Hinduism was quite different from that of the Rashtriya Sewak Sangh or the Hindu Mahasabha. He advanced his own definition by saying “I would suggest that a Hindu was one who had equal respect for all religions.”

After all Gandhi’s last will and testament, written the night before his assassination, called for the dissolution of Congress as a political organisation. Gandhi’s assassins were Hindu nationalists who thought that that he was the greatest obstacle to their goal of bringing about a Hindu Rastra or Hindu nation. These zealots hated what Gandhi stood for.

They considered him the enemy of Hindu interests holding him responsible for the partition which to them was an outcome of Gandhi favouring Muslims over Hindus. The continuing of Godse by Hindu communalists remains puzzling if not distressing. The cult of Godse survives, even flourishes, thanks to the efforts of his brother Gopal Godse and the numerous Hindu nationalists who support the “Godse thesis” against Gandhi.

If the killing of Gandhi was not ordinary, so too the killer Nathuram Godse, a brahmin from Pune was no ordinary killer. He used Gandhi’s favourite scripture – the Bhagwad Gita – to justify his action. Suspended in the manicured laws of Birla House was a question of gigantic proportions, one that had the potential not just to destabilise the modern Hindu psyche but the nation itself.

To understand Gandhi’s afterlife, what he really meant to India and Indians was no less than to understand all the ramifications of that question. It is crucial to see the link between partition and the assassination of Gandhi so explicitly clarified by Nathuram himself. Examining the findings of the Kapur Commission it is evident that there were at least three groups of overlapping Hindu nationalists who hated Gandhi: (1) Sections of the RSS and Hindu Mahasabha who were also anti-Congress, anti-Muslim and anti-partition did not have the mass support of the people; (2) Some princes including Gwalior and Alwar were sympathetic to these elements and a Hindu Rashtra; (3) G V Ketkar, Lokmanya Tilak’s grandson and editor of Kesari newspaper of Poona were also in favour of more militant Hindu activism and regarded Gandhism-cum-false nationalism as their enemy number one.

In assassinating the father of the nation, Nathuram Godse had done what no Hindu dared to before him. His action almost caused an unbridgeable rupture between India’s past and it’s present. In the Mahatma’s death two stalwarts of the Congress party and most powerful members of the cabinet – Prime Minister Jawaharlal Nehru and Sardar Patel – were united. During the funeral procession and ceremonies both were seen together and were indeed in spirit as well.

Patel sat with the body in the gun carriage and Nehru led the procession and sat in the carriage by turns. Perhaps it is gyrocentric civilisation such as ours which will have the strength and courage to confront and overcome the shame of our patricidal act in slaying the Father of the Nation and turn it into a moment of continuous self examination and transformation. What indeed killed the Mahatma was the partition of the country.

Gandhiji believed that the basis of co-existence must be equality, mutual respect and the recognition of the dignity of all – in a word the principle of ahimsa, non-injury, or to put it even more radically, love. However, it is certain that partition ideologies produce horrors and destroys not just states but societies.

This has been shown not only in India but in Pakistan, Sri Lanka, Nepal and Bangladesh. Violence breeds violence; it does not end violence. Just as the Mahatma did not live in vain, the MaThe Death and Afterlife of Mahatma GandhiThe Death and Afterlife of Mahatma Gandhi. Mhatma did not die in vain either. This is attested to not only by his life but much more so by his death and afterlife, notes the author.