I am a troll: Inside the secret world of the BJP’s digital army- Review 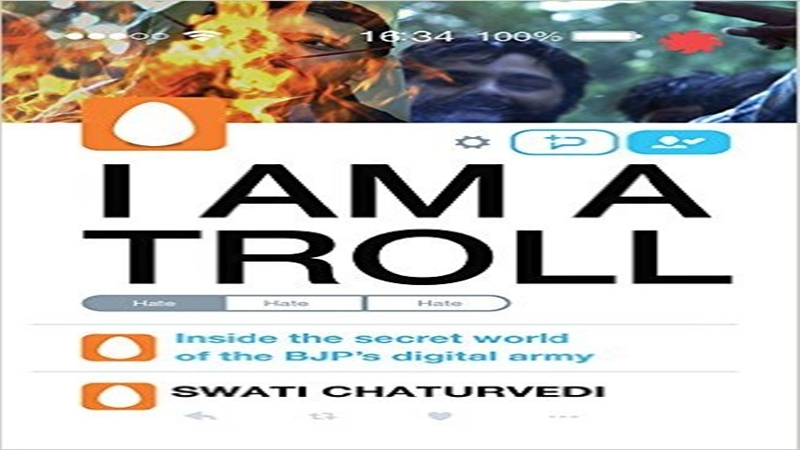 Title: I Am A Troll: Inside the secret world of the BJP’s digital army

When your question is bigger than your answer

When you are a bad writer, but a good chatter

If your fingers are itching with nothing better

If your biography is less than 140 character

In its earliest avatar, Internet was all about communication and information, with email providers and search engines ruling the roost. From there on, it moved into business, dawning the era of e-commerce. In its current phase, social networking is the buzzword. But while on the surface the term evokes images of societal good and shared happiness, there is lot of hate out there. That’s the essence of Swati Chaturvedi’s book in which she argues that BJP’s digital army generates online hatred (trolls) for anyone perceived to be critical of Prime Minister Narendra Modi and the government. “… online trolls usually have Hindu right-wing views and highly nationalist. They tend to attack anyone who appears to be against the government, the Bharatiya Janata Party (BJP) or the nation,” Chaturvedi says in introduction.

The rather-slim volume comprises five small chapters, one of which deals entirely with Sadhavi Khosla, who worked actively for two years with the BJP’s social media cell, a claim denied by BJP later. Khosla details orchestrated attacks on people including journalists like

Barkha Dutt and Rajdeep Sardesai. However, the one which obtained the most public attention and was well-reported by the print media and television channels alike was the threat of boycotting e-commerce site Snapdeal, if it did not fire its brand ambassador Aamir Khan who had been ridiculed by the right-wing nationalists for his remarks on growing intolerance in the country. “The poisonous campaign launched by the BJP’s social media team proved Aamir’s point on intolerance,” assers Khosla.

Apart from Khosla, the author informs that she met “over thirty young men and women who worked in the BJP social media cell and they spoke to me on condition of anonymity.” The author devotes another chapter chronicling the interviews with three of them, giving readers a peak into day-to-day functioning and sheds light on some of their social media campaigns. Though much of the content in the book is well-known, what’s new is the sheer scale at which operates.

All is not dark and dirty. To be fair, Chaturvedi acknowledges the positive usage by some members of the Cabinet including External Affairs Minister Sushma Swaraj, Women and Child Development Minister Maneka Gandhi and Railways Minister Suresh Prabhu who have put social media to innovative and effective real-time initiatives.

More interestingly, she also informs us as to how BJP was the first Indian political party to understand the power of social media and the Internet, having set up party website way back in 1995. Prime Minister Modi set up his personal website in 2005 and joined Twitter in 2009. In contrast, Indian National Congress built its site in 2005 whereas Rahul Gandhi joined Twitter only in 2015. No wonder, BJP has had a clear cyber advantage over Congress!

However, where the author loses out is largely is the single-source narrative of Sadhavi Khosla and three faceless foot soldiers of the digital army. The book also seems to have been written in haste and reads more like a piece of long-journalism than a well-researched and keenly-argued tome on a subject of contemporary importance. Nonetheless, it is indeed brave for Chaturvedi to unveil some of these issues which are indeed scary and chilling to read. One only hopes that all this hatred, intolerance and bigotry don’t spill over in the real world.