Before we visit the Goddess by Chitra Banerjee Divakaruni 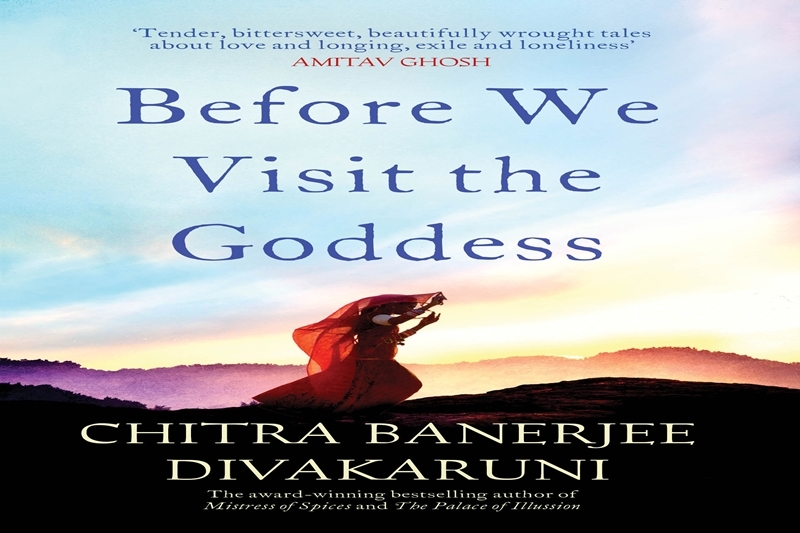 Women, Womanhood and Feminity as a discourse has attracted various takers. In her book titled “The Second Sex” Simone de Beauvoir had famously stated, that ‘one is not born, but rather becomes, a woman.’ As the pages of “Before we visit the Goddess” unfold one sees three generations of women attain their womanhood. Sabitri, Bela and Tara live their distinct lives in different continents, different circumstances, and through different turmoils. Yet one can’t help but notice an invisible thread that links these women together.

The book opens with a fortunate lamp : Sabitri, a woman now old, receives a phone call from her estranged daughter Bela, her desperation, her cries and her sorrow affect Sabitri deeply. Bela’s situation has risen because Tara, her daughter, has decided not to pursue her education further. Bela asks her mother, in her most difficult time to speak to Tara and convince her not to take this impulsive decision.

As we travel further we turn to Bela, Sabitri’s daughter, who had eloped with her lover Sanjay at a young age. Sanjay’s ‘left oriented’ politics had made him many enemies in Kolkata and he had but two options, either hide in India and get shot or escape to America and live. Sabitri’s disapproval of Sanjay, his sudden disappearance and magical emergence makes Bela leave everything in search of true love. But this fantastic romance doesn’t lead to a ‘happily ever after.’

And finally we meet Tara, an American by birth and an Indian by origin, who is Bela’s daughter; she lives with her masseuse boyfriend, works at ‘Nearly New Necessities’ and has an ordinary life. It has been a while since she spoke to her parents. Tara, apart from being impulsive, like her mother, has a problem of stealing things that matter to other people; does she sell them after stealing them? NO! She throws them away.

The chapters of this book treat time very differently. At various points in the book one gets the feeling of going through a wormhole of time, a voyage between generations with these women. Sometimes this voyage does get jarring owing to the sudden shifts.

The book also tells their stories from various points of view. A myriad number of characters appear in the book and their eyes are the ones that witness these women. Be it Bipin Bihari Ghatak (Sabitri’s most dependable employee), Kenneth (Bela’s neighbour), Mrs Mehta (The old aunty who Tara has to babysit), Or Dr V (A geeky, bald old man who Tara has to drive around in America) each has an endearing presence.

The challenge that this book faces is that it has many plot points which aren’t fleshed out completely. The characters undergo a lot but what they undergo is simply told to us. There is a lack of dialogue between the characters and hence their lives don’t seem vivid enough to consume the reader. There are moments in the book that are special especially the one when Tara Visits the Goddess. The chapters which start off being staccato eventually find ground in the end.

The other challenge this book faces is that various characters who are introduced in the many important points go missing until they are just mentioned in passing right at the end. One feels the need to know more about these characters, because they too are undergoing a crisis which is of equal complexity as compared to the Women in the story. Some parts of the book, like the one in which Bela in her youth encounters a magician, should have been particularly dealt with, with more detail and treated more completely for its presence to be justified. For now it just seems disjointed to the story and adds no value whatsoever.

Also Read: The Gospel of Yudas by K R Meera

As the book comes to a close, I try to meditate over the various challenges these women face. Their identity, their fierce independence and their vulnerability come forth as major themes of the book. What Chitra Banerjee Divakaruni achieves successfully is that she shows the journey of womanhood in a brief, definitive fashion. She also doesn’t glorify her women, the women in her tale are strong, yet flawed, are decisive yet impulsive, and in the treatment of these women the author triumphs. The author also treats masculinity well. She doesn’t paint the masculine in a homogenous colour. In fact the men in this book go through their own crisis, their weaknesses are poignant.

The final stop of the book completes the circle of time. Despite its flaws this book is worth a read, because it treats the passage from girlhood to womanhood with great care.