Six new members have been nominated to the Trust replacing the former ones.
Staff Reporter 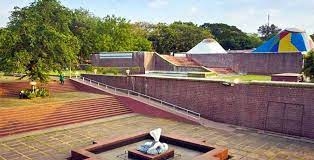 BHOPAL (Madhya Pradesh): The state government has reconstituted the Bharat Bhavan Trust. Six new members have been nominated to the Trust replacing the former ones. They include Padmashree Padma Subramaniam, a danuese from Chennai, film personality Manoj Joshi from Mumbai, Pt. Vishwamohan Bhatt of Jaipur, Bhil painter Bhuribai from Bhopal, painter CS Krishta Shetty from Bengaluru and journalist Vijay Manohar Tiwari from Bhopal. Despite being reopened to public 4 months ago, not a single cultural event held at Bharat Bhawan in...