Bhopal: 'Neither Puran nor Quran asks people to fight' 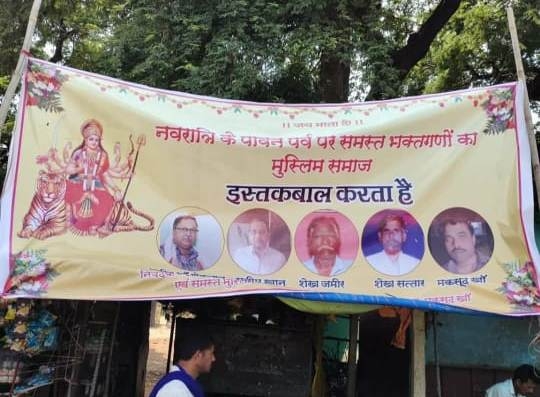 Bhopal (Madhya Pradesh): Navratri is a busy time for Sheikh Jamir, 72, a farmer. He has been living in Hirankheda village of Seoni-Malwa block in Hoshangabad district since his birth.

A couple of days before the festival, Jamir along with Hindus and Muslims of the village selects the place where the Durga idols would be installed. Then, he accompanies others to Hoshangabad to buy idols. The Hindus and the Muslims jointly make arrangements for tent, lighting, power connection etc. And he also makes monetary contributions too.

A village of 3,800 residents, Hirankheda has 30 Muslim homes. And it is a living example of how religion is no barrier to community living. Jamir says that he can't say for how long Muslims have been joining the Navratri celebrations in the village. "We have inherited this tradition from our forefathers," he says.

Jamir along with other Muslims of the village, also makes arrangements for Bhandara on the last day of the festival. "On that day, food is not cooked in our homes. We all eat at the Bhandara," he says. Likewise, on Eid, Hindu neighbours are permanent guests at Jamir's place. When asked how Hirankheda is still setting an example of communal harmony in these times of sectarian conflicts, Jamir blames politicians and 'petty-minded people' for dividing the two communities.

"Just tell me, will you be able to distinguish between my blood and that of a Hindu?" he asks. "Neither Purans nor Quran ask their people to fight with others," he adds.

Ajay Narayan Gaur, who is a priest at village temple says that both the communities have been celebrating Durga Utsav together for the past at least 100 years.

"Our village has no history of communal tension, let alone violence," Gaur says. Jamir, who sat through the Bhajan concert of Shahnaaz Akhtar, organised as part of the Durga Utsav celebrations in the village on Saturday night, is very happy at the turnout. More than 15,000 people turned up," he gushes.