The Congress claimed BJP leaders were only engaged in seeking applause from their party workers by making such statements, despite "3.28 lakh deaths from January to May this year" in the state, which the opposition party said was much higher than the normal fatality rate in the state.
PTI 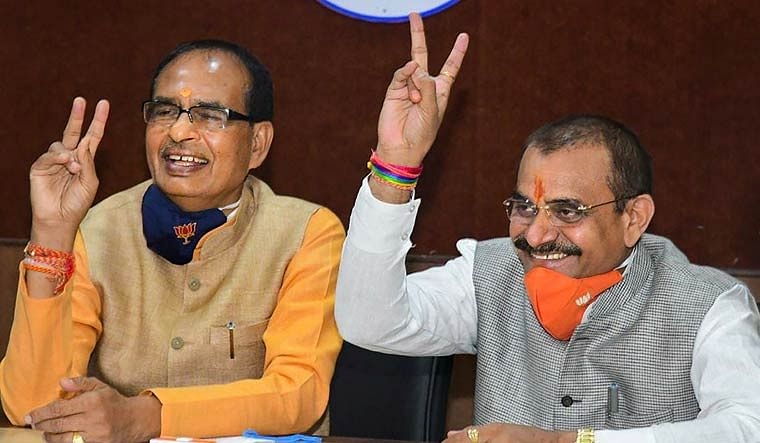 Currently, Shivraj Singh Chouhan is the chief minister of Madhya Pradesh, while Vishnu Dutt Sharma is the state BJP president.

The Congress claimed BJP leaders were only engaged in seeking applause from their party workers by making such statements, despite "3.28 lakh deaths from January to May this year" in the state, which the opposition party said was much higher than the normal fatality rate in the state.

In a tweet on Sunday, Chugh said, "How can corona harm Madhya Pradesh where state president is Vishnu and Chief Minister is Shiv." He was at the state BJP office here to participate in the launch of the Rashtriya Swasthya Swayamsevak Abhiyan, a programme to provide health care training to BJP workers so that they can volunteer during the pandemic and other health-related crisis.

Chugh also said that 135 crore doses of COVID-19 vaccines will reach health centres in the country by December this year.

Meanwhile, state Congress spokesman Bhupendra Gupta hit out at the BJP, saying its leaders speak like this only to seek applause from their party workers.

Gupta claimed "3.28 lakh people died in Madhya Pradesh between January and May this year, which was 54 per cent higher than the normal death rate".

He further claimed that the BJP state president himself admitted that 3,500 people from the families belonging to BJP workers and leaders had died due to COVID-19.

"Chugh should have told us where Shivraj and Vishnu Dutt were when COVID-19 was wreaking havoc? Were they sleeping? How will they curb the pandemic in future?" Gupta asked.

On equating the two leaders with the Hindu Gods, he said, "Such dictatorial forces in the entire world consider themselves as supreme powers. Such forces believe they are God." However, state BJP secretary Rajneesh Agrawal said this was just a way of speaking.

"He (Chugh) only mentioned the first names of the CM and the BJP state president," Agrawal pointed out.

He said the BJP government and the party organisation were engaged in serving the people during the pandemic.

"The pandemic spread across the world. It was important how the state government dealt with it and the party organisation served the people in the time of crisis. Now, the pandemic is under control," he said.

The Congress only spread chaos during the pandemic crisis, Agrawal alleged.

On Sunday, Madhya Pradesh reported 10 COVID-19 cases, taking the tally of infections to 7,91,960, while the death toll remained unchanged at 10,514, as per the state health department.

The number of recoveries in the state stood at 7,81,298, leaving the state with 148 active cases, as per official figures.