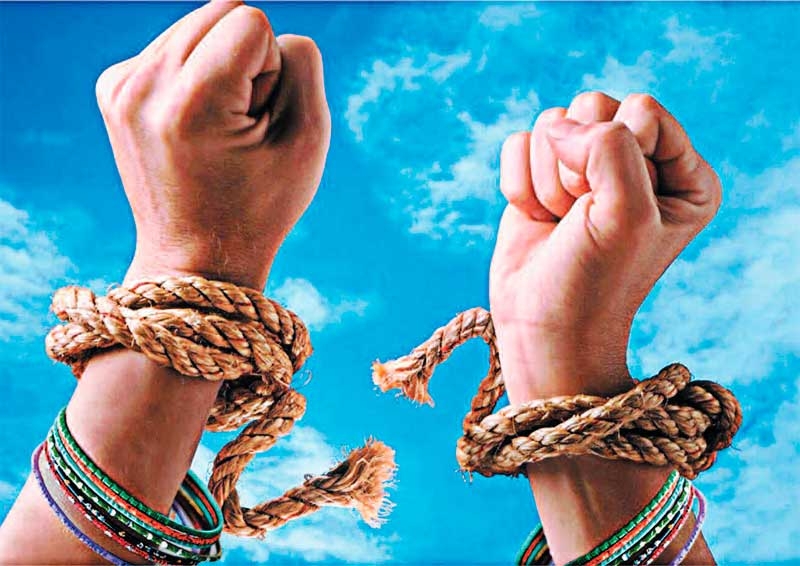 Loktantrik Janata Dal (LJD) leader Sharad Yadav stoked a major controversy by body-shaming Vasundhara Raje saying she needs rest and is growing fat. “And this Vasundhara, give her rest, she has become very tired… has become very fat… earlier she was thin… she is a daughter of Madhya Pradesh. Ask her to rest,” said Yadav, who is hardly Adonis himself, but that’s not the point.

He said it aloud, and added to the nasty sexist comments that we constantly hear about women in power, whether they are politicians or corporate heads; for movie stars, models and sportspersons, it’s always open season on barbs as though by being attractive and famous, they have offended chauvinists who believe women should not step out of their homes.

This is just as bad as calling Indira Gandhi the “only man in the cabinet,” the implication being that women are not supposed to have power, and if they do, they can wield it only like men, because there seems to be no definition of female power. Today the term “woman power” is used as a catchall to describe one woman or a group protesting against injustice or winning a hard-fought battle, which they ought not to have fought anyway if gender parity was a given.

In her new book, Women & Power: A Manifesto (adapted from two of her lectures at the British Museum), Mary Beard, a feminist and professor of the classics, goes back to ancient Greek and Roman mythology as well as the art inspired by it, to trace the roots of misogyny and to show how the west has always silenced women’s voices. She cites an instance from Homer’s Odyssey, when Telemachus, sends his mother Penelope, who has come downstairs for a purpose as innocuous as asking the music being played by the bards to be changed, to her room with the words,

“Mother, go back up into your quarters, and take up your own work, the loom and the distaff…speech will be the business of men, all men, and of me most of all; for mine is the power in the household.” Beard points out how In Ovid’s Metamorphosis, Io is turned by Jupiter into a cow, so she can only moo, and Echo’s voice reduced to a mere instrument for repeating the words of others; when the young princess Philomela is raped, her tongue is cut out, to prevent her denouncing her attacker (she still communicates by weaving the story of her trauma into a tapestry).

Greek and Roman mythology mostly portray women as victims, and those who are not easily silenced — like Medea, Clytemnestra and Medusa—have to be punished, killed, or ridiculed for trying to be male. A woman called Maesia who defended herself in court was described thus, “because she really had a man’s nature behind the appearance of a woman she was called the androgyne.” Another boldly articulate woman, Afrania’s speech was called “yapping” or “barking” and her death in 48 BC is actually noted because, “with unnatural freaks like this, it’s more important to record when they died, than when they were born.”

On rare occasions when women were allowed to speak in public and be heard, they had to be compared to men. Beard gives another example of Queen Elizabeth I addressing her troops at Tilbury in 1588, when they were fighting the Spanish Armada. She said, “I know I have the body of a weak, feeble woman; but I have the heart and stomach of a king, and of a king of England too.”

Silencing women’s voices is a way of disempowering them. If a woman cannot express her ideas in a public forum, how can she bring about any change? Even today when a woman speaks out strongly, she is called “strident”. If she speaks of women’s problems, she is said to be “whining”. Such words are never used for male speech. Margaret Thatcher famously took voice lessons to pitch her voice lower; so that she could sound more like a man.

World over, the representation of women in politics and business is minimal. And when women do make it to a position of power, terms like “knocking the door, “storming the citadel” or “smashing the glass ceiling” are used, as if, writes Beard, “Women in power are seen as breaking down barriers, or alternatively as taking something to which they are not quite entitled.”

She quotes a headline in The Times in 2017, over an article on the possibility that women might soon gain the positions of Metropolitan Police Commissioner, chair of the BBC Unitary Board and bishop of London as “Women Prepare for a Power Grab in Church, Police and BBC.” So if women rise in their chosen fields, they are seen to be “grabbing”, which implies that they do not deserve it but have somehow acquired power by devious means.

The vicious battering Hillary Clinton received during the US Presidential Elections, is distilled into an image of Donald Trump as Perseus holding up the head of Hillary as Medusa, that he has chopped off. When women do make it to a leadership position, they choose to, or are forced to, take up issues that concern women, like domestic violence, equal pay, child-care or sexual abuse, while men can talk about ‘important’ issues like economics or controlling terrorism!

Beard draws that line right up to the current tendency of men trolling women on social media using vile sexual threats and the #MeToo movement that finally gave women some way of speaking out. Which, of course, necessitates the constant redefining and recalibrating the very idea of power, what it is, what it is to be used for. If powerful women talk or behave just like powerful men, then no real purpose is served.

—Deepa Gahlot is a Mumbai based columnist, critic and author.