Juxtapose CJI N V Ramana’s exhortation with that of his predecessor, Justice Sharad Arvind Bobde, who said chief justices of some of the 25 high courts in India told him that women advocates refuse judgeship because they prefer to sacrifice their careers for their children. The Justice Bobde stereotype stands demolished by the three new women judges of the Supreme Court
Olav Albuquerque 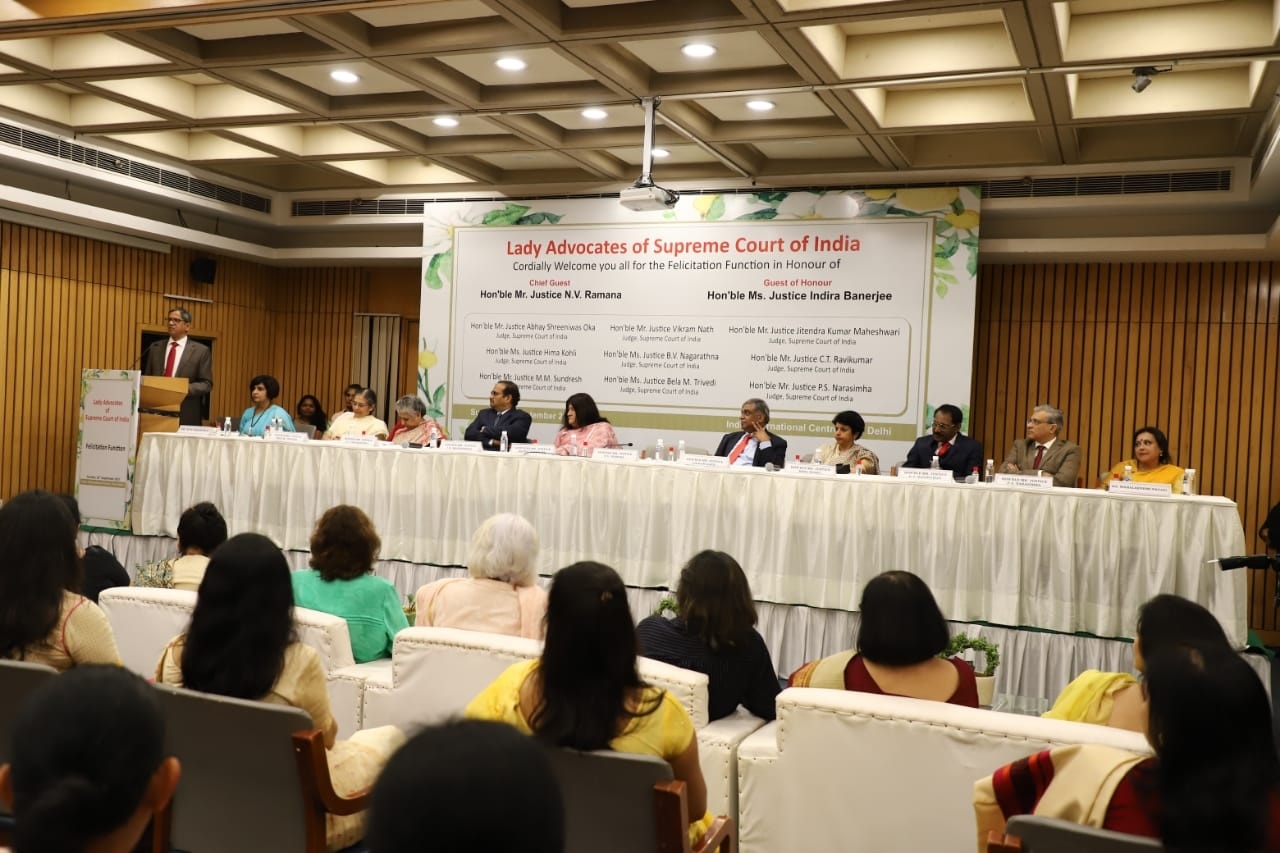 Being a woman judge is stupendously difficult because they have to deal with male chauvinism, which is why the 48th CJI N V Ramana got a standing ovation from the women advocates of the Supreme Court when he exhorted them to stand up and shout with anger to demand 50 per cent reservation for women in the judiciary.

This was imperative to correct the gender imbalance in the judiciary, a male-dominated bastion, with thousands of courts lacking facilities for women and litigants preferring male lawyers, perceiving them to be free from family commitments.

“…With anger you have to shout, demand that you need 50 per cent reservation. It’s not a small issue. It’s (an) issue of thousands of years of suppression. You are entitled (sic). It’s a matter of right. Nobody is going to give charity,” the CJI declared after Justice Nagarathna told the women advocates it was CJI Ramana who had brought her to the Supreme Court.

Juxtapose CJI Ramana’s exhortation with that of his predecessor, Justice Sharad Arvind Bobde, who said chief justices of some of the 25 high courts in India told him that women advocates refuse judgeship because they prefer to sacrifice their careers for their children. The present CJI’s opinions are diametrically opposite to that of his predecessor. The Justice Bobde stereotype stands demolished by the three new women judges of the Supreme Court.

Justices Hima Kohli and Bela Trivedi have chosen law as their spouses rather than men with inferior intellects. Even the first woman chief justice of the Delhi high court, Justice Gorla Rohini, chose law rather than a man with an inferior intellect. She was a no-nonsense judge who now heads a government commission investigating categories of Other Backward Classes in India.

Justice Bangalore V Nagarathna, who is slated to be the 54th CJI in 2027, has proved to be more formidable than her male counterparts after she and Justice Gopala Gowda were gheraoed in the Karnataka high court by rowdy advocates on November 9, 2009, who cut off the electricity to the court room. Last year, while hearing a joint divorce petition while on a division bench with Justice Natraj Rangaswamy, she remarked, “Ours is a patriarchal society which still does not know how to treat empowered women.”

The point here is these empowered women judges may not succeed in stymieing the growth of patriarchal values because they will initially comprise benches with senior male judges. As these women judges attain seniority, they will head their own benches and due to various permutations linked to change of assignments, there will inevitably be an all-women bench, comprising a combination of Justices Nagarathna with either Justice Kohli or Trivedi or just the latter two. Justice Trivedi served in the very same Ahmedabad city civil court with her father, who happened to be a judge there.

Before demitting office, former CJI Bobde’s asking a government employee accused of rape if he was willing to marry his victim evoked the ire of women advocates, who demanded his resignation. The judge clarified he was free to seek clarifications from the accused under the Criminal Procedure Code, to ascertain his mindset.

This is why CJI Ramana’s exhortation to ensure 50 per cent vacancies in the judiciary are filled with women makes sense because a survey done in 2018 rated India as the most dangerous country for women. The National Crime Records Bureau Report revealed 32,032 rapes took place in 2019 which breaks down to 88 rapes every day. Nearly 400,000 crimes against women were reported in 2019, with rapes having risen by 88 per cent over the last decade.

Ironically, the landmark Vishaka judgment which laid down guidelines to prevent sexual harassment at the workplace only had Justice Sujata Manohar as the sole woman judge on the bench. Like Justice Nagarathna, she came from an elite background, with her father Kantilal Thakoredas Desai becoming the second chief justice of the Gujarat high court. She studied at Oxford and passed the tough bar exam there before she began practice in the Bombay high court in 1958.

Justice Manohar was a stark contrast from the first woman Supreme Court judge, Justice Fathima Beevi, was definitely not from an elite background but topped the bar exam in 1950; she resigned as Governor of Tamil Nadu in 2001 after the Centre decided to recall her for not having furnished a neutral report of what led to the arrest of the former Tamil Nadu Chief Minister, M Karunanidhi, and the two Union Ministers, Murasoli Maran and T R Baalu. While overturning Fathima Beevi’s administering the oath of office to Jayalalithaa, the Supreme Court said she could not act contrary to the Constitution.

This is why while CJI Ramana’s rooting for 50 per cent reservation for women in the judiciary has evoked applause; reservations without merit alone may result in diluting the quality of justice being rendered. The best example is that of Justice Gyan Sudha Misra, who declared her two daughters under the liability column while declaring her assets. She declared she had “two daughters to be married”, prompting a national newspaper to publish a news report on this gaffe.

Justice Misra was notoriously late for every hearing in the Supreme Court so that senior advocates were allegedly made to wait interminably for her to enter court. Even on her felicitation after demitting office, she arrived late so that the then CJI R M Lodha had to explain that the judge had an ailing husband to look after which was why she was perennially late. The Modi government returned her file when CJI H L Dattu recommended her as head of the Smuggling Activities and Foreign Exchange Manipulators Act (SAFEMA) appellate tribunal.

The government stated Justice Misra’s elevation as a judge of the Supreme Court was an example of bad selection by the collegium because even as a high court judge, she was in the habit of coming late to court. A habit which she did not discard even after being elevated to the Supreme Court.