The finance minister may have made major announcements to boost agriculture. But in BJP ruled Maharashtra, agriculture remains one of the most exploited sectors. Some of these measures could grievously hurt the ruling party’s votebanks. The state itself could stumble badly.

First the caveats. Make no mistake: Maharashtra is still formidable. It is the third largest state in terms of land mass in India (Rajasthan and Madhya Pradesh are larger). It is the biggest in the country in terms of GDP.

It is the most industrialised state. Its Economic Survey 2015 talks about how it remains the highest contributor to the nation’s industrial GDP and its port traffic.

Second, as a recent report from CARE points out, the state is already trying to achieve some ambitious goals. It has commenced 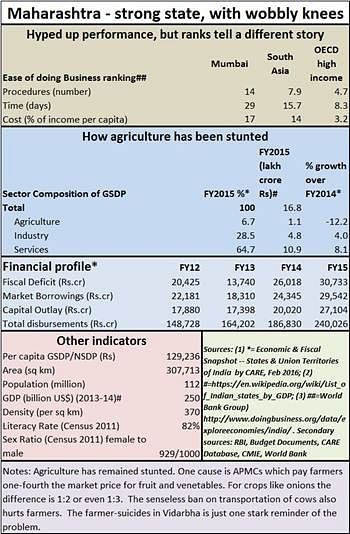 with geographic information system (GIS) mapping of land banks, which will allow it to monitor subsidies to agriculture more carefully. It will also allow land titles to be recorded centrally, rendering more difficult any tinkering with land records by local bureaucrats and legislators. It has streamlined procedures and timelines for obtaining various infrastructure connections – for electricity, railways and even roadways. It has also introduced e-governance initiatives in its law and judiciary departments and created specialised courts for handling commercial disputes.

But there are some extremely worrying indicators. First, the State has been growing at just barely 7.5%.  Compare this against 13% for Andhra Pradesh, 18% for Karnataka, 15% for Tamil Nadu and 15.5% for Gujarat. Clearly, Maharashtra is slipping.

Then look at the ease of doing business in Maharashtra (see chart). The numbers are not very flattering. Whether it is real estate approvals, the Shops and Establishment or the Food & Drugs Administration (FDA), the stench of corruption is always around.

But agriculture could be the worst casualty. The State has constantly been shortchanging its farmers. The price agricultural producers get for fruits and vegetables from the politician-controlled APMCs (Agricultural Produce Market Committee) is meagre. The producer gets only one-fourth, even one-fifth, of the market price.

For non-perishable products like onions the city retail price can be double or triple the price the farmer gets.

What is galling is that APMC’s earnings are not reflected as the state government’s earnings.  They are not subject to CAG audits.  These are funds that politically well-connected members of the committee can use the way they please. And this figure runs into several thousand crore rupees each year.

Another good indicator is the price that the farmer gets for milk produced at his farms.Unlike Gujarat, Maharashtra has been slow in forming new milk cooperatives which could protect the price the farmer gets. Instead, middlemen pick up milk from farmers at Rs.16-20 a litre. Even the existing milk cooperatives in Maharashtra exploit the farmer. As against a price of Rs.28-30/litre that Gujarat’s cooperatives pay out for milk, Maharashtra’s cooperatives pay out only around Rs.26. Gujarat’s cooperatives pay farmers the price for milk every day – often directly into their bank accounts.  In Maharashtra, payout is often once in 10 days – at best once a week.  The milk industry in this state is being hurt in other ways as well. The state’s own milk brand Aarey has been allowed to languish. And most legislators and developers have begun eyeing the landbanks and properties that Aarey owns.

Agricultural production thus remains stunted, because agricultural earnings remain low. That could also explain why agriculture accounts for just 7% of Maharashtra’s GSDP (gross state domestic produce) compared to the national figure of 17%. What is worse is that w