Will fossil fuels see a decline in coming decade?

In October last year, Dharmendra Pradhan, Union minister of Petroleum and Natural Gas (MoPNG); Minister of Skill Development and Entrepreneurship made an announcement that made some energy analysts sit up. He said that India’s oil exploration and production sector will see investments worth $40 billion over the next four to five years.

Such a statement would have made sense ten years ago. Even five years ago, it would have been acceptable. But today? It seemed misplaced because all indicators appear to point to a reduced role for oil and gas.

Take the government’s own announcements first. Piyush Goyal, Union minister for Railways, has already announced plans of turning all diesel and (coal based) steam engine trains into new generation engines running on electricity. This means less consumption of diesel and coal.

Meanwhile, Nitin Gadkari, Union Minister for Road Transport & Highways, Shipping and Water Resources, River Development & Ganga Rejuvenation has already announced his vision of converting all vehicles to electric vehicles by 2025. Even if this deadline were to be extended to 2030, it is clear that the demand for oil will diminish. In fact, with low demand offtake from India and China, it is quite possible that even if India had to import oil, global prices will be cheaper than those of India given current project costs. 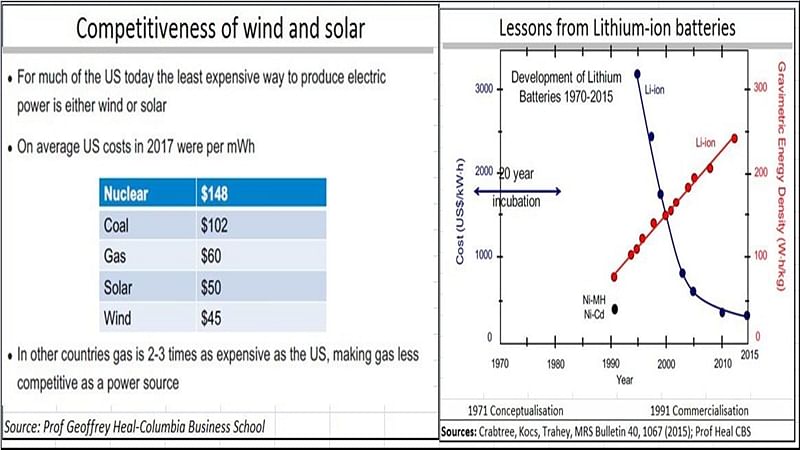 Hence, it stands to reason that the MoPNG should pay heed to some equally crucial news coming his way. At a recent conference, two professors from Columbia Business School (CBS) – Professors Patrick Bolton and Geoffrey Heal – put up a very convincing case for focusing on renewables rather than nuclear, coal or even oil.

Not that oil will not be required any more. Oil will still be in demand – especially for the aviation sector and for petrochemicals like plastics and specialty chemicals. But its biggest market – automobiles and railways – might see a sharp decline in the coming years. It is quite possible that India may not require any further imports of oil 15 years from now.

Just look at some of the numbers (see chart). Already, solar and wind are cheaper than gas, which is cheaper than oil. When compared against nuclear power, the costs are almost half.

Moreover, unlike wind which is a mature technology, the price of solar is likely to tumble further – some reckon that it could fall by at least 30% more within the next five years. That would make solar a lot cheaper than wind. Moreover, unlike wind, solar power is predictable to a very great extent. We know when the sun rises or sets. Except for a few stray clouds, people generally know when solar power should be available. Wind is more unpredictable.

True, there is the problem of intermittence with both. Unlike oil or coal (or nuclear), which can guarantee 24-hour supply of electricity, solar and wind generated electricity is available only when the sun or wind is available. That used to be a big problem till recently.  However, with battery costs falling, energy can be stored and used even at times when there is no wind or sun.  Moreover, as the chart shows, lithium ion batteries (the best of storage technologies currently available) has witnessed a sharp reduction in costs, and a dramatic increase in storage capacity.

Today, the situation is different. You have electronics which can smoothen out the intermittent power. And you have lithium ion batteries that can store it and thus power houses for 24-48 hours. Yes, this costs money. But if all such costs were bundled together, along with the cost of a microgrid, they would not account for more than 25% at best. Even if one were to add these costs, solar is likely to remain the most cost-effective option. Both professors believe that the future will lie in micro grids with smart grid technology. This is what this author has been recommending – decentralised cluster networks (http://www.asiaconverge.com/ 2017/10/solar-power-couldtrigger-employment-generation/)

True, batteries and solar power may still not be able to service heavy duty applications like those of the aviation sector. That is where oil will still be required. It may be required for some defence applications as well.

But by and large, it will be in India’s interest to go the solar way (wind is not as plentifully available as solar is).

If solar and battery costs are likely to continue falling, where will oil prices go? Most experts believe that it could hover around US$60 a barrel. Yes, there could be short term spikes. But they should settle once again. This is because if the price were to go even a bit higher, shale gas production would soar, thus causing prices to dip. Shale gas becomes viable at around 40% a barrel. The greater the profit, the more is the temptation to find other reserves as well.

What about lithium prices? Will they soar? Unlikely. That because higher prices will mean more production centres coming up (http://www.asiaconverge.com/2018/01/will-lithium-be-a-bottleneck/). So, either way, oil prices and demand is likely to stay muted. Clearly, there is an urgent need for the MoPNG to revise its plans. The coal ministry should do that as well. The new regime of solar is not very far off.

How much can Bharat Jodo Yatra achieve?

Fear is the key: A tale of two Telugu states