We talk about Hindus being persecuted in Pakistan & Afghanistan but are mum on their deplorable fate in neighbouring Bangladesh, writes Sumit Paul 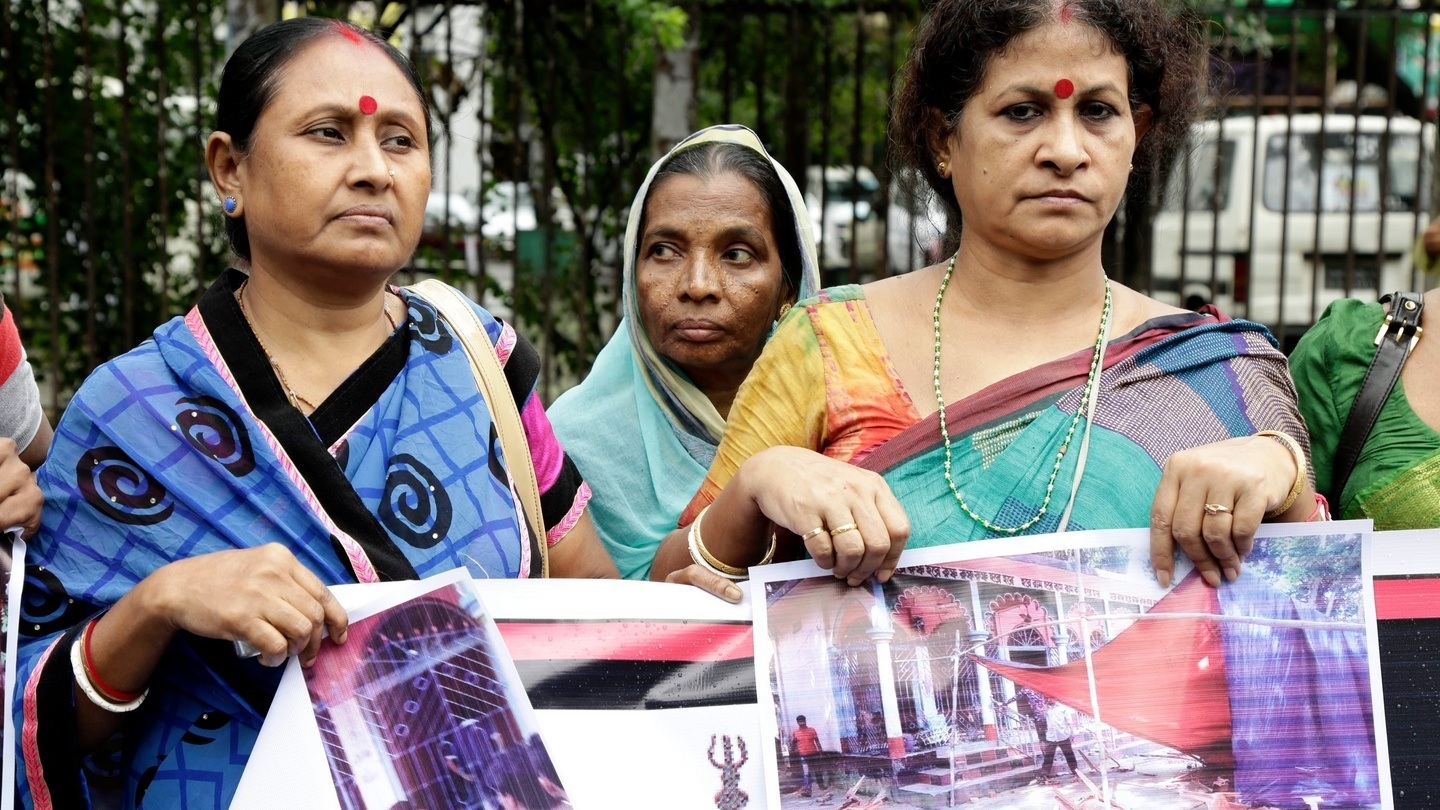 Amid latest reports of attacks on Hindu temples and Durga Puja venues across Bangladesh, the ISKCON temple in the country’s Noakhali area was allegedly vandalised and a member of the temple was killed by a mob. On October 15 night, ISKCON said its temple and devotees were violently attacked by a mob in Noakhali, Bangladesh....................(news in all leading dailies)

A few years ago, US Human rights activist Richard L Benkin said that the minority Hindus in Bangladesh were facing the threat of ethnic cleansing. He added that the Hindu population there had witnessed a major decline and it was even likely the entire community would be wiped out in the future if there were no effective intervention.

We talk about Hindus being persecuted in Pakistan and Afghanistan but strangely keep mum on the same dismal and deplorable fate being faced by the Hindus in the neighbouring Bangladesh. The Hindu population’s dwindling numbers now stand at a mere seven per cent, as per the 2016 figures. Compared to this, Hindus accounted for 35 per cent of the population in the then Eastern Pakistan in 1947, which slumped to 20 per cent following the liberation of Bangladesh in 1971.

According to a study by Dhaka University’s economics professor Abul Barkat, around 11.3 million Hindus left Bangladesh between 1964 and 2013 due to religious persecution and discrimination. Barkat, in his book “Deprivation of Hindu Minority in Bangladesh: Living with Vested Property”, also found that Bangladeshi Hindus had lost 2.6 million acres of land in the country in the last five decades.

As a visitor and researcher, I've been to Bangladesh quite a few times and have seen the plight of Bangladeshi Hindus from close quarters. Since I speak Bengali, I could relate to the Bengali-speaking Hindus as well as Muslims in a more natural and convincing way. Hindus are terribly scared in a country which is fast becoming Hinduphobic.

Until a few years ago, Tagore was Kabindra Rabindra (poet of poets) in Bangladesh as the predominant, rather only, language of Bangladesh is Bengali. Poet Nazrul Islam, though truly great, always came second to Tagore in Bangladesh. But things have changed. Today, Nazrul is being promoted and projected as Bangladesh’s poet laureate and a poet greater than Rabindranath, just because Nazrul was a Bengali-Muslim!

The commonest Bangla word 'Jal ' (water, pronounced ‘j’ol’ was replaced with Urdu-Hindi word paani to the point of hysterical insistence, as no one in Bangladesh can say ‘jal’. It’s always ‘paani’. For example, ‘Gangaar Paani’ (not Gangaar j'ol). A famous Hindu newscaster lost his job when he inadvertently read ‘jal’ in lieu of ‘paani’. This happened a few years ago. Incongruous Arabic words like koshish and khwahish in place of cheshta and icchha in Bangla are being introduced by the hardcore Muslim fundamentalists. Khoda (for Khuda) is being replaced with Allah, as Khuda is a Persian word, whereas Allah is Arabic.

It was Bangladesh, not Pakistan, which gave the most obnoxious parting phrase or benediction Allah Hafiz in place of Khuda Hafiz nearly two decades ago. The gods and goddesses of Hindus are openly ridiculed and jeered at. You get to hear the objectionable word Kafir (infidel) most frequently and nonchalantly in Bangladesh. Even Pakistanis and Saudis don’t use the word kafir for a Hindu so casually as Bangladeshi Muslims do.

Forcible conversions of Hindus are more rampant in Bangladesh than in Pakistan or Afghanistan. Rapes of Hindu women by Muslim men often go unreported in Bangladesh. As a known apatheist, I never faced any issue in Pakistan, but Bengali-speaking morbid Sunni Muslims in Bangladesh always insisted that I embrace their faith (read Islam) as I know so much of Islam and speak Arabic and Persian like native speakers. I could never convince Bangladeshi ‘scholars’ of Islam that a man could exist sans any faith in any damn god/s and man-made religion/s.

The point is: Bangladeshi Muslims have conveniently forgotten India’s humongous role and contributions in its struggle for liberation from Pakistan in 1971. Now they’re more inclined towards Pakistan because the religion is common! Whether it’s a Danish or Dutch cartoon of Muhammad in a faraway Europe, the blitzkrieg falls first in Bangladesh and Hindus have to bear the brunt! The absconding preacher Dr Zakir Naik is more popular in Bangladesh than he’s anywhere in the world! Seminaries advocating Tableeghi Jamaat or Deobandi, Ahle-Hadees forms of Islam are by the dozen in the length and breadth of the country. All these seminaries spew venom against Hindus and their religious practices. Hindus are at the receiving end of this religious apartheid, tacitly practised and promulgated by the government which is in cahoots with the Muslim zealots.

Islam is basically an intolerant and violent faith. Its intolerance is all the more apparent in Bangladesh where the desecration of Hindu temples are everyday incidents. Yet, strangely, hardly anyone draws attention to this. The neighbouring West Bengal and its Islam-loving CM hardly says anything about the persecution of Bengali Hindus in Bangladesh. It’s, therefore, time to focus our attention on the plight of Hindus in Bangladesh. We'll have enough time to descant upon Gandhi-Savarkar debate later.