Unravel the seamy layers of IPL 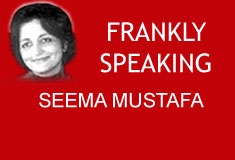 Even as I am writing this, one of the television channels has a ‘breaking news’ — it is always ‘breaking news’ even if the source is a wire agency – with a the scroll announcing that Prime Minister and Home Minister discussed the Lalit Modi issue on the sidelines of the UID meet, and agreed that the government’s image has taken a hit.

Well, it did not need this conversation to establish that the image of the government and the Bharatiya Janata Party has indeed taken a hit. And has also created sufficient confusion within, whereby the normally decisive Prime Minister is finding it difficult to take any decision on Minister of External Affairs Sushma Swaraj and Rajasthan chief minister Vasundhara Raje. Both have been charged with helping ‘fugitive’ Lalit Modi, wanted in India under what Finance Minister Arun Jaitley at a recent press conference described as a ‘light blue’ notice issued by the Directorate of Revenue Intelligence as per the instructions of the Enforcement Directorate. So while defending his Cabinet colleague for helping Lalit Modi get his residency permit in the UK, Jaitley made it clear that the former IPL Commissioner was indeed wanted by the Indian law. And all his denials to the effect from London, or more recently Montenegro, were baseless.

There is a basic difference, however, in the government’s defence of Swaraj and its reaction to Raje whose son is also allegedly involved in a financial scam. The RSS and the BJP top brass, including President Amit Shah, came out in strong defence of Swaraj. The government fielded two senior ministers — Home Minister Rajnath Singh and Jaitley — to defend her at a press conference. And make it clear that the party, the RSS, and the government were all behind her, and hence there was no question of disciplinary action. This despite the fact that Swaraj went out of her way to help settle a man wanted under the Indian law, and whose colleague, Arun Jaitley, in this instance was presiding over departments probing his alleged scams and frauds.

However, no such effort has been made for Raje who seems to have been left to fend for herself. In fact, reports suggest that Shah has refused to meet her. Her statement of support, which was released ‘inadvertently’ by Lalit Modi’s lawyers in a 250-page dossier of legal documents, clearly said that this should be kept hidden from the Indian government and authorities. In other words, as the Leader of the Opposition in the Rajasthan Assembly, she was conspiring to support a man wanted by the Indian law on the condition that the government was not informed. Well the statement dated 2011 has seen the light of day now, and thrown not just Raje but the entire BJP into a tizzy.

Lalit Modi, in a subsequent interview to India Today channel, has maintained that Raje had signed this statement, and that she would have personally appeared in the British courts in his favour but could not as by then she had been elected Chief Minister of Rajasthan.

IPL has become a cesspool of greed, power, money and women; every senior politician seems to be chasing a franchise with Ministers losing their jobs —like Shashi Tharoor in the Congress led UPA government — when scams hit the ceiling. Bids of thousands of crores are placed for cricket teams, with film stars, politicians and even media dons throwing in the big bucks to buy cricketers as it were. No questions are asked, no eyebrows are raised, as thousands of crores are placed on the table by individuals for a franchise. It stands to reason that the pay offs must be substantial, far higher than the bids, to attract this interest bordering on competitive desperation.

There should be a probe as is being demanded by the Opposition into the Swaraj and Raje incidents, but at the same time there should be a big, independent enquiry into the IPL per se. Each franchise should be investigated separately by a commission of experts — non-partisan, but which might be too much to expect from the current government — from the inception till date. It will no doubt reveal a sordid saga of intrigue, power, money and more involving the creamy layers of the rich and the powerful, but perhaps not so beautiful.

Swaraj and Raje have kept a low profile since the second scandal broke. Lalit Modi entertained himself and Indian viewers with an interview that actually dug the hole deeper for the two BJP women who had befriended him. He insisted that Sushma Swaraj was a close family friend, that he knew her husband as many reports had stated, as well as her daughter. And that she had supported him on humanitarian and personal grounds. He said the same of Raje, going on to disclose that the chief minister had taken his wife personally to Portugal in 2012-2013 for treatment for cancer. Within hours the media here reported of how the research centre where his wife was treated later opened a unit in Rajasthan and was given over eight acres of land and a hefty sum of money to do so.

Every passing day thus makes the story worse for the BJP. More so as Lalit Modi sings like a canary, and does not seem to realise the consequences of his words. He has gone silent now but clearly this will not be for long. There is a great deal of bluster in his talk: that could make life very difficult for those he counts as his friends.