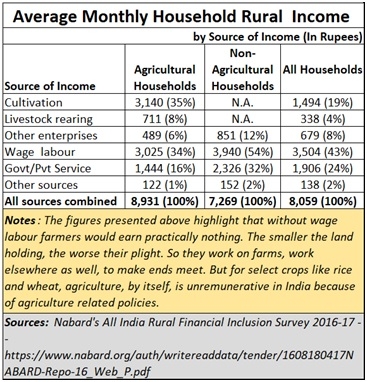 The government has introduced some path-breaking bills for the improvement of agriculture and the lot of farmers in the country. For that the government deserves two cheers.

The third is being withheld, because of several reasons. But first, the reasons why the two cheers are warranted.

All these will certainly go a long way in empowering the farmer.

But this is where the smiles should end.

· At a time when the economy is going downhill, and unemployment is rife, there was a need to focus on both. The bill tends to dissipate energies. This is the time to hold the economy together, not create divisions. In fact, the new bills could see job destruction in the short run.

· What about implementation? Creating a parallel transport system, cold storage and warehouses owned by farmers, is the first imperative step. Now the farmers will have to use the same facilities that APMCs have. Self-defeating.

· Little clarity about the role of the FCI (Food Corporation of India) and SWCs (State Warehousing Corporations). Will they be compelled to source their procurement through eNAMs? If yes, that will be wonderful. This step is required (http://www.asiaconverge.com/2020/05/atma-nirbhar-and-agri-markets/). It will prevent large-scale corruption. Small farmers lose. Currently, politically connected farmers win big-time. Compelling the FCI to purchase through eNAMs could be a game-changer.

· The MSP (Minimum Support Price) concept needs further clarification. Do remember that MSP with procurement has been reserved only for rice and wheat and not for other crops. Occasionally, it has been extended to pulses. But this is not a permanent feature. Other grains – millets, other cereals like corn and maize – and pulses are out of the reckoning as far as procurement is concerned. Announcing an MSP without the benefit of procurement, makes the announcement a joke. Commodity exchanges have recommended to the government several years ago that the government should step in to purchase any grain or pulses if the market prices go below the MSP. (http://www.asiaconverge.com/2020/02/budget-2020-farmers-will-now-reap-govt-not-sow-agri-distress-continue/). The MSP then becomes the price benchmark with a safety net. It compels the trader to pick up the crop at those prices (or nearabouts).

· Contract farming ought to have permitted lease of farmlands for a maximum period of say three years. A clause could be inserted stating that the lease amount shall not be less than the annual average revenues garnered per acre from a region. This way, poor farmers would get an income without losing ownership of land. They can change their mind three years later. They also have the option of earning as farm labour. When land is taken on lease, disputes over contract farming are avoided. Today, it is difficult to enforce a contract if market prices go higher than contracted values, and the farmer chooses to sell his crop elsewhere. But when the farm is controlled by the grower, the disputes disappear.

· Finally, study the table alongside. The farmer gets precious little from cultivation. Even animal husbandry, usually cattle milk, fetches him barely Rs.711 a month. Normally, even at Rs 26 a litre and a yield of seven litres a day, the farmer should get Rs.4,500 a month for 25 days of milk production. He gets less, because states like UP, the largest milk producer in India, pay him only Rs 14-16/litre (http://www.asiaconverge.com/2020/09/india-plundered-again-by-tweaking-rules-against-prosperous-states-and-encouraging-profloigacy-irresponsibility/). That gives the farmer a surplus income of barely Rs 2 per litre. If the government had only made Rs 26 per litre compulsory for the country’s largest milk-producing state, the farmer would have seen a five-fold increase in income. UP is a BJP-ruled state. This law should have come first. Farmer incomes would have soared. The agri bills could have come later.

Pushing the agri bills before the milk pricing measure is putting the cart before the horse. India has a phenomenally successful cooperative milk model in place. Even responsible private sector players like Hatsun pay Rs 26 a litre. But UP exploits farmers. If farmers must be protected, start with UP’s milk-producing farmers. Empowerment of farmers must begin from home.

The new bills will make both farmers and traders lose – at least temporarily. The resultant pain could be a lot greater than people imagine.