HomeAnalysisThe US has just given the EU a kiss of death

The US has just given the EU a kiss of death

Even before the present president of Russia, Vladmir Putin, assumed charge, the West was doing all it could to undermine the very principles Mikhail Gorbachev stood for and which the Western nations promised to abide by

Mikhail Gorbachev died on 30 August 2022 (he was born on 2 March 1931). And when he died, there was a confused pain among Russians, and a muted exultation among Western government-controlled media. Said Joe Biden, as reported by the CNN, “As leader of the USSR, he worked with President Reagan to reduce our two countries’ nuclear arsenals, to the relief of people worldwide praying for an end to the nuclear arms race,” Biden added that Gorbachev’s reforms led to “a safer world and greater freedom for millions of people."

Most western media underscored that unlike the present regime, Gorbachev wanted world peace. What they did not say is that even before the present president of Russia, Vladmir Putin, assumed charge, the West was doing all it could to undermine the very principles Gorbachev stood for and which the Western nations promised to abide by. 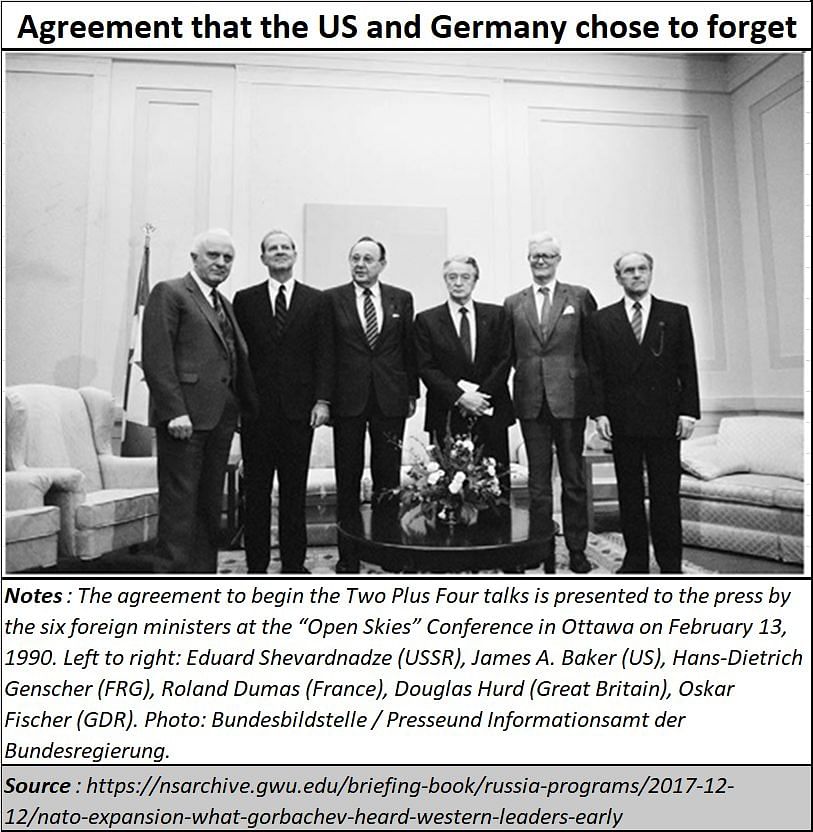 By implication, while Gorbachev stood for peace, the Western world stood for instability, even war, as the events that led to the Ukraine war clearly show.

To understand the sequence of events, it is necessary to know more about the discussions that took place between the Western powers and Gorbachev. What is interesting is that many of the so-called fact-finding websites which are committed to inform the public about fake news kept denying that these discussions ever took place.

Both sites are less hostile to such an interpretation, than they were in January 2022.

As luck would have it, some information got declassified in the US. More facts began tumbling out.

The US as spoiler

Yes, Gorbachev wanted peace, but only on the condition that the western powers – and that included NATO – did not try edging close to the erstwhile borders of the USSR. Everyone agreed. “not one inch eastward” was the assurance given by U.S. Secretary of State James Baker. What was sad is that even Germany which wanted a unified country, and sought the demolition of the Berlin Wall, also joined hands with the US in breaking its pledges to Gorbachev.

It first supported Ukraine joining the NATO (a clear breach). It then scuttled the Nordstream 2 which was built to bring gas directly to Germany from Russia. In fact, the US allowed NATO to partner with one East Block country after another. It was provoking Russia into a confrontation through proxies. Ukraine and Nordstream were the last straws.

Nord Stream 2 would have had a capacity of 55 billion cubic meters of gas, effectively doubling the volume delivered by its predecessor, Nord Stream 1. Both have been built to allow Russia to access the German market directly, without pumping gas through pipelines in Ukraine, for which Moscow pays transit fees.

That would have helped Germany bring down energy prices. Now Russia has decided to close down Nordstream2. You cannot sanction Russia without the latter too deciding on some sanctions of its own against those who had betrayed an old agreement.

Not surprisingly, energy prices have begun shooting up in Germany and the whole of Europe. As Oil Price put it on 2 Sept 2022, “According to risk consultancy Verisk Maplecroft, the world is facing an unprecedented rise in civil unrest due to rising inflation and energy costs. . . . In Europe, even some of the wealthiest nations are facing extreme risk of protest, including the Netherlands and Germany . . . While wealthy governments may be able to buy more time, it appears that the worst of this crisis is yet to come.” 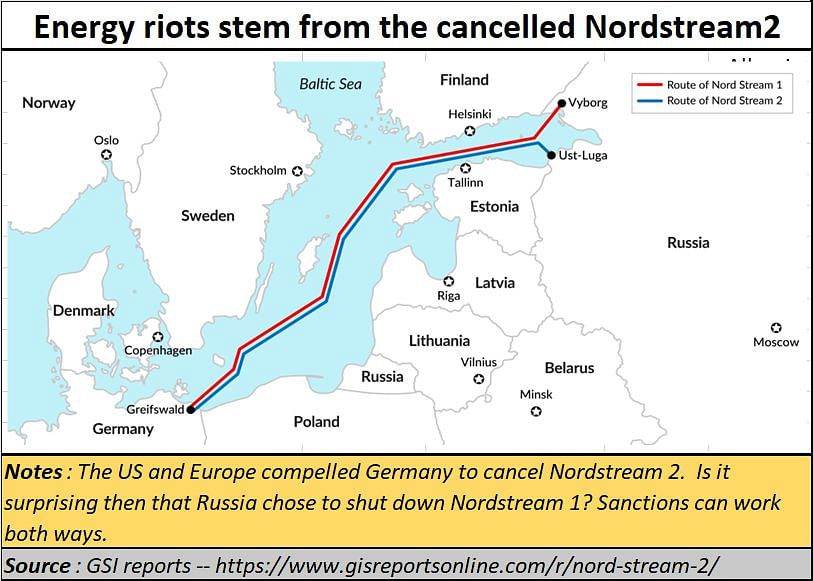 A week earlier, on August 26, 2022, Foreign Policy’s website remarked, “It’s unclear how long industries and households can hold together. The United Kingdom, for instance, is looking at double-digit inflation in large part due to skyrocketing energy prices and a sharp downward revision to GDP estimates, according to Oxford Economics. Europe isn’t much better off. We think the European manufacturing sector will experience a recession over the coming quarters, but there will also be implications for households.” The increase in gas and electricity prices will hit consumers hard, and we think the magnitude of the price rises makes further government intervention very likely.

By September 3, tens of thousands of Czechs took to the streets in Prague to express their concern over the energy crisis.

They demanded more support from the government to continue paying the bills and groceries. Many demonstrators also carried banners denouncing membership of the European Union and NATO.

Enraged protesters in Naples, Italy, burned their energy bills and besieged the town hall yesterday. “We don’t pay the bills! Now it’s going to be chaos!” they chanted. Meanwhile, the outgoing Italian government is working on contingency plans to save energy and keep bills low, ministers said last week.

There is also a lot of social unrest in the Netherlands about the increased energy prices. To somewhat compensate for the screeching inflation, a purchasing power repair package of 15 billion euros in the making, especially aimed at low-income and middle-income earners. The package will be officially presented on Prinsjesdag.”

Reuters too had similar reports. Europe's wealthiest nations face rising risks of civil unrest over the winter, including street protests and demonstrations, due to high energy prices and mounting costs of living, according to a risk consultancy firm.

Both Germany and Norway are some of the developed economies experiencing disruptions to everyday life because of labour actions, a trend already seen in the United Kingdom, Verisk Maplecroft's principal analyst Torbjorn Soltvedt told Reuters.

"Over the winter, it wouldn't come as a surprise if some of the developed nations in Europe start to see more serious forms of civil unrest," Soltvedt said.”

Another website reported that the protests of thousands of citizens against the energy and social policy of the federal government were reported in several German cities. The protests began on Monday in Leipzig, Saxony, with up to 3,000 people unhappy with rising energy and food prices taking part.

A couple of days later, Sputnik News reported that the German Federal Office for the Protection of the Constitution (BfV), the country's counterintelligence, expressed concerns that various left and right-wing forces in the country might stage massive demonstrations in the cities against surging cost of living.

They believe that scenarios akin to the September 3 massive demonstration in Prague, Czech Republic, which saw at least 70,000 people demanding the government's resignation, are possible in Germany as well.

Will Germany defuse the crisis?

German newspaper Die Welt noted that several right- and left-wing parties indeed are already preparing to hold demonstrations this fall. Die Linke and Alternative for Germany are two parties that prepare protests under the slogan of "hot autumn".

The left will be holding the first demonstration in Leipzig already on September 5 and are expected to be joined by the AfG mirror protest under the motto "Germany comes first" and "hot autumn, not cold feet".

The peace that Gorbachev wanted may not come. In its place there could be more strife, even the dreaded “never again” war, where there will be no winners.

Germany could have prevented this if it had not abrogated the Nordstream 2 deal. Even now, the survival of Western civilisation may lie in the hands of the Germans.

What will happen will become clear this winter, when consumers’ anxieties and frustrations will be at a peak. When cornered, politicians are capable of reckless behaviour. One can only hope and pray events don’t end that way.