The missing dead series – Part III: Can India be taught to respect the dead?

Last week, the Supreme Court of India reserved its verdict on pleas seeking directions that ex-gratia compensation of Rs 4 lakh be paid to the families of those who have died of Covid-19.

The demand for compensation is understandable. A pandemic is a national calamity. When this aggravated by government mismanagement, demanding compensation can be justified.

But compensation is a temporary solution. Mismanagement and corruption must be curbed. 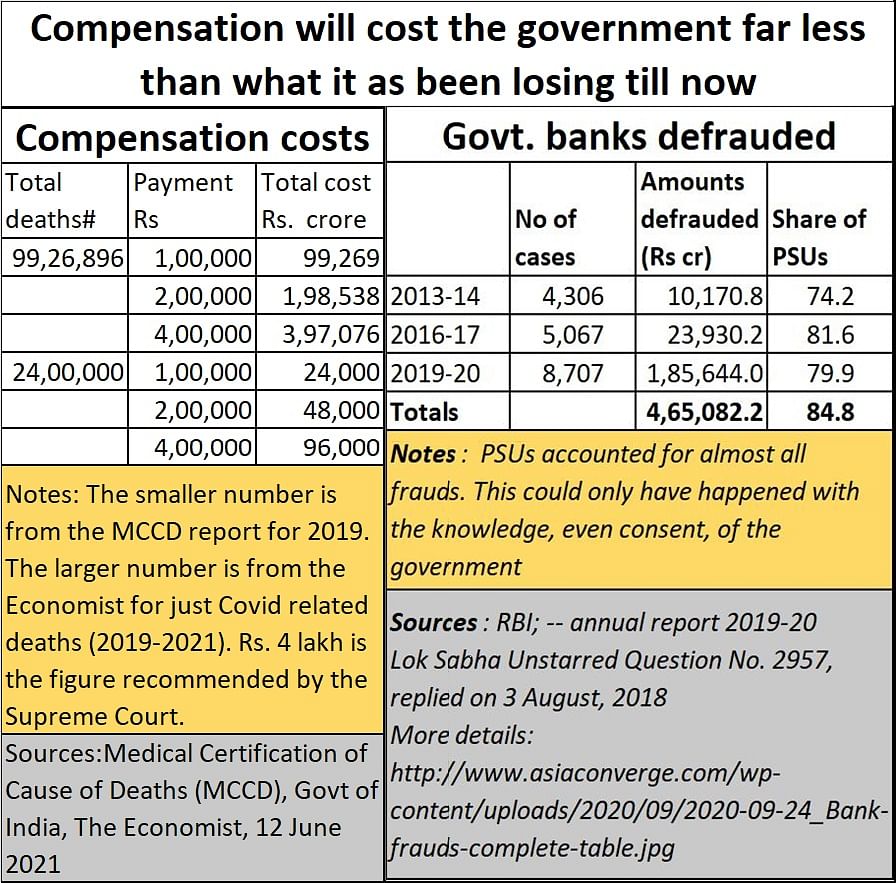 This article is not recommending the compensation amount that should be paid. It highlights how compensation can be a tool for cleaning up a system.

The best way is to compensate all deaths (not just Covid deaths). Ideally, the compensation should be over Rs.1 lakh per death.

There are several advantages in doing this.

First, most people don’t have access to good medicare. Death is therefore, usually, on account of non-availability of decent medicare which the state if required to provide. Compensation is therefore desirable.

Second, most families are often driven to bankruptcy on account of medicare costs. Thus, just like Provident Fund, which cannot be attached or mortgaged, this compensation is provided to the family only after a person dies.

Third, it will compel families to insist that each death be registered. It teaches people and the state that the dead should be respected.

It actually cleanses a system almost overnight. Government officials will not have the excuse of denying compensation unless there is no record of the name in Aadhaar or election registers.

Thus, the moment compensation is paid, the name is struck off electoral and Aadhaar lists. Consequently, ghost voters and entitlement seekers in the name of the dead person just disappear.

No entitlements being paid in the name of the dead will reduce outgoes from the exchequer.

Together, the saving for the government will easily exceed the compensation being given out.

It is obvious that many legislators and bureaucrats won’t like this scheme. It compels the Census authorities to cancel names. It compels the Election Commission to sit up and take notice of the person who is dead – now officially dead because of the compensation claimed.

The courts will also have to compel the Election Commission to ask the government to weed out other bogus Aadhaar cards by ensuring that the Census enumerators list the Aadhaar card numbers against each legitimate voter. This way, all ‘widowed’ Aadhaar cards can be further scrutinised and cancelled. The system can be sanitised overnight.

This will require the Supreme Court to ask the Election Commission to desist from trying to permit voting from anywhere That would be dangerous, because it would allow bogus voters to cast votes in constituencies where the contest between two contenders is keen, and the final vote count shows up a very slim difference between the top two contestants.

In fact, the Election Commission should go a step ahead and state that voting must be allowed only from places where people have a legal residence. That would deter the creation of more slums. Census data shows that slums have been draining the country of entitlements ten time larger than what they ought to be. Slums have an average household size of just 0.5 (preposterous) compares to over 5 on an average for the entire country. Since entitlements (rations, gas cylinders, subsidised electricity etc) are given to households, not individuals, there is a tendency to create more households per family.

By insisting that people should vote only from the place where they have a legal residence will prevent squatters. It will also reduce more ghetto like conditions which have been super spreader locations during pandemics.

India can change.But if its legislators have the vision and political will.If they don’t, the courts and the Election Commission should step in and address such aberrations.