The Mamata Banerjee-Sonia Gandhi bonhomie after their meeting in July, seems to have fizzled out, writes A L I Chougule

Ignoring the Congress or denying the grand old party its due in an alliance of like-minded parties against the BJP, is political adventurism that will only favour the latter
A L I Chougule 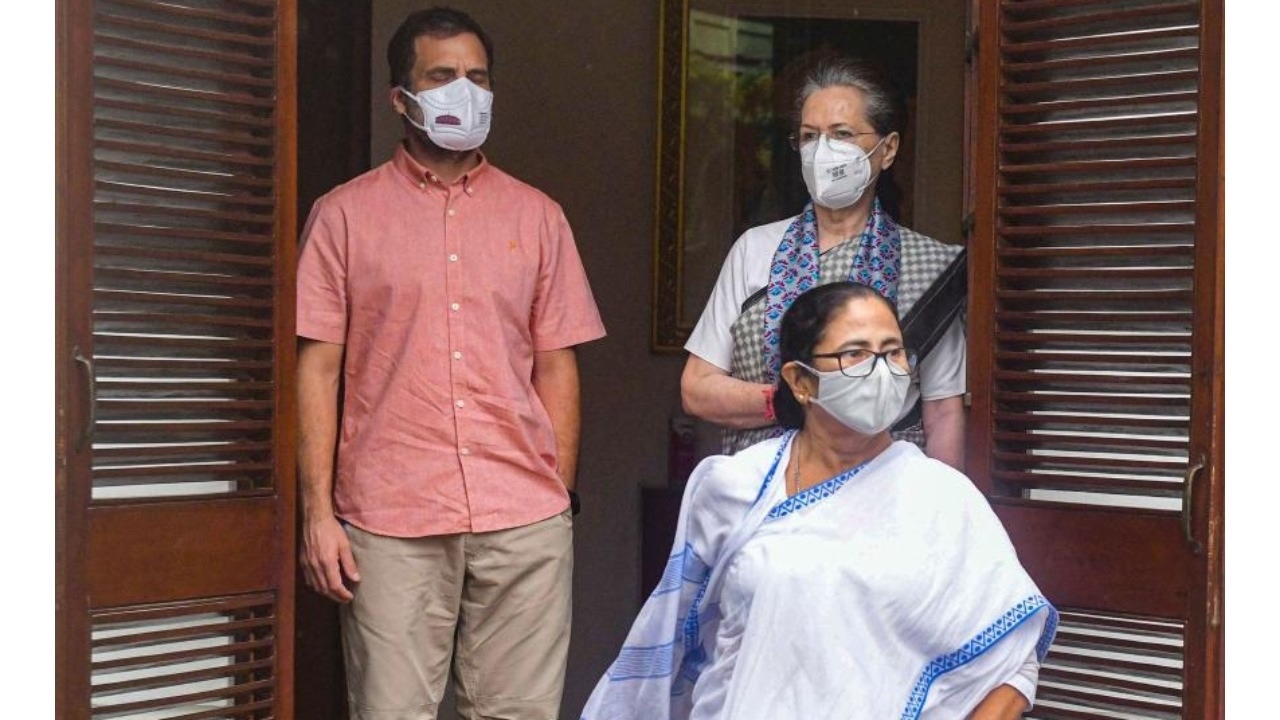 Opposition unity to fight the BJP nationally seems to have run into trouble as the Trinamool Congress, headed by Mamata Banerjee who has emerged as the doughtiest Opposition face after winning the Bengal election, and the Congress are at daggers drawn over the recent instances of ‘poaching’ of Congress leaders by the TMC, with the grand old party finding itself in a tight spot.

The show of bonhomie that was visible earlier between Mamata and Sonia Gandhi after their meeting in July to discuss opposition unity, seems to have fizzled out with the TMC taking long strides to expand its footprint nationally and vilifying the Congress for its alleged failure to take on the BJP.

With Mamata looking to explore a national role for herself, possibly as leader of the Opposition coalition, a position held by the Congress since 2014, the TMC’s serious efforts to expand its presence nationally at the expense of the Congress has put a question mark on the process of building Opposition unity. The TMC has been going all out to expand and gain a foothold in BJP-ruled states, many of which have the Congress as the main opposition party.

While the TMC says it has every right to expand its footprint nationally even if that comes at the expense of the Congress, its decision against engaging in any form of floor coordination with the Congress in the current winter session of Parliament indicates that the Mamata Banerjee-helmed party is keen on sidelining the Congress as the face of united Opposition front.

During her four-day visit to Delhi recently, Mamata Banerjee did not meet Sonia but she chose to meet disgruntled Congress leaders and while she was in Delhi, the Congress unit in Meghalaya split. Not only did the grand old party lose its status as the main opposition party in Meghalaya, but 12 of its MLAs switched over to the TMC. Earlier, several leaders of the Congress, like Sushmita Dev, former Goa CM Luizhino Faleiro, cricketer-turned-politician Kirti Azad and former Haryana Congress chief Ashok Tanwar joined the TMC.

In the past, the TMC has termed the Congress an ‘incompetent and incapable’ party which has done nothing to fight the BJP in the last seven years. Recent developments have jolted the Congress, which has so far refrained from directly attacking the TMC supremo. Instead, it has blamed poll strategist Prashant Kishor for luring Congress leaders into the TMC fold.

Don't rule out opposition front yet

Though the fissure between the two parties is evident, it is too early to write off Opposition unity, given that the general elections are still two-and-a-half years away. But for now, it appears that the TMC has made it quite clear to the Congress that it will not wait for the grand old party to take the initiative to forge Opposition unity. Neither will it wait for the Congress leadership to resolve its internal issues and get its act together. This was evident from Mamata’s assertion following her meeting with NCP chief Sharad Pawar in Mumbai last week, when she declared that there is no United Progressive Alliance (UPA) any more, and that the Opposition umbrella led by the Congress is over.

When the TMC chief says that a strong Opposition alliance headed by those working on the ground will emerge, it means that Mamata believes that the Congress and its leadership are not fighting the BJP-led government as strongly as they should. Her narrative is that the Congress is moribund and doesn’t have the strategy to counter the BJP and is even ignoring parties trying to counter the BJP.

Truth in what Mamata says

There is some truth in what Mamata is saying about the Congress and its leadership, which has been almost in a state of inertia over the last two years: neither has it elected a full-time president, nor is it seen to be actively countering the BJP on ground. But ignoring the Congress or denying the grand old party its due in an alliance of like-minded parties against the BJP, is political adventurism that will only favour the BJP.

While there is a flurry of activity around the TMC and its chief Mamata Banerjee who is making a serious bid to go national, the simple truth is that the TMC is largely a regional party. The arithmetic of electoral politics does not add up to the TMC’s plan of dislodging the BJP from its current position of formidable strength if it does not include the Congress in its strategy. It is true that the BJP has an edge over the Congress in states where the latter is the main Opposition party. It is also true that the BJP rarely wins in states ruled by regional parties.

But rhetoric apart, there is a problem with Mamata’s centrist push to stake her claim to the centrist space in Indian politics that the Congress has occupied. Her outreach to Opposition leaders, dissident Congress leaders and civil society hint at a tactic aimed at positioning herself as a national leader and face of the opposition ahead of the 2024 general elections. But how? The TMC hardly has a presence and organisation infrastructure outside Bengal, save a few tiny states in the northeast.

It’s an onerous and arduous task to capture new territories without a traditional electoral base. It is not rocket science to understand that an anti-BJP front cannot shape up as a meaningful entity without the Congress, which still has about a 20 per cent vote share.