HomeAnalysisThe government’s myopia will blight both IT and digital payments, writes RN Bhaskar

The government’s myopia will blight both IT and digital payments, writes RN Bhaskar

Yes, in some ways the government has succeeded. Digital payments have soared, at least in terms of the number of transactions. But values appear to have stagnated.

The government’s myopia will blight both IT and digital payments, writes RN Bhaskar | Photo credit: Pixabay
Follow us on

The government loves thumping its chest when digital payments soar. This was, after all, one of the stated objectives of the much-touted JAM Trinity - Jan Dhan, Aadhaar and Mobile (https://pib.gov.in/FeaturesDeatils.aspx?NoteId=151163&ModuleId%20=%202). As the Reserve Bank of India (RBI) itself points out, “Jan Dhan accounts, Aadhaar and Mobile connections, taken together, have helped lay the foundations of a Digital India where a vast array of Government services are made available directly to the citizen with enhanced ease of access without the presence of any intermediary (middle-men).”

A s another government website also proclaims, (https://pib.gov.in/FeaturesDeatils.aspx?NoteId=151163&ModuleId%20=%202) “UPI has gone a long way in making digital payments a habit, and in firmly placing India on the track toward a cashless economy. In the month of August 2022 alone, 346 banks were live on the UPI interface, with 6.58 billion financial transactions being carried out for a total value of Rs. 10.73 lakh crores." 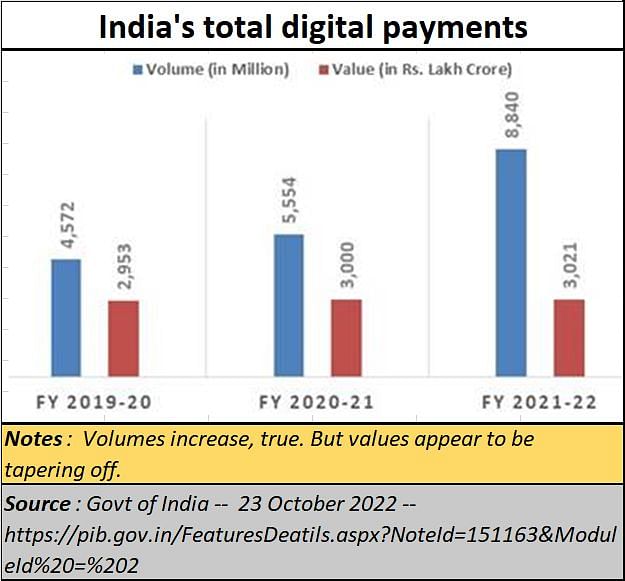 Yes, in some ways the government has succeeded. Digital payments have soared, at least in terms of the number of transactions. But values appear to have stagnated.

One reason for this could lie in the government’s own willingness to allow quick transactions on the one hand, and snail pace dispute resolution on the other. It has also failed in implementing speedy measures to prevent cyber-crimes. For instance, even after waxing eloquent about the need for dispute resolution, the government has yet to appoint a regulator for digital payments. Thus, you can conduct transactions with lightning speed, and end up regretting having made that transaction for months thereafter, either because that person has been defrauded, or because there are few ways to get his grievances redressed. There are three types of grievances that need to be resolved. One is when a person has been defrauded. This is especially galling when it is not because of a lack of care on the part of the customer, but on account of a lapse on the part of the bank or the paying merchant. That is when a regulator is sorely missed. Common folk don’t have the ability to approach the courts.

The second type of fraud – it can be called nothing else – is when governments behave like fraudsters. Consider for instance the move by the government of Maharashtra to introduce t he NA Tax (non-agricultural tax) with retrospective effect from 2006. When challenged in court, the government quietly issued a notification announcing the withdrawal of the tax. But the sums of money that were collected before the withdrawal of the order, have not yet been refunded (https://asiaconverge.com/2022/01/new-unfair-and-controversial-real-estate-tax-laws-in-maharashtra/). There has been no public announcement of the manner in which the money would be refunded. This is scandalous.

W orse, government websites do not function properly, and amounts are debited through malfunctioning websites on account of which no receipts are issued (https://asiaconverge.com/2022/01/new-unfair-and-controversial-real-estate-tax-laws-in-maharashtra/). This author has been a victim of such irresponsible government owned and developed websites. To date a receipt is not forthcoming, despite several reminders.

A regulator could take on the job of penalising state governments and even ordering the refund of such amounts.

Third, the government appears to be torn between promoting digital transactions and silently abetting cash transactions. Consider how the RBI wanted crypto currency trades banned in India (https://www.indiatoday.in/india-today-insight/story/why-rbi-wants-ban-on-cryptocurrencies-1978307-2022-07-21). The government, however, does not want it banned and continues to drag its feet. Or consider the lethargic manner in which digitisation of land records has not been taken by both central and state governments (https://dilrmp.gov.in/#). Yes, the portal is there. Statements of intent are made time and again. But actual implementation of one of the most critical needs for most farmers and common folk is not visible.

And then the penny drops. Most politicians are involved in land scams for decades. Remember Maytas – the acronym which was just Satyam spelt backwards? On 25 April 2009, this author wrote about how IL&FS would soon take over Maytas (which it did despite protests and denials). Maytas held substantial land banks that were acquired on behalf of politicians (https://asiaconverge.com/2009/04/who-will-take-over-maytas/).

Then you understand why, after IL&FS collapsed, the company was not allowed to go to the NCLT for being auctioned to the highest bidder. The reason was that the land banks had to be handled carefully, monetized, and then some of the outstanding moneys recovered. That is why the government chose to appoint a trusted banker to deal with these irregular land holdings. It is at such times that one realises that the government itself is party to the frauds and scams that take place from time to time.

T hat could also be a key reason why the government does not want a digital payments regulator. That could also be the reason why cash transactions continue to grow in a market where the government wants to promote digital payments. Curbing cash transactions was, after all, the ostensible reason for introducing demonetisation. It was meant to reduce cash transactions and reduce the prevalence of counterfeit currency Both objectives have failed.

That could also explain why the RBI has yet to explain why Google continues to operate as a payments facilitator even though it does not have the RBI’s nod for doing so (https://www.rbi.org.in/Scripts/PublicationsView.aspx?id=12043). Unlike Google Amazon has such a clearance. So, why is the RBI silent?

Maybe, an independent regulator could do much more that government officials and legislators have been able to do till now.

Had the government allowed digitization of land records, or the creation of an independent regulator who could (a) inspire confidence in digital payments, and (b) allow for a healthy growth of the IT industry in India, the country’s GDP could actually begin climbing at a fast pace once again. Currently, almost all IT companies are facing a slowdown (https://www.livemint.com/mint-top-newsletter/twichplus.html). True, this is a global phenomenon. But the solutions for India are easy, if only the government displays some political will, and does not turn a blind eye to corruption and abet the love politicians have for cash and benami land records.

Maybe, getting the government out of management of cash may also allow for a reduction in counterfeit currency.