The double vision of the guys at RBI

If keeping eyes closed is also considered, the RBI has three visions

The people at RBI suffer from a double vision. At times they do good, even amazing, things. But most often they refuse to move. They allow corruption, cozy relationships and even encouraging malfeasance.

At one level, RBI made a scintillating move of permitting DBS to take over the business and assets of Lakshmi Vilas Bank (LVB). Arguments about the RBI not calling for auctions ring hollow because of several reasons.

Most financial deals are done behind closed doors, not through public auctions. It is easy to make money flow out of a bank, or even the country, at the click of a mouse. Such deals are negotiated privately and are given effect only when the timing is right.

Moreover, shareholders cannot complain. They knew for years that the bank was being mismanaged (see chart below). For years there has been a ding dong battle over who should do what at the bank. Potential partners have come and gone. Some, like a real estate developer, were obnoxious, and it was left to the RBI to disqualify the party as “not fit and proper”. Yet, major shareholders clung on to their shares. They knew that the bank had eroded its net worth. The shares were now worth nothing. So why should they get anything for them now? It must also be remembered that unlike the IBC’s officers, the RBI is a regulator. It is not an auctioneer. Its main job is to protect people’s faith in banking. It is responsible to depositors and to some extent employees as well. Certainly not to the shareholders. And by picking up a clean white knight like DBS, it has saved the fortunes of both depositors and employees. And it has restored faith in banking.

There are people who talk of valuations. Each branch is worth x crore rupees, they exclaim. But that is only when they have a banking license. It is the bank license that gave them a value. You cannot trade a bank license. They do not have a leg to stand on. Over. Case dismissed.

It was shocking to find an RBI team recommending that corporate groups be allowed to take up banking licenses.

Had the committee forgotten how the central bank had already shot down a real estate developer company from taking over the shares of LVB?

Has it forgotten that its difficulties in trying to control government owned banks will get multiplied several times over if a (powerful) corporate house comes into the picture? Has it forgotten the complex maze of financial transactions that groups like Videocon and Essar have created for financing and mortgaging titles, projects, and assets? And this was through loans that could be called back. What if the loans could be shown as being backed by assets which corporate groups are quite adept at?

Just look at how corporates have bled the banking system (see table). It is corporates, not farmers., who stole bank money. And you want to trust the fox with the coop? Absurd logic. 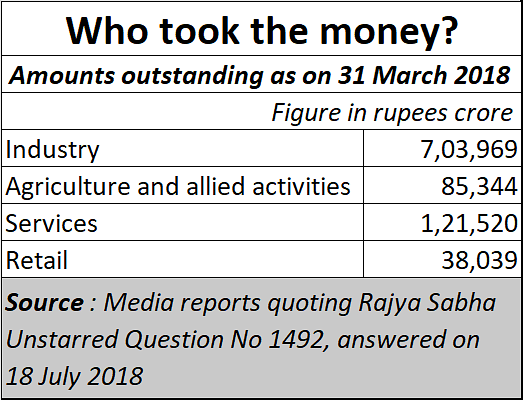 True, existing legislation prevents the RBI from transferring the ownership of such banks to another player like DBS, but it has the power to remove directors, or make public the names of the worst defaulters. It has resisted both moves.

A former governor of the RBI wanted to end the cozy relationship between RBI appointed directors on company and bank boards – a move that was shot down by the government.

But the present management has not revived this proposal. How can the RBI be both a regulator and a participant at the same time? Does it not realise the power of lucrative incentives RBI appointed directors (or even government appointed directors) get? And yet, it is willing to work with a system that is bound to create more leaks in the basket.

There is yet another problem with the RBI. At times it prefers to pretend that there is nothing wrong. As a regulator is ought to have put its (proverbial) foot down when the finance minister directed bankers to ensure that all Aadhaar cards were linked to bank account numbers and to PAN cards by this year end. It should have protested.

It knows very well that there are bogus Aadhaar cards floating around. The RBI knows quite well that the number of bogus account holders could well be over 197 million (see table). It knows that each account holder has the ability of creating tax-exempt deposits of around 1.8 lakh each year. And it knows that even if half this number were to be considered, it would create a money laundering opportunity for at least Rs.15 lakh crore each year – year after year. That could destabilise banking further. 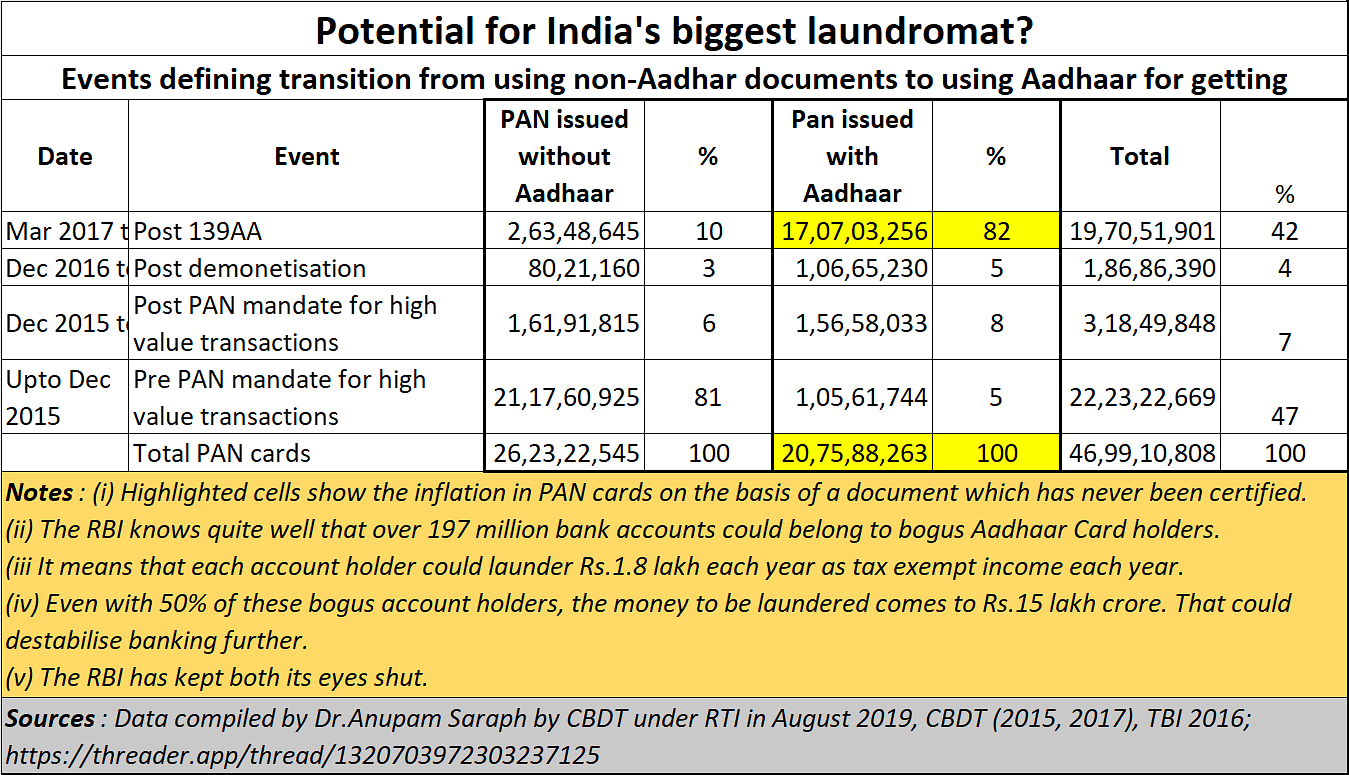 And if a friendly corporate group were to own the bank in which these bogus account holders were to exist, you can imagine the instability it could create in money markets.

And yet, the bank regulator has kept both its eyes shut – first to the proposal that Aadhaar cards alone can be used for opening bank accounts. Second to the exhortation that PAN cards be given to each Aadhaar card holder. And third to the finance minister’s directive to banks, that they must complete this linking by the end of 2020. And yet the RBI stays quiet?

Lessons for the government

But all things said and done, the takeover of LVB by DBS has a lesson for the government as well.

If it wants better governance and better education, it could do a similar exercise with parties mismanaging educational institutions that corrode the fabric of India’s future.

You can find examples of mis-governance in many medical and engineering colleges. The government should start measuring outcomes of these colleges diligently, maybe even retrospectively for the past three years.

This is not difficult. All it must do is to evaluate the scores students get for each college, and whether the passing percentages were lower than the percentages they got when they took admissions with the college. A good college is supposed to improve the learning capability and potential of students. If it worsens them – averages seldom lie, and individual cases get averaged out magnificently – the management is bad. If it improves them, the management is good.

So, begin by transferring managements of schools along with their assets and licenses to institutions that are well run and have a track record of excellence.

You will then see managements pay more attention to their teachers, and the facilities they provide for students.

Once this exercise is over, begin with schools.

Such an approach would change the quality of education in India. It would start sifting the good from the bad. It would allow the bad to be weaned out. It would permit India to improve its HCI and HDI scores. Gradually, it could help India improve its per capita GDP as well.

Is the government willing?

HomeAnalysisThe double vision of the guys at RBI