State of churn: Who will be ‘Gujarat-no-Nath’, even as AAP sees an opening, asks Shekhar Iyer

It was the legendary Kanhaiyalal Munshi (1887–1971) who coined the term ‘asmita’ for Gujarat… . We can be sure that Modi and leaders like Amit Shah are aware of the ‘asmita’ in the state today and what needs to be done. The time to redress the issues plaguing governance is now. It is in this context one also asks the question: Can Arvind Kejriwal’s Aam Aadmi Party (AAP) gain in Gujarat?
Shekhar Iyer 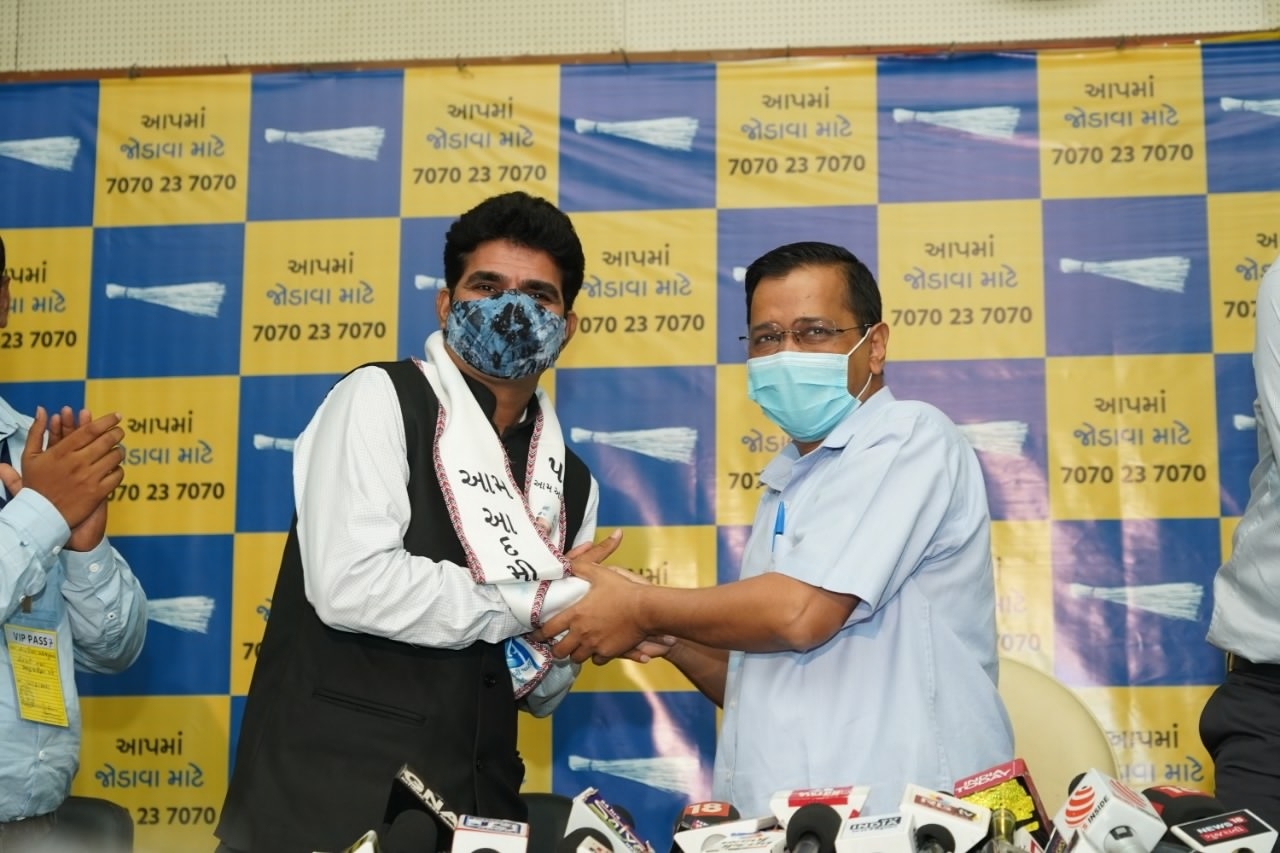 If Prime Minister Narendra Modi has to win the Lok Sabha elections of 2024 for a third term, it is very, very important that the BJP improves its governance at the Centre and in key states. It must win the assembly polls in Uttar Pradesh, Uttarakhand, Karnataka, Goa, Himachal Pradesh and Gujarat in the next two years.

Everyone knows that the second wave of the pandemic has dented the image of the Central government and raised questions about decisions and delivery. There is talk in Delhi that Modi may undertake a massive Cabinet reshuffle, bringing new faces to improve the performance of many ministries. Those ministers not seen as very efficient may be shifted out to do party work. There is speculation as to who will be rewarded and who will be punished. There’s no doubt that Modi is not very happy with the work of some ministers and officials.

Already, the BJP has realised that things will have to be greatly improved in UP, where elections are only nine months away. Yogi Adityanath may still be popular as chief minister but there is a disconnect between him and his ministers, some of whom are not happy with his style of functioning.
In Uttarakhand, there was a change of chief minister--but the results do not appear to be different.

It is the situation in Gujarat, where the pandemic has exposed the weakness of the administration, that begs a lot of attention. It also calls for introspection by the BJP. Maybe, Chief Minister Vijay Rupani and other ministers are doing their utmost to overcome the crisis. But there is an impression that the quality of administration has gone down over the years.

There is talk that Rupani may be also feeling limited by the necessity of taking directions from his seniors in Delhi and other BJP leaders are not able to coordinate with him very well on all matters. Once, Gujarat was famous for its efficient bureaucracy, which took care of everything -- even if politics was topsy turvy. Today, the bureaucracy is looking up to the political leadership.

Modi's 'Gujarat Model'
Under Modi, the system was fine-tuned to focus on delivery. That’s why the ‘Gujarat Model’ was talked about in Delhi and other states. Modi won a big mandate in 2014 because of this reason. Ever since Modi shifted to Delhi as PM in 2014, Gujarat has been missing the quality of governance seen in his times. There are also other political fault lines for the BJP.

Firstly, the state govt and state unit of the BJP must work in unison. We are told that the state BJP unit and those heading the government are not even on talking terms. Secondly, old caste-related problems and issues involving the Patidars and other backward communities, tribals and Dalits and other groups must be addressed more effectively.

Yes, the latest NITI Aayog’s sustainable development goal (SDG) index has had good news for Gujarat. It tracks the progress of all states and UTs on a set of 62 national indicators. However, Gujarat continues to be among the poorest performing on the ‘zero hunger parameter’, which deals with nutrition-related indicators, and gender equality. The state also figures in the middle category in terms of quality education, decent work and economic growth, reduced inequality, responsible consumption and production and life on land.

We cannot ignore the fact that there are many political and economic issues that can no longer be pushed under the carpet if the BJP has to emerge victorious in the 2022 assembly elections. We know Union Home Minister Amit Shah is guiding the workings of the state government through Rupani.

But the present times call for more interventions. Modi has to take a call now, as to who will be the face of Gujarat’s further progress? The feeling of things being allowed to drift is not good. It has to be addressed sooner, rather than later. Because the important question of who will be ‘Gujarat-no-Nath’ is coming to everyone's mind. We are reminded of the legendary Kanhaiyalal Maneklal Munshi and his great work, ‘Gujarat-no-Nath’.

The parallels to the situation in his novel and today are not difficult to find. It was Munshi (1887–1971) who coined the term ‘asmita’ for Gujarat – a concept much known, circulated and hotly debated in our politics since the advent of Modi to the top. We can be sure that Modi and leaders like Amit Shah are aware of the ‘asmita’ in Gujarat today and what needs to be done. The time to redress the issues plaguing governance is now.

It is in this context one also asks the question: Can Arvind Kejriwal’s Aam Aadmi Party (AAP) gain in Gujarat? As they say, there cannot be a vacuum in politics. With the Congress still not in a position to play an effective alternative to the BJP in Gujarat, is seeing a lot of opportunities for its growth.

Last Monday, AAP leader and Delhi CM Arvind Kejriwal inaugurated the new state office of AAP Gujarat on Ashram Road in Ahmedabad. This is Kejriwal’s second visit to Gujarat after his party won 27 of the 120 seats in the Surat Municipal Corporation (SMC) elections in 2021, eating into the share of the Congress, which has remained the main opposition party in the state. Kejriwal has discussed a plan for the 2022 assembly elections in Gujarat. He wants to make it a three-way contest between the BJP, Congress and AAP.

We know that Gujarat has historically been a two-party state, where power oscillated between the Congress and the BJP, which has been in power since 1999. Apart from the two parties, the state assembly now has two MLAs from the Bharatiya Tribal Party (BTP), one MLA from Nationalist Congress Party (NCP) and Independent MLA Jignesh Mevani.

The BJP has managed to get elected to power again and again -- because of the personality of Modi and his track record as CM from 2001 to 2013-14. Kejriwal very well knows that the people of Gujarat cannot give up support to Modi so easily. The PM still enjoys a huge emotional connection with the state. But the situation is ripe for the AAP to capture, at least the space of the opposition.

So far, the Congress has been unable to revitalise itself. With the demise of senior leader Ahmed Patel, there is nobody of his stature to pay attention to the state of affairs of the party in Gujarat.

Also, the AAP has reached a point in its rise that it has to prove its strength beyond Delhi. Gujarat, after Punjab, holds that opportunity. Gujarat is now ready for transformation, according to Kejriwal. But AAP’s main difficulty is that it needs a prominent face like Kejriwal to lead the election campaign in Gujarat. The face has to be of someone who is acceptable to the people of Gujarat. It is significant that, Kejriwal is involving popular faces like former TV anchor Isudan Gadvi for AAP’s expansion plans.

Kejriwal’s visit to Gujarat was timed a day after two estranged sects of the powerful Patidar (Patel) community -- Kadva Patel and Leuva Patel -- came on a common platform to praise the AAP. This was during an event in Rajkot’s Kagwad. Patidar leader Naresh Patel, who has appreciated the “work culture of the AAP”, has openly said their aim is to push for a Patel as chief minister contender in Gujarat.

That brings us to the question: Will Kejriwal be tempted to promise a Patel leader as future CM? Everyone knows that Patels, who form 14 per cent of the electorate, have been alienated from the BJP set-up for some time.
Kejriwal knows very well that the BJP is having problems with the Patel leaders because it has been focusing attention on a coalition of non-Patel groups. The Patels have been a strong vote bank of the BJP. But their demand for reservation disturbed the relationship with the BJP. The quota agitation in 2015, which was led by Hardik Patel, helped the Congress immensely in the 2017 assembly polls. Today, those leaders are unhappy with the Congress.

So, AAP sees a huge opening. If the Patels could be persuaded to dump the BJP totally and also the Congress, the politics in the state may see a turn.