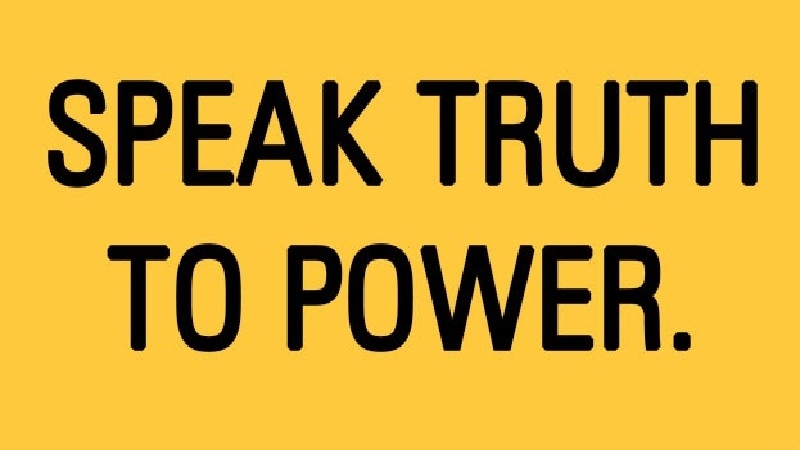 “Speaking truth to power”has come to be a phrase identified with all those who speak up in the face of authoritarian establishments or power brokers who tolerate no dissidence. Though the phrase “speaking truth to power” has existed for quite a while, it gained relatively more currency through the efforts of the Quakers in the United States during the mid-1950s. It was a call for the United States of America to stand firm against fascism, and as a phrase it is expected to disturb the right wingers in a political system.

Some of those who were powerful proponents and practitioners of standing up and speaking truth to power are Nelson Mandela, the Dalai Lama, and Archbishop Desmond Tutu. In different parts of the world, at various stages of the evolution of humanity and in various ways and to different degrees, voices have risen and spoken up against injustice, and for the protection and preservation of democratic values. India is a democratic nation and has its fair share of those who speak truth to power at various stages and levels in our society.

In recent times, however, with the rise of Hindutva forces following the coming to power of the BJP in 2014, there has been some change. We have academic and intellectual voices that, at times, do speak truth to power and take a stand against oppression and exploitation of the deprived sections. But we also have witnessed in recent times how those who were on the margins of the Right, or were the so-called Centrists or Liberals, have acquiesced quietly with the State and its attempts to stifle voices not on its side.

Every time our intellectuals sit quiet or choose not to speak, let alone protest, closet Hindutvaites get a boost and they have been getting this boost post-2014. Thus, silence against the attacks on our democratic traditions has meant more attacks and more voices in support of those attacks.

Ideally, there should have been an outcry, unrest, and an uprising from the intellectuals and civil society consequent to the arrest and incarceration (later converted to house arrest) of the five activists (Varavara Rao, Gautam Navlakha, Sudha Bharadwaj, Vernon Gonsalves and Arun Ferreira) courtesy the Maharashtra government’s law and order machinery. But for the bold action and petition filed by Professor Romila Thapar (and four others) and some whimper in certain quarters, the event has just passed by the Indian intellectuals in the portals of our universities and academic institutions.

The five activists have been charged with sedition. We are not living in a period of Emergency nor are we subjected to any restrictions as regards our speech or action. Yet, we have chosen to adopt an ostrich-like attitude. The battle in the courts goes on but in the battle of voices of democracy, we have seen low key action and a lot of silence from our intellectuals, particularly our academics.

The actor and Congress party social media leader Divya Spandana, too, has been charged with sedition for her tweet involving the prime minister. Granted her tweet was in bad taste. But does it qualify as sedition? Does the Indian state understand what sedition means? Though a war is a bloody and no-holds-barred kind of event, yet there is some sanity via international law that holds what is known as disproportionate use of force. Use of sedition law in India is a classic case of disproportionate and incorrect use of the force of the law.

It is indeed sad that speaking truth to power is not considered by many more today to be the sine qua non of the civil society in general, or of the intellectuals in particular, in a what we still assume to be a democratic set up that we live in. Without speaking truth to power, power will lose sight of the truth. The causality of this is not the government of the day but the nation as we know it.

Why this silence in the face of an overwhelming government? How can we support, nurture and encourage independent voices who could stand on any aide of the political spectrum, but are unified in their support of our democratic traditions, our respect for diversity, inclusiveness and free speech? After all, it was the curtailment of free speech and the enforcement of a police Raj of sorts during the Emergency that gave rise to some of the leaders who went on to have their first taste of power and later went on to build the BJP and take power, Narendra Modi being the only one who followed in those footsteps and did not build or fight during those early days.

The only way to guard against suppression of a free voice is to have educational institutions where the spirit of inquiry, challenge, debate and counter questioning is encouraged. The place we are in tells us that we are doing not enough of that in our institutions. If academic leaders don’t have a voice, what voice can the future generations have, and what voice can then our nation have in the world? It should be okay to speak for or against Right or Left politics. But it should not be okay to allow the killing of dissent in a systematic process. That surely is anti-national activity of the worst kind because it kills the soul of India and renders it a MeToo version of a host of other failed democracies.