HomeAnalysisReligion and the quest for peace

Religion and the quest for peace

This year marks the 500th year of the Reformation in Christianity. It was a major change that caused a split within the ranks of Christianity. The origins lie in the ninety-five theses that a priest named Martin Luther nailed to the church doors. Each of them asked the Papal authorities to explain the divergences between what the priests spoke of and what the Bible itself said.

Almost coincidentally, the moveable type printing press of John Gutenberg was introduced to the world.  The first book to be printed was the Bible.  Luther’s charges gained currency, and the church split.

To date, one of the basic differences between the Catholic Church and the Protestant Church is the latter’s belief that anyone who has been baptised has a direct connect with God, and does not need the intercession of a priest. The highest authority for Protestants is the word of Jesus as found in the Bible, not the Papal structure of the Catholic church.

The tensions between Catholics and Protestants are most mort visible in Germany (and in the UK where Catholic Ireland insists of being a separate entity from the rest of Anglican Protestant UK).

It is therefore heartening to see the German government actually coming out in October 2017 with a publication titled “Working for Peace – How religions can contribute to resolving conflicts” (https://www.deutschland.de/en/500-years-of-reformation). Its contents are based on the first Conference on the Responsibility of Religions for Peace, organised by the Federal Office, Germany. According to the book, “the discussions with the representatives of different religions are therefore soon to be continued and the insights gained will flow into political work”.

The discussions have a lesson for India.  India has a religious majority community that should be a lot more confident about itself. Instead, it sometimes becomes shrill and intolerant. It should actually be holding out a hand for furthering peace on the sub-continent.  Germany, on the other has only 27% of its population which is Protestant, and 29% which is Catholic.

Together, they account for 46% of the population (see chart). That should make Germans edgy, but it has been contained.

One seldom hears of religious strife in Germany, while it is always round the corner in India. Germany has opted for dialogue (https://www.deutschland.de/en/topic/life/society-integration/500th-anniversary-of-the-reformation-in-germany-a-belief-in-dialogue). India on the other hand tends to justify vigilantism. 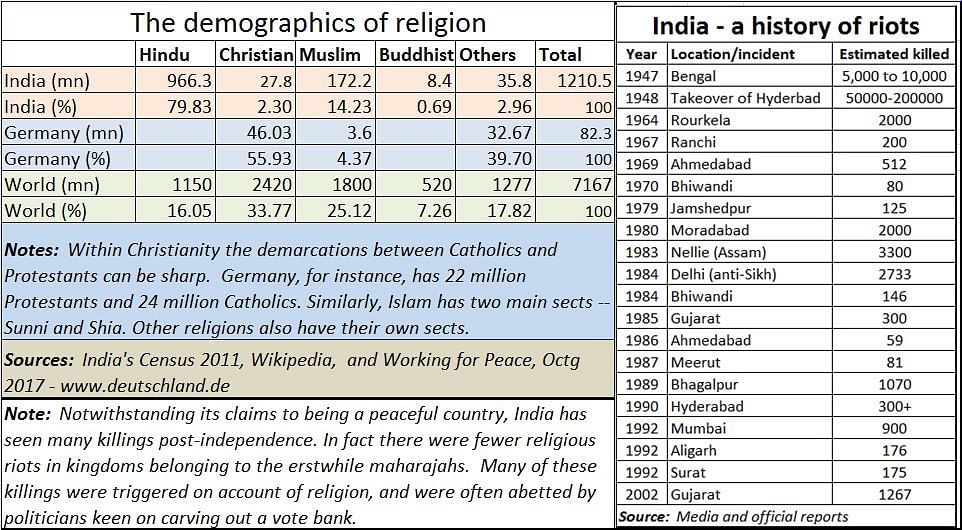 The reason why Indians have not been able to foster harmony among religions is on account of many factors:

Once out, he cautioned, it would be difficult to put it back. The consequences are there for everyone to see.  Yet, unheedful of the lessons of history, the government continues to permit more outpouring on to the streets.  This does not bode well for peace.

The German initiative must be lauded. It must find reflection in India as well. If there was one kind of reformation movement in Germany in the 16th century, India needs a second type of reformation today – a more sagacious approach towards religion and civil courtesies.