Political discourse in our country is as full of hate as Delhi’s air is of aerosols, writes Anil Singh

Look at the bigotry and hatred which has led to Tripura, Lakhimpur Kheri, the killings of rationalists and dissenters from Narendra Dabholkar to Gauri Lankesh
Anil Singh 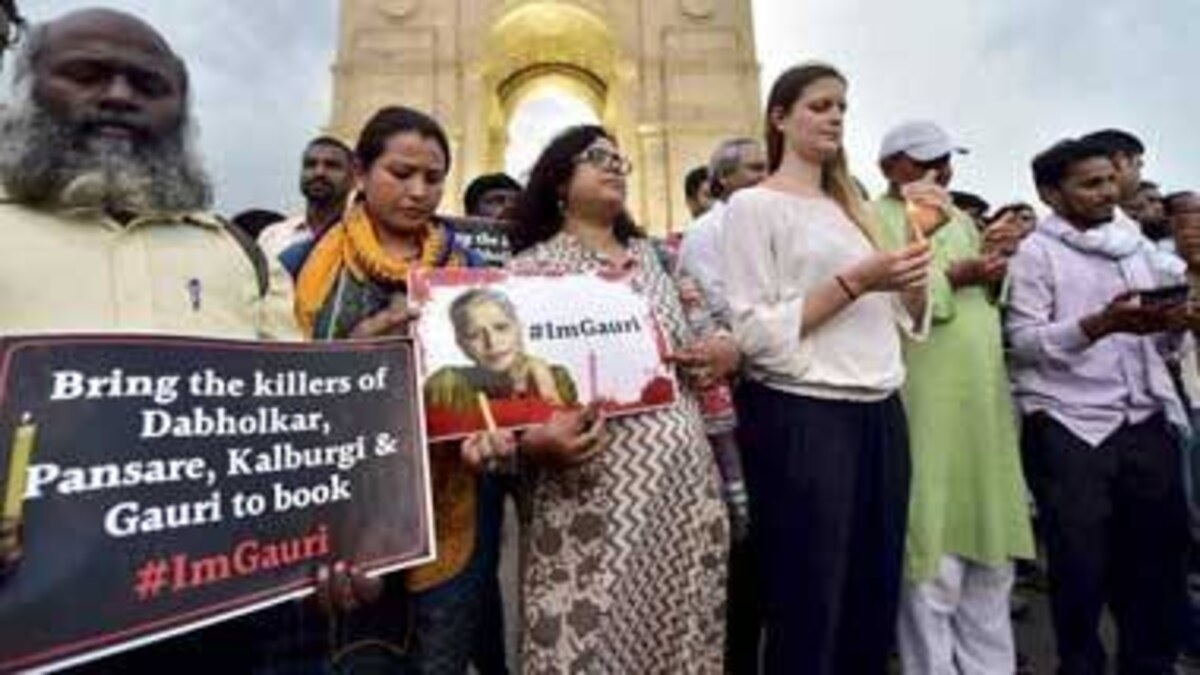 An IITian was arrested for threatening to rape Virat Kohli’s daughter, a repeat of last year’s case involving Dhoni for which a 16-year-old boy from Kutch was arrested. Since the usual culprits – Pakistan, ‘Tukde-tukde’ gang, urban Naxals – have been ruled out, this calls for some soul-searching. But before we start blaming our secular education system or Bollywood’s corrupting influence or some such soft target, we must look at the political discourse in our country, which is as full of hate as Delhi’s air is of aerosols.

Look at the unseemly fight between Maharashtra minister Nawab Malik and the leader of the opposition Devendra Fadnavis. Look at Kangana Ranaut’s outbursts. Look at how the liberal left is routinely abused as ‘sickulars’, ‘libtards’ and even ‘librandus’ in social media. Anyone questioning the government is dubbed an anti-national and told by the ‘hatriots’ to go to Pakistan.

Even Virat once used this logic to berate an Indian cricket enthusiast who told him that he (Virat) was overrated and that he preferred to watch English and Australian batsmen. No one pulled up Virat for it. And there’s only mild criticism of the Indian captain’s liberal use of expletives to pump himself up on the field. What kind of role model does this make him?

Amit Shah’s belligerence goes to the extent of likening opposition parties trying to form a coalition against the BJP to “snakes, mongoose, dogs and cats... which can be seen on the same tree during floods”. This is the same man who undertook an oath not to use abusive or derogatory language when censured by the Election Commission in 2014 for inflammatory speeches. His leader is a past master at it, having used terms such as ‘Pachaas crore ki girlfriend’ while referring to Shashi Tharoor’s wife and mocking Mamata Banerjee in an undignified manner at election rallies.

The opposition too is guilty of calling the PM a ‘chaiwalla’, ‘neech’, ‘Gangu teli’, ‘gandi naalika keeda’…but being the PM, the onus to lead by example is on Modi. Hate speeches lower the political discourse even further. The PM’s ‘andolan jeevi’ spiel at the height of the farm agitation came close to being one. Addressing the Rajya Sabha, he said that India must protect itself from this parasitic species which lives off agitations.

The implication is that those who support various people’s movements – from citizenship rights to workers’ struggles to Dalit agitations to human rights – are conspirators harming the nation. He reinforced the familiar pseudo-patriotic appeal saying that we have to protect ourselves from the new FDI which is Foreign Destructive Ideology (alluding to singer Rihanna and teenage climate activist Greta Thunberg’s tweets supporting the farmers’ agitation). Read with the ‘andolan jeevi’ slur, this clearly was a dog whistle.

Look at the bigotry and hatred which has led to Tripura, Lakhimpur Kheri, the killings of rationalists and dissenters from Dabholkar to Gauri Lankesh. The volume of hate messages which ‘bhakts’ circulate and which Facebook ignores is stupendous. They don’t even spare Gandhi and Nehru, spreading all kinds of vile stories about them.

Academics who refuse to toe the line aren’t spared either. Gandhian scholar Rajni Bakshi’s piece in the Indian Express on October 1 last year dealt with Gandhi transcending hurt and resentment; channeling the energy into a higher purpose. She was trolled for it. Except for the odd appreciative letter, the response was an avalanche of abuse.

Rape threats to cricketers make headline news and lead to arrests but anti-establishment women journalists routinely get rape threats. Barkha Dutt and eight other journalists were accused of being part of an ‘anti-India conspiracy’ in a YouTube video that also called for their ‘hanging’. The online platform took down the video but not before it had reached half-a-million viewers. Exemplary action should have been taken in this case but it was allowed to pass. As was the ‘Goli maaro saalon ko’ speech of the man who went on to become a Union minister. Yet, people take offence if our religious bigots are compared with the Taliban.

Politicians too, not spared

Politicians are not exempt from rape threats. In 2018, such threats were made via Twitter to the 10-year-old daughter of politician Priyanka Chaturvedi. Nor is it a purely Indian affliction. According to a 2016 study of lawmakers from 39 countries by the Inter-Parliamentary Union, 44.4 per cent of elected female representatives had been threatened with rape or violence while in office, and 65.5 per cent reported that they had received ‘humiliating remarks of a sexual or sexist nature’ either ‘several times’ or ‘often’.

We are a country that sends gangsters to Parliament and gagsters to prison. And if the stand-up comic is a woman, a rape threat is inevitable, as Agrima Joshi realised. An old video wherein she quoted jokes from a popular forum about the proposed Chhatrapati Shivaji Maharaj statue in the Arabian Sea was enough for YouTuber Shubham Mishra to upload an abusive, threatening video against her. However, this is one case in which the police acted promptly, booking Mishra under Indian Penal Code sections 294, 504, 506, 509 and Sec 67 of the IT Act. Mishra presumed he would enjoy the same immunity as the ‘bhakts’.

One can only imagine the effect this new low in political morality has on impressionable minds. “I know that it is wrong to utter such words in public,” the PM has said. “Children studying in Class 10 and 12 hear these words. These children should not hear or learn such words.” Children need and want to be told right from wrong and learn responsibility and the consequences of their actions.

Psychiatrists say our children who are supposed to be handheld while they explore their world are left to face the adult world guided not by parents and teachers, but by the social media, resulting in ill-founded relationships, a crass understanding of sexuality, reality mired by drugs and a digital world which is cold and emotionally hollow and in which it is easy to mistake fake news as news.

But what example can parents set when they themselves are adrift in the wave of ‘hatriotism’ sweeping the country?

The writer is an independent journalist based in Mumbai. He has reported on civil society, law enforcement, environment and urban development with a pronounced anti-establishment stance for more than three decades and has been associated with national publications such as The Times of India, The Indian Post and The Free Press Journal. He tweets @anilsingh703