HomeAnalysisPolicy watch: What the FM did not announce

On June 28, 2021, the finance minister (FM), who once wagged her finger at every dissenting journalists (and bankers), announced a slew of measures to the tune of Rs.6.29 lakh crore.Most of them were in the form of credit guarantees to various sectors. Which she said would revive the economy. But there was an absence of any demand stimulation measures.

That could cause a fiscal slippage of Rs.1.97 lakh crore on a conservative basis, or Rs.2.3 lakh crore in case stress conditions prevail in the economy. 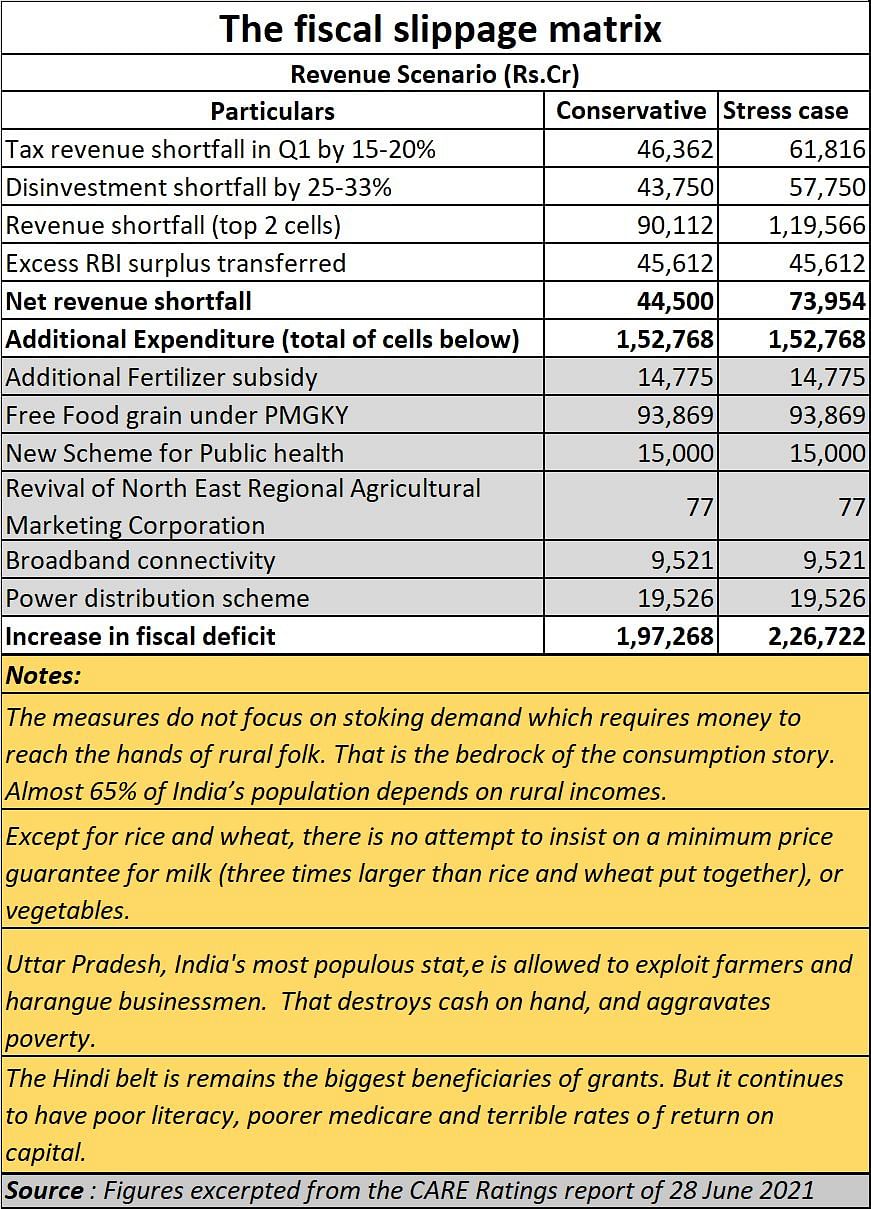 That could stoke inflation, because the expenditure is not matched by a rise in production and consumption. The FM’s proposals seek to boost supply, but do not appear to have considered demand generation at all.

That could explain why, after the announcements were made on that day as well as on the day after, the markets remained unenthused. Most critics had only one thing to say – credit guarantees are good for an economy that is still ticking away at a healthy pace. But they are no substitute for an economy where demand has collapsed.

Already the indications are bad. PMI has begun to drop alarmingly. While earlier it was only with respect to the services sector, it has now affected manufacturing as well (see chart). The desperate need, therefore, is to revive demand, not supply. If there is demand, supply will automatically step in. But demand is dependent on cash. And that is precisely what the markets do not have. For the last seven years, the government has introduced policies that have actually sucked cash out of rural communities.

Doles and grants are fine. But they erode self-respect and sap the ability to generate money profitably. More importantly, all doles and grants eventually depend on exchequer spending. That is okay when the treasuries have money coming in. But with tax collections becoming weaker than before, and the deficit growing larger, the scope for doles and grants has also shrunk, just like the economy.

If the FM has the persuasive skills, political savvy and vision, she should get the government to first ensure that each farmer gets a minimum price support for milk. Already, the farmers are in a belligerent mood, as the tweet from farmer leader Rakesh Tikait suggests.

Since milk is a daily income generator, and an existing working model has been in place for over four decades (NDDB and Amul) it would be the easiest to begin with. And there are three good reasons for doing this. three reasons. First, the largest producer of milk is Uttar Pradesh (UP). But it pays the lowest prices of milk to farmers. By promulgating a law that each farmer would get a minimum of Rs.26 a litre (subject to the fat content norms for determining price) each farmer would have additional cash, almost every day. The additional cash of Rs.6-8 per litre per day (for 300 days a year) will add to the purchasing clout of the farmer.

Do the same for vegetables. Farmers get barely 10% of the market price for vegetables. Unfortunately, the three controversial farm legislations seek to protect only rice, wheat, and other grains. Not vegetables, or other agri-produce. UP is the country’s largest horticulture producer, and one of its worst exploiters. Ensuring the farmer a better price will bring cash into the rural sector, which in turn boosts demand. Since 65% of the population survives on rural incomes, that will create the surge of demand the country desperately needs.

Of course, that would also mean that the clout of middlemen would diminish. That is not good news for a political system in states like UP where these middlemen also act as musclemen to drive people to vote for specified people. Now the FM and the prime minister must decide between politics and the country.

Banks and the taxpayer

One of the biggest casualties is the banking sector. This is despite the assurances from the Reserve Bank of India that this sector is weathering the second wave of the pandemic remarkably well.

But look at the telltale signs, which point to the opposite. Gross NPAs have continued to surge. The RBI’s Financial Stability Report (FSR) shows that gross non-performing assets (GNPAs) of banks could rise to 9.8 percent by March 2022 under a baseline scenario, from 7.48 percent in March 2021.

The haircuts suffered by banks during the past few months in some of the most nauseating settlements do not lend much comfort either.

The government’s unwillingness to insulate regulators from being on bank boards is likely to continue contaminating the central bank’s supervisory role. It could even politicise the bank regulator.

And the biggest danger is likely to come from a porous structure when it comes to loans and entitlements for the needy. The Aadhaar system has resulted in many bogus cards (see chart below), which could be used for fraudulent drawals from the exchequer by way of direct benefit transfer (DBT).Bogus Aadhaar cards could also benefit dummy voting – watch how most of the oversupply of Aadhaar cards has been in the +18-years-of-age category. But the financial leakage could drain the treasury even further.In fact, that could be one reason why the FM did not allocate more funds to doles and grants this time. 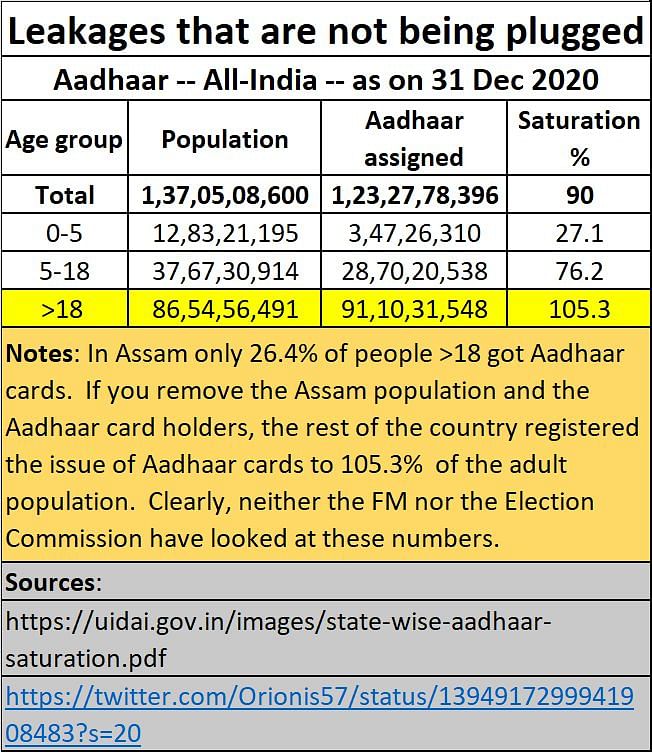 This money will not help in stoking demand. Instead, it will get translated into political funds, and strengthen an already exploitative structure. Do bear in mind, that the first wave of the pandemic has seen the erosion of India’s middle class (http://www.asiaconverge.com/2021/04/indiaslips-on-asian-leadership/), and has consolidated the hold of the upper-income segments. This does not bode well for economic growth.

Add to this the possible misuse of identities of dead persons (who have not even been registered as being dead). Even if a quarter of these identities are misused for illegally claiming DBT funds, the drain on the exchequer will be huge (http://www.asiaconverge.com/2021/06/missing-dead-series/). Neither the finance ministry, or the Election Commission have woken up to the danger that this poses to both the country’s financial underpinnings and even to democracy.

Meanwhile, almost all the core sectors of the economy are hemorrhaging (see chart below). And yet, if one looks at corporate results, they seem to suggest that all is fine. But examine the results closely, and you realise that besides trying to manage tighter inventories, many have cut wages – either through retrenchments, or through renegotiation of wages (https://www.livemint.com/news/india/how-india-inc-hobbled-through-2020-11625154446735.html). This further reduces purchasing power. And that in turn reduces demand for products and adds pressure to the downward spiral slide of the economy. Consequently, we have a situation with climbing prices and lowered interest rates on deposits. That, in turn, causes money in banks to lose value, on account of a negative real interest rate. That has caused many people in the middle-income segments to panic, They have begun seeking safer havens to park their money. Some have chosen stocks in an already overheated market. It is too early to say whether they will regret this decision, or whether they will benefit.

Thus, cash in people’s hands is a desperate need. Pity the FM was silent about it. But the sooner it acts -- the easiest route is to ensure better prices for milk and vegetables right away – the better. Else the Indian economy could be headed for worse times.

Over the medium term, the government needs to make the investment climate a lot friendlier – and that includes recourse to speedy dispute redressal through international arbitration. The best way out is to promote coastal economic zones (CEZs). But the government appears to be dragging its feet on this issue as well. This will allow for the creation of better paid jobs in large numbers and reviving India. At present, even the weak investment climate appears to be getting weaker.

This is something the FM will have to push for, with all the skills at her disposal. But that depends partly on the FM’s abilities, and the government’s political will.

Will both work towards reviving the economy?