HomeAnalysisPolicy watch: US-Russia-Ukraine will cause inflation to soar and currencies to tumble

Policy watch: US-Russia-Ukraine will cause inflation to soar and currencies to tumble

The US has ensured that services enjoy a higher valuation in the world – over agriculture and industry. That is understandable, because the US is the largest player when it comes to services.

Almost two months have transpired since the Ukraine-Russia-NATO-USA spat began. As mentioned in these columns, this was a war that the US wanted, and got. It has achieved most of its objectives.

It has compelled Germany to scrap its Nordsea2 gas pipeline arrangement with Russia. It has given Russia a bloody nose. It has made many countries on the edge of Russia borders think more favourably about joining NATO.

However, the US has not been able to browbeat Russia. This is for several reasons.

First Russia is not as small as many think. It may be 11th in terms of GDP rankings in the world. But when Price Purchase Parity (PPP) is considered, it is the sixth largest in the world. The PPP route becomes more relevant in a world where the US $ is suddenly being a liability. Saudi Arabia, the largest oil exporter, has already decided to accept payment in other currencies, especially the CNY of China. So has the UAE, India too. China has always favoured this arrangement. Many countries in Europe have already agreed to pay for the gas they need from Russia in roubles.

But there are other reasons as well. The US has ensured that services enjoy a higher valuation in the world – over agriculture and industry. That is understandable, because the US is the largest player when it comes to services – see table. But if you water down the services valuations, the world may look a bit different. After all, finance and services were supposed to be ancillary activities supporting agriculture and industry.

Even if one does not go down this route of devaluing services, Russia is the third largest when it come to agriculture, and the fifth largest (larger than Germany) when it comes to industry. These could play a bigger role in the post Ukraine-Russia-USA war.

To understand why this transition may take place consider how almost all of Europe depends on Russian gas. This is one reason why many European countries have refused to go along with US efforts to sanction oil and gas from Russia. They believe that their own national interests come first, and rightly so. The shrillest critics of Russia are the UK and the US -- both do not depend on Russian oil. 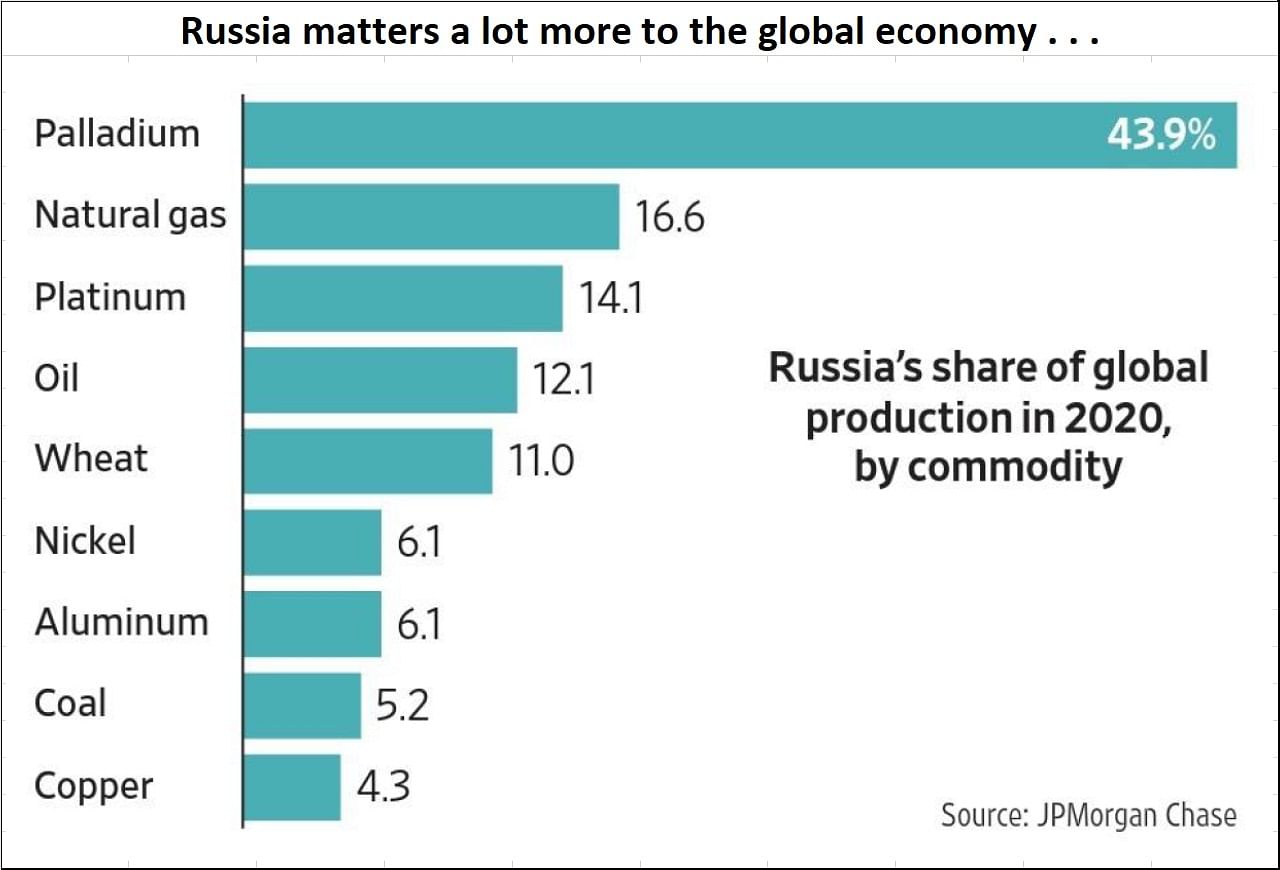 It is not surprising, therefore, that the prices of minerals (including oil and gas) have started flaring up. The US has succeeded in exporting inflation to the entire world, at a time when the US dollar itself is becoming weaker. That will cause other currency values to fall as well – except maybe for the rouble and the renminbi – because both Russia and China ahs systematically reduced their holding of US treasury bills. Moreover, they have insulated themselves from much of the contamination that could be caused by the dollar.

But don’t forget that the potential that the US has for mischief is tremendous. It remains the biggest spender on its military – larger than the rest of the world put together. Its ability to provoke conflict is immense. It can thus benefit from the sale of defence equipment on the one hand, and higher prices of oil on the other. Wars may weaken other countries, but could actually revitalize the US. That could be one reason why Russia has constantly reminded the world that the nuclear option is not of the table. If the US is hell-bent on creating trouble, Russia may be left with no other option. Thank God for Russia and China, without which the world would have seen a more arrogant and belligerent USA.

So, what are the options for the world? The dust has yet to settle. But some things are clear. There is a need to stay away from the disinformation that the US and the UK have unleashed upon the world (much of Europe too is to blame). They need to pay heed to the words of Dr. Tedros Adhanom Ghebreyesus , Director General, WHO, when he bluntly points out that while the world’s attention is focussed on saving Ukrainians, not a fraction of such attention is being given to Tigray, Yemen, Syria, Afghanistan and the rest. The US and the UK may scream about the need for Russia to be slapped with war crime charges, but remain stunningly silent about other more savage and devastating acts of depravity and violence against nations.

Clearly, two things become clear. Climate change will now go on the back burner. Nobody wants to save a world for a western world that ignores the cries of the rest of the world today. Many of the countries will be concerned about getting through these inflationary times – see what is happening to Sri Lanka and Pakistan. Soaring oil prices have made things worse for them. Expect more countries to look to China, India, and Russia for help, and not the US or even the UK, who are being seen as the bullyboys of the world.

But, most of all, be prepared for a more turbulent world that could erode wealth for most countries – including the US, in the coming decade.

The turbulence has just begun.