The government says it has no money for paying states their share of GST. There is money, provided it is not squandered.

Call it wooing a vote bank, or a mis-allocation of funds. This is the first of a series of articles aimed at showing how the history of plundering wealth from productive states has not stopped.

In the past there were the Nadir Shah and the Gaznis. Today you have successive governments plundering productive states.

For instance, do check up media reports of April 2020. They all talk of a Ganges that had finally become significantly cleaner and more beautiful than it had ever been in recent memory.

The reason was obvious to everyone. It was something that most experts had been saying all these years (https://www.indiatoday.in/india/story/coronavirus-lockdown-india-fresh-air-clean-rivers-1669726-2020-04-22). The pandemic and the lockdown forced the polluting units to shut down. That prevented effluent discharge. And that, in turn, left the Ganges cleaner, even without the efforts of the staff employed by the Namami Gange project (https://science.thewire.in/environment/ganga-river-lockdown-cleaner-namami-gange-sewage-treatment-ecological-flow/).

In the meantime, the government had already spent over Rs.8,000 crore (see table). Much of this was evidently spent in Uttar Pradesh (UP). This is because -- while state-wise outlays are not available – the work covers Kanpur, Allahabad/Prayagraj, Farrukhabad, Varanasi and Mathura; all in UP. 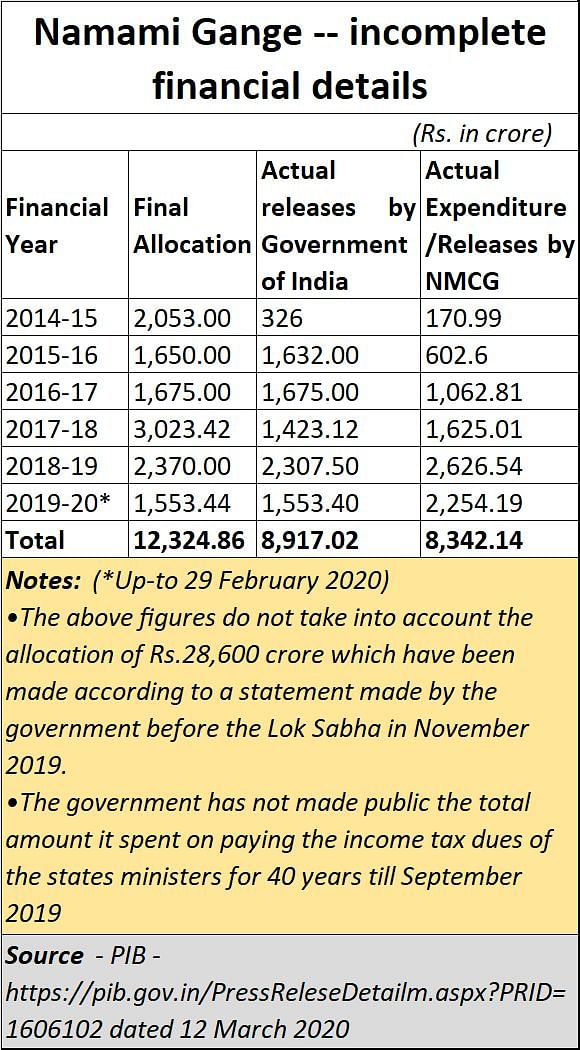 Of course, everybody wants a clean Ganga. But experts had privately laughed at the foolishness of Indian planners who opted to spend money on cleaning the river without first stanching the inflow of effluents. Ironically, what the government did not do, the pandemic succeeded in doing. It forced a shutdown of polluting (and other) units. Voila! The Ganges was clean again. But only if the UP government does not allow the units to restart and pollute the waters again.

So, was the Rs.8,00 crore spent only done to allow private players access to more money, without paying the cost of polluting public assets? Was the same game of privatisation of profits, and socialisation of losses being played out in UP? Could that explain why few policymakers want to enact and enforce the polluter-pays principle?

Worryingly, the actual amounts spent on UP and the Ganges could be several times larger. This is because the Press Information Bureau (PIB) which gave out the numbers in the chart alongside, did not consider the figures given out by the government before the Lok Sabha.

In November 2019, Minister for Jal Shakti, Gajendra Singh Shekhawat, informed the Lok Sabha that the Clean Ganga drive is a continuous process and the government has sanctioned 305 projects at an estimated cost of over Rs 28,600 crore under the plan (https://economictimes.indiatimes.com/news/politics-and-nation/govt-sanctions-305-projects-for-clean-ganga-mission-shekhawat/articleshow/72160157.cms?from=mdr). The PIB statement makes mention only of Rs.1,600 crore as the proposed allocation in the budget for the financial year 2020-21 (https://pib.gov.in/PressReleseDetailm.aspx?PRID=1606102).

And yet you have the government promising to spend crores of rupees more on Ayodhya (https://economictimes.indiatimes.com/news/politics-and-nation/centre-uttar-pradesh-plan-to-develop-city-as-a-big-tourist-centre/articleshow/77380428.cms) and on Mathura. Could this not be another case of pouring good money over bad?

Look at some other examples of UP’s profligacy and the silence on the part of the central government and the Supreme Court.

This state has exploited farmers – year after year -- by actually creating hindrances in the proliferation of milk cooperatives. This is despite the fact that UP is the largest milk producing state in India (http://www.asiaconverge.com/2017/01/uttar-pradesh-elections-budget-2017-and-milk-leather/). Yes, Verghese Kurien did manage to set up a couple of milk cooperatives in the state, but as soon as he demitted office, the cooperatives were scaled down.

When Narendra Modi became prime minister, in order to win Uttar Pradesh elections, he asked some of Gujarat’s cooperatives to set up milk processing centres on the outskirts of Delhi so that milk producers in UP could sell their milk directly to these processing centres at prices that were higher than what the middlemen were paying (http://www.asiaconverge.com/2017/02/nddb-and-dairy-farming-in-india/), But – despite the hopes and the hypes -- the milk cooperative movement has yet to take roots there. Clearly, the government (both at the state and centre) does not want to prevent politically protected private pockets from fleecing small farmer-milk-producers. The farmers can be sold dreams. Let the private pockets meanwhile fatten themselves and their political patrons. Had that been done, the doles from the centre – whether through loan waivers, or through rural support schemes in UP – would not have been required.

Consider yet another horrifying aberration. It was only in September 2019 that the Yogi Adityanath government, possibly under instructions from PM Modi, gave orders compelling UP ministers to pay their own income tax. As Suresh Khanna, state cabinet minister for parliamentary affairs and finance, stated at a press conference, “The state treasury will no longer pay the income tax of ministers and the provision in the Uttar Pradesh Ministers (Salaries, Allowances and Miscellaneous Provisions) Act, 1981, requiring the government to pay the income tax of the chief minister and the ministers, will be nullified.”

Income tax for individuals being paid by the state government? What could be more absurd? This was turning the taxation principle on its head! And it continued to be in force for 40 years, despite the ministers’ pay and allowances being increased by 40 times over a span of 38 years.

The state government, however, refuses to divulge the amount spent on paying income taxes for ministers in previous governments (https://www.hindustantimes.com/india-news/up-minister-says-government-will-stop-paying-income-taxes-of-ministers/story-K4e9MAqpKVhLPSInDOS7DL.html). What the government is telling taxpayers is this – “I can spend your money. But I don’t have to tell you how I spent it.”

Thus, for almost 40 years, all ministers in UP went off Scott free without paying taxes. And this money was paid by the rest of the tax paying people of India – once again mostly from Western and Southern part s of the country which contribute most to India’s revenues. As of now, there is no move to recover these ill-gotten gains from the ministers.

This raises the fundamental question. If ill-gotten gains can be sought to be recovered from the likes of Vijay Mallya, why not the UP ministers? Mallya had at least created wealth for India, and jobs. It would be interesting if there is a whitepaper on the wealth and jobs the ministers created against each rupee spent.

There are other questions that demand answers.

Should funds be allocated without demanding a return on investments?

Can one state be allowed to impoverish the rest of India – even if the state has the prime minister’s constituency?

Is there no method of enforcing accountability – like sending the finance secretary to prison for defrauding the national exchequer?

Should the Supreme Court not be asking these questions suo moto, rather than pursuing contempt of court cases to protect its own dignity?

Does the country’s financial integrity matter less than the dignity of the court?

When the political class abdicates its responsibility, and the bureaucracy becomes collusive with its political masters, the apex court was duty-bound to step in and prevent the loot of the country. That it has not done so is very disturbing. It points to the erosion of the Constitution of India itself, and frittering away every chance of India becoming an “atma nirbhar” nation.

The judiciary’s silence on this plunder casts the venerable judges in extremely poor light, as being willing to be collusive through its silence. The courts have preferred to mutely watch the country being plundered by the brazen recklessness and profligacy of just one state -- UP. Doesn’t this remind you of Nadir Shah or Gazni?

As a result, the cash generating states in Western and Southern India have been left with less money to spend on education and health services. Money for infrastructure which could have made India stronger was looted by one single state (there were others as well, but more on that later).

It is therefore necessary to look into some seamier details of how politicians and bureaucrats colluded to actually reward UP – and a couple of other states -- for profligacy. But more on that in another article.