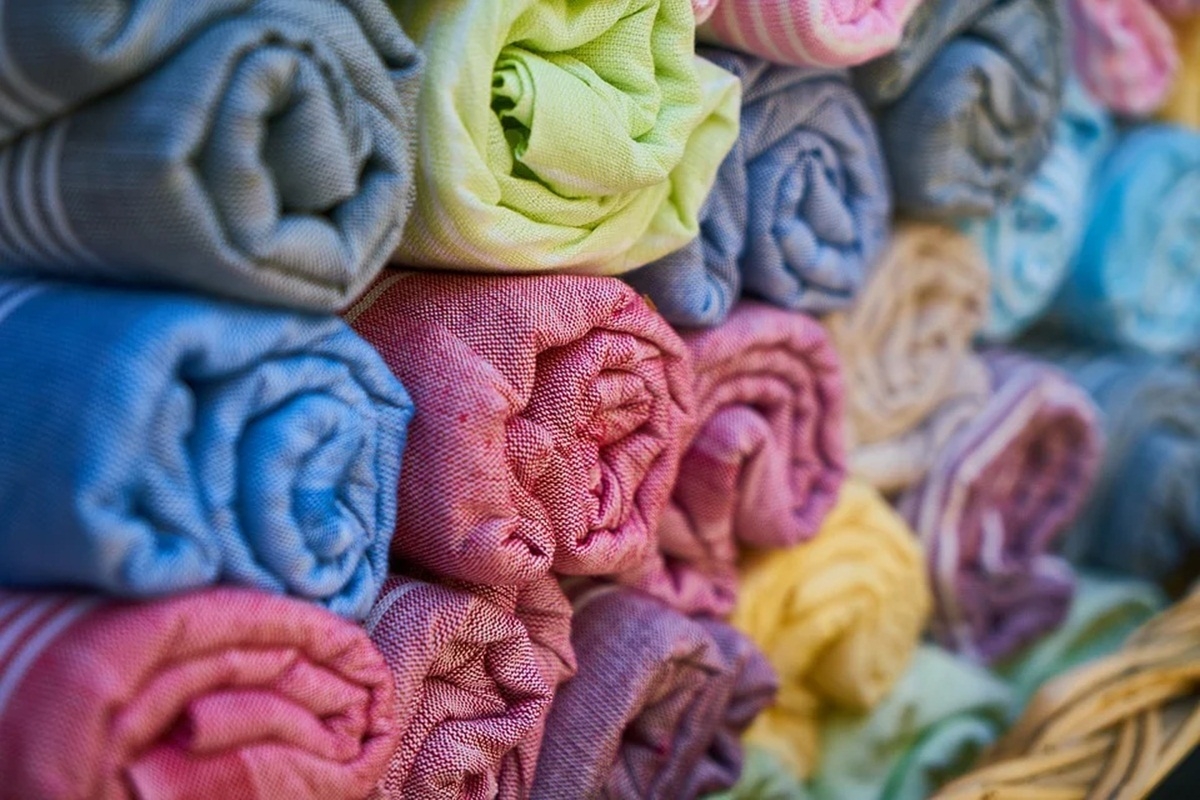 Some seventy years ago, if one had looked at India’s competitive strength, the highest marks would have gone to textiles and apparels. This was the very backbone for India’s economy. It has been so ever since David Sassoon discovered this when he set up 17 textile units in Mumbai and employed almost two thirds of the city’s labour.

The Gujaratis and the Parsis who came in almost immediately thereafter reinforced this strength.

India has several strengths that should have kept it in the forefront. It is the world’s largest producer of cotton and silk, and the second largest producer of man-made fibres (MMF). It has a huge skill base in people who have been working in the textiles sector for decades. It has a large domestic market which should have provided the country a platform for augmenting exports in a huge way. However, over the decades, its domestic market has grown, but its exports remained stunted.

Post-independence, more specifically, post 1960, India lost its way. Gradually, using the excuse that capital had to be rationed out, the bureaucracy thought that it could decide which sector to promote and which sector to hold back. Capital was scarce, ran the argument. It must be used carefully. And the babu increasingly held the key to industrial – even economic -- growth.

If you had visited the office of the textile commissioner in South Mumbai in those days, you would find the multistorey complex humming with activity, day after day. You needed this office to clear your upgradation of a loom even from handloom to powerloom. You had to get clearances from this office to import a loom or set up a new weaving unit. Senior officers had textile magnates coming over to their residences on weekends to learn of the best way to put forth a proposal.

When export limits were announced by importing countries, it was the babu who decided (sometimes in collusion with his political bosses) which industrialist should get how much of a quota for exports as well. Instead of letting the markets decide on who was the most cost-effective producer of yarn, fabric or even apparel, permissions to export were rationed out only to those who were favoured. The domestic market was thus stunted through licensing, and the export markets through quotas.

But things began changing from 2005. That was when the government abolished the quota regime. Suddenly, there was a huge opportunity to ship goods globally. This challenge was taken up by entrepreneurs. They established world-class facilities with state of art machinery. A lot of effort was placed to establish India in the global supply chain by running front-end marketing, setting up distribution, branding etc.

Soon, India began being reckoned among the big players in the world, especially in home textiles (bedspreads, pillow covers, towels, curtains, and the like). The old complaint of India not meeting the expectations of the global supply chain in terms of quality and technology began getting muted. It was as if—all along -- the government was the biggest contributor to propping up the inefficient and the ‘undesirables’ in the industry. 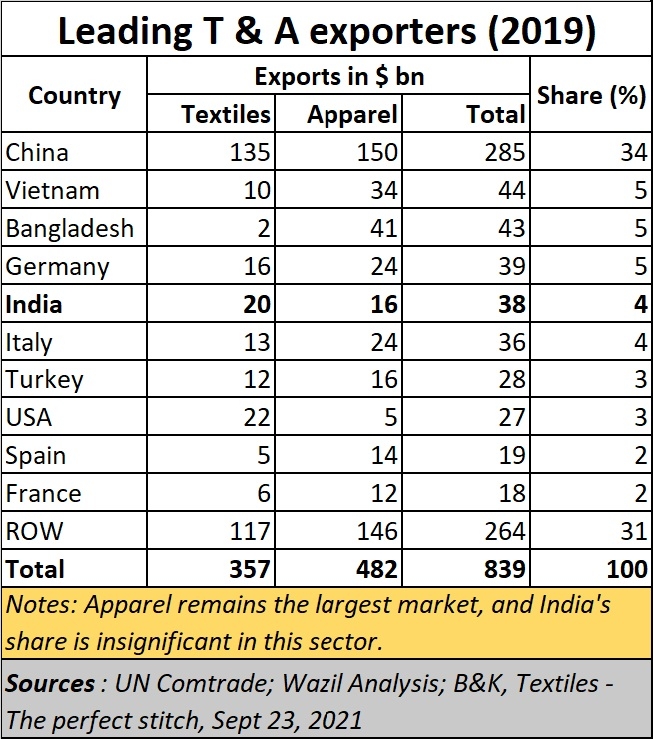 As a result, even though Covid 19 brought with it a host of challenges, this industry kept its head up. It was buoyed by (a) strong recovery in key export destinations and (b) a favourable export policy which did not micromanage operations.

Home textiles appeared most promising, as did yarn. Apparel holds out promise, but it looks like the going will continue to be a bit rough. Hitherto, it was the domestic market that has sustained this industry, especially where apparels were concerned. Apparel sales in the domestic market were at least four times larger than in export markets. It was only in home textiles that exports markets were larger than domestic sales – right since 2005 (see table).

Yet, there is no denying that the highest value addition lies in apparels. Unfortunately, while the garment manufacturers do well in domestic markets, they have not fared very well in international markets.

Much of it is because making garments are labour intensive, and India’s labour policies are not what the trade would like to be. As a result, India exports only around $16 billion worth apparels while countries like China export $150 billion. Even smaller countries like Vietnam ($34 bn), Bangladesh ($41 bn), Germany ($24 bn), and Italy ($24 bn) export more than India. That is a shame because the apparel export market is larger than all the rest of textiles put together.

There are other problems that plague this industry, especially apparel exports, but we shall discuss that later next week.

As an Edelweiss report explains, “India is a noteworthy alternative to China in terms of sustainability (China is getting flak globally over forced labour issue and Pakistan is facing backlash from the EU over abuse of blasphemy laws), and is gaining incremental demand from markets like the US and the EU.” But that could be a bit of wishful thinking. 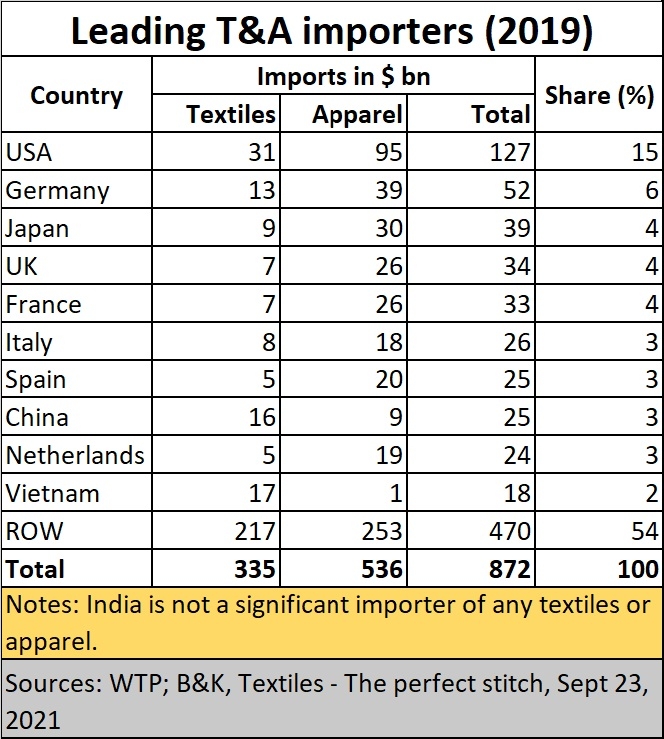 For instance, as the Edelweiss report points out, “Over the last two years, China has lost market share in every cotton category. In cotton made-ups, China’s lost share has been picked up by India (34-40% share) whereas in Cotton Apparels, Vietnam has been the major beneficiary. Also, resumption of mills and gradual recovery in domestic retail has further increased demand and kept yarn prices healthy.”

But look at India’s export figures over the years, and you will discover that India’s export earnings have remained relatively constant for the post few years since 2017. Moreover, made-ups account for a fraction of textile exports. So, a surge in this segment is not significant as far as the export basket is concerned. Overall, instead of increasing export earnings, they declined in 2019-20. Had India been able to capture global market share, even a 1% increase in global export markets for textiles and apparels (T&A) would have translated into $8 billion surge in India’s exports.

The largest importers of T&A are the US followed by Germany, Japan, UK, and France (in that order). But on the aggregate India’s export share is just 4% against 34% for China.

And while projections given by B&K in its report on Textiles appear to be very promising – it sees India’s T&A exports doubling by 2025-26 -- there are many reasons to be sceptical about such projections. Unless, of course, there is considerable rethink by the government in its approach to industry in general and to T&A in particular.

But that is a topic that shall be discussed next week in these columns.