Policy watch | Slums – I: There is big danger ahead -- pandemic and the possibility of mass extermination

This article is the first of a three-part series on slums, cities, and economic growth.
RN Bhaskar 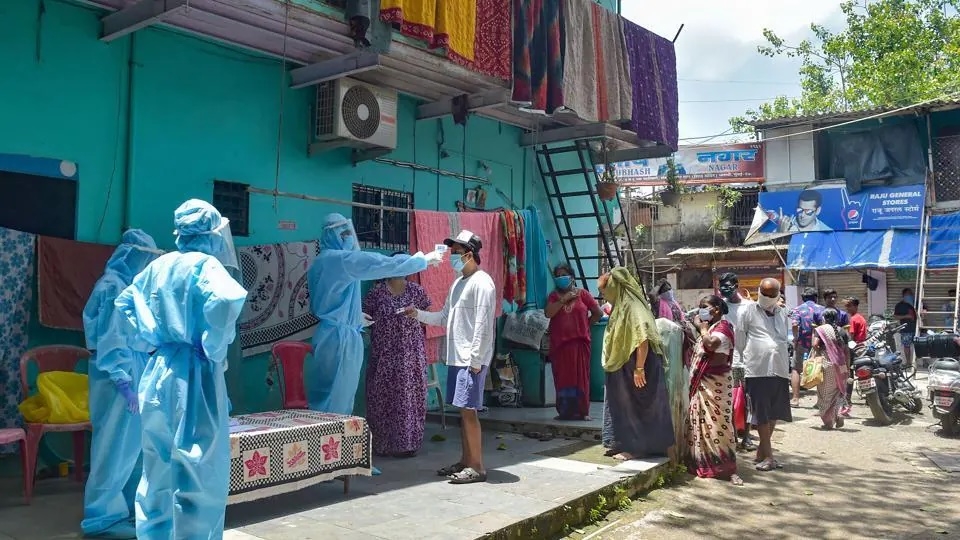 The clock’s ticking has become more ominous than ever before. The silent cries of the dying, and the muted screams of the already-dead have begun to haunt society. It is only a matter of time. 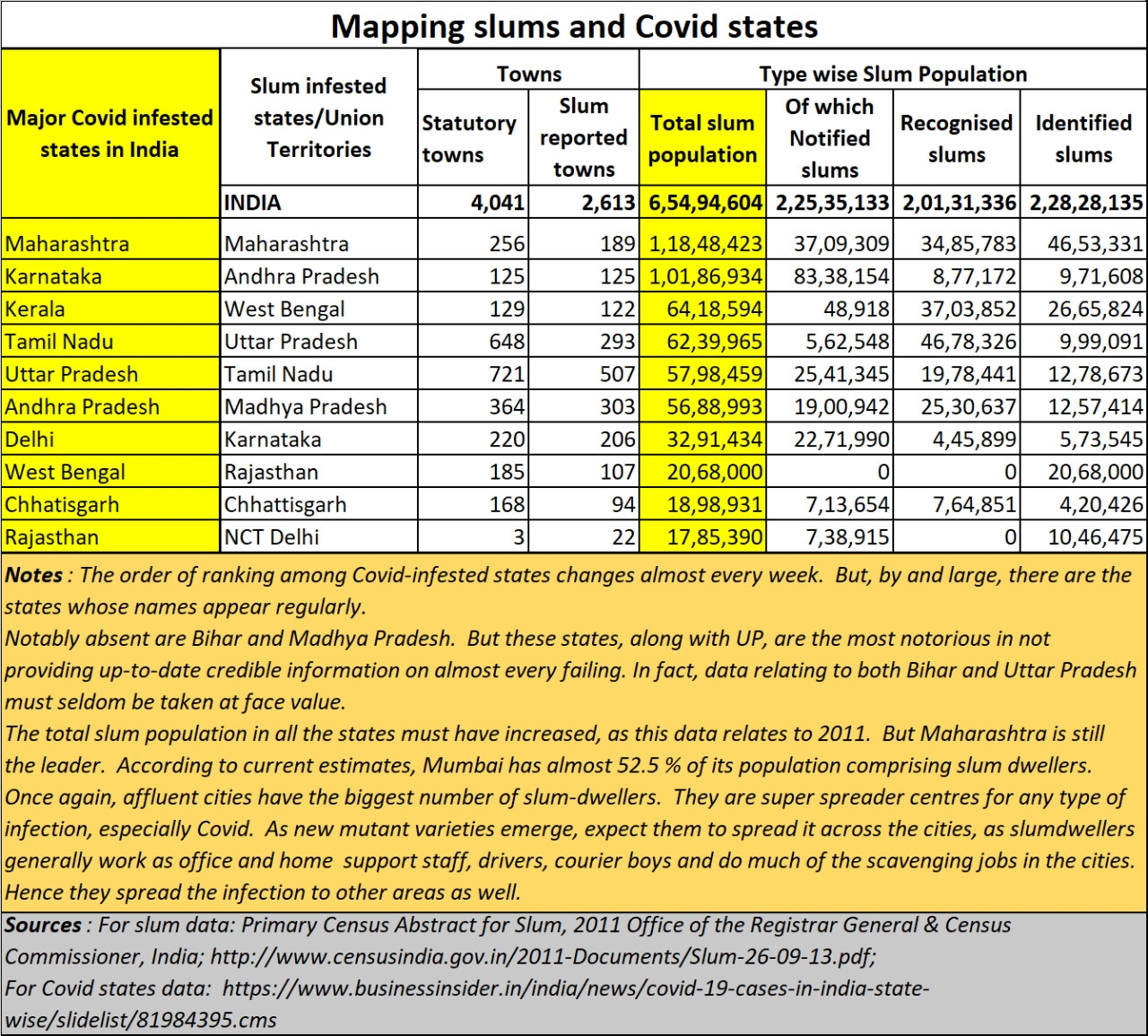 India in the hotspot

As climate change becomes more pronounced, and new types of insects emerge on the scene to cope with the changed climatic conditions, expect more viruses to emerge with greater rapidity than ever before. And the government may deny it till it goes red in the face, but reports that India’s Covid-related death toll had reached the 5 million mark, against the government figure of 426,754 (as on 6 August, 2021) are gaining credibility.

As Dr Mrutyunjay Mohapatra, Director General of Meteorology, India Meteorological Department (IMD) puts it, “The rapid rise in the number of extreme weather events, mostly induced by way of climate change, has underlined the need and importance of timely and accurate forecasts for a variety of weather phenomena.”

What he does not say, and what almost every virologist in the world is now aware of, is that with climate change and urbanisation will come the emergence of new species of viruses and bacteria. And the world will have to learn of new ways to live with them, and cope with them, even find cures. 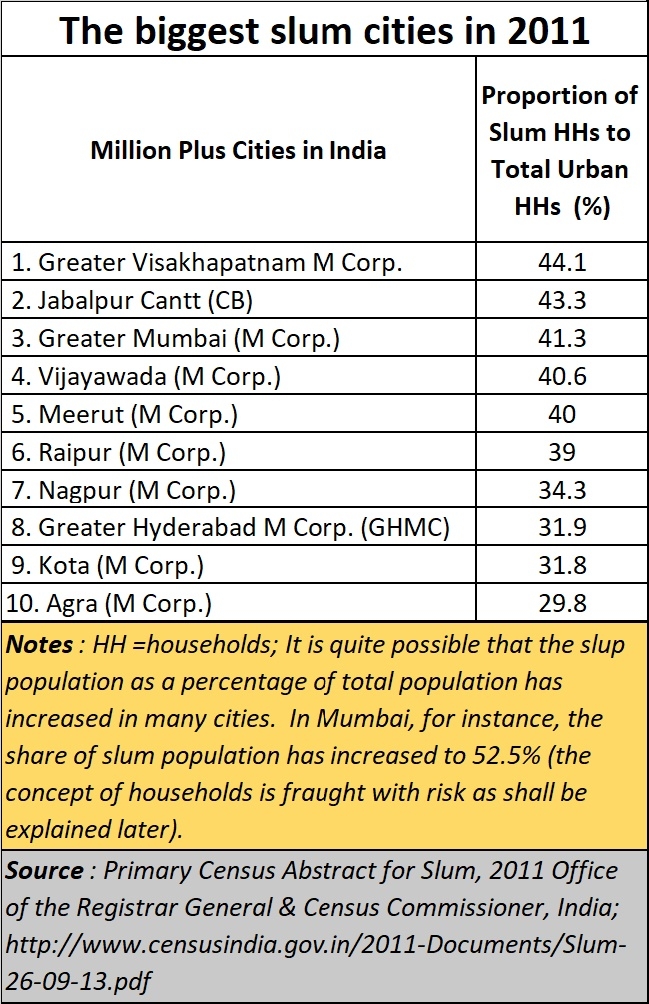 Yet there will be outliers like India. This country is both densely population on the one hand and has not found ways to make its people emerge out of poverty on the other. Poverty and population density combined provide fertile growth centres for viruses. Just look at the top ten cities where slums proliferate. And the ramifications of the crisis begin to become evident.

India will thus abet the rapid transformation and mutation of viruses. The Delta and Delta plus are just precursors to an emerging trend. Even the world may not be capable of dealing with them. The above table showing the correlationship between Covid and slums has been staring at us in the face.

The problem with slums

When you have a slum, you cannot have social distancing. And when you have around 30 persons to each toilet seat (which is what we have with the common toilets for slums in Mumbai), you are asking for a rapid spread of the disease. No amount of control will be effective for too long.

Sooner or later, these slum dwellers will have to go out to earn a living. Most of them are house-helps, office-assistants, drivers, cooks, or self-employed professionals like electricians. Each of them will visit several houses. They will need to travel in buses and trains, by monorail and metro-rail. Suddenly, the very means that ought to have become multipliers of wealth generation will become centres for super-spreading the epidemic.

Almost every bustling city in India has slums (Chandigarh is a remarkable exception).

And in each city, even the most rigorous restrictions won’t work for too long. The long arm of death will become busier than ever before in living memory.

Reining in politicians and the affluent

No matter what the state government or the central government may say, unless a solution is found to the menace of slums, India is preparing for an extermination of a significant percentage of its population. And this time, like during the first two waves, the death toll will not affect just the slum dwellers or migrant workers. It will affect the privileged who want house-helps, office-boys, servants, drivers, security-men, and the like. The casualty list won’t spare anyone.

Sound alarmist? Not really, Smell the coffee. Even the police and the municipal corporation are unwilling to deal with slums head-on. Let me give an example from the locality where I stay. Slum dwellers love to cycle and do acrobatics through our part of the colony. Mothers amble through our lanes because their own lanes are too stuffy and smelly. Most don’t practice social distancing or wearing masks, even on the roads. In the process, they infect the elderly in this part of a small colony in a small part of Mumbai.

Complain to the police, and privately they tell you that they dare not scold any of the slum people. Haul up a slum dweller and the chances are that the entire slum will land up at the police station to protest, thus endangering all the police officials. They also fear retaliation from the legislators because slum dwellers are their vote banks. Magnify these a hundred thousand times, and you will then begin to get a picture of the huge problem the entire country faces, especially from states which have large slum populations.

Don’t blame the slum dwellers. These people flock to cities for jobs, like they do anywhere in the world. Except, in India, they are incentivised to form slums (more on this later).

Cities which are better governed, and legislators who are more far-sighted and pragmatic, know that the problem lies with the rich and the powerful. It lies with the nature of businesses which want helping hands. They have sensibly prevented their respective cities from creating slums as terrible as in Mumbai. In fact, India should be looking for solutions to deal with migrant workers in each city the way Singapore has.

But the rich don’t want to pay more for support staff. The politicians see immense advantages in creating vote banks. Real estate developers see money to be made in the real estate games that slums offer. The police and the municipal staff see opportunities in graft. Ditto for the sector that works on providing identity papers, rent-a-mob opportunities and not to mention the musclemen required for gambling, entertainment, even prostitution. In Maharashtra, as possibly in other states in India, the best way to earn more graft money is by not legalising some such activities.

Even the courts know this. Just last month, the Bombay High Court came down heavily on the government for the way houses were crumbling in areas that looked like slums. Illegal settlements, shoddy construction, and greasy palms all worked together to cause deaths amid inhuman conditions. As the courts said, Maharashtra is the only state in India to allow free housing for slums. It even tried to exempt slum dwellers from paying property taxes in perpetuity for the free houses they got. Fortunately, saner counsels prevailed, and this proposal was shelved.

A bench of Chief Justice Dipankar Datta and Justice GS Kulkarni came down heavily on the Maharashtra government and the Brihanmumbai Municipal Corporation (BMC) for allowing illegal and unauthorised constructions to “blatantly” come up without following existing laws. The BMC claimed that it was helpless because of state government policies. The latter blamed the former.

The bench said the working population of the city needn't live in slum tenements. It said the state could draw inspiration from the "Singapore model" of housing for the poor.

The courts are right, but it won’t be very simple. Unless the Supreme Court and the Election Commission work together to address this problem, India could see more deaths soon. But that will be discussed in the subsequent articles.