Last week, Prime Minister Narendra Modi invited global funds and businesses -- which have about $6 trillion of assets under management -- to invest in India. He pitched the nation as a safe and stable destination. His webinar audience included the world’s largest pension and sovereign wealth funds.

“Demand with democracy and stability with sustainability are things that India offers, Modi said in a virtual address to global investors” stated Bloomberg in its report. India also provides growth with a green approach, it reported, quoting the prime minister.

“A strong and vibrant India can contribute to stabilization of the world economic order,” Modi said, pledging to “do whatever it takes to make India the engine of global growth resurgence. There is an exciting period of progress ahead. I invite you to be a part of it.”

The prime minister talked of how his government had in the recent past worked to make India more investor friendly. That includes offering incentives to some manufacturers, amending labour laws and lowering tax on companies to among the lowest in Asia. Consider, for instance, how the much vaunted Shinkansen (Japan’s bullet train) has not yet progressed despite a high decibel pitch in November 2015. Five years later, the funds remain unutilised, and the project date uncertain.

Or look at the even more ambitious Dedicated Freight Corridor (DFC) which could have changed logistics for much of India. The project was conceived of in 2005, the agreements signed in 2006 by the then Prime Minister Man Mohan Singh and the Japan Premier, Shinzo Abe. It was to have been completed by 2014. The project has gotten stalled.

Ditto for the even more ambitious DMIC (Delhi Mumbai Industrial Corridor) which envisaged the setting up of 24 smart industrial townships under the protection of Section 234-Q of the Indian Constitution. That shelter would have protected these cities from political interference, and the repugnant inspector raj. The new cities would have provided both manufacturing and non-manufacturing jobs, economic growth, and exports. The first phase was to have been completed by 2018. It has almost been forgotten, even though Japan has already committed the funds for this project.

Listen to the other discordant notes.

Did it take a n international tribunal to tell the government that retrospective laws – as in Vodafone’s case – are retrograde, and against investor interest?

Does it need a Solomon to tell the government that it makes more sense to go after a renegade self-styled godman Nityanand, who has formed his own so-called republic and central bank, than a Vijay Mallya who was at least a creator of jobs and wealth?

Has the government not yet understood that the sheer absence of countries lining up to sign its modified Bilateral Investment Treaty (except for Belarus, Cambodia, and Brazil) is a pointer to the gaping need that investor countries want bridged? That all investor countries want access to international arbitration and investment protection? Without these two guarantees, investments will not be forthcoming – at least not in a steady flow

True, during the latest year, FDI has soared. But that is because of a very unusual opportunity some investors saw in the offering made by Reliance-Jio. That cannot be considered a sustainable inflow. Remove those funds, India is still scraping the bottom.

And if one goes by RBI figures (see chart below), during 2019-20, India attracted a net FDI of just $43 billion. That is pathetically small. Says ADB in its report titled “Meeting Asia’s Infrastructure Needs”, India will require investments of $5.15 trillion in infrastructure till 2030 (China will need $15.27 trillion). 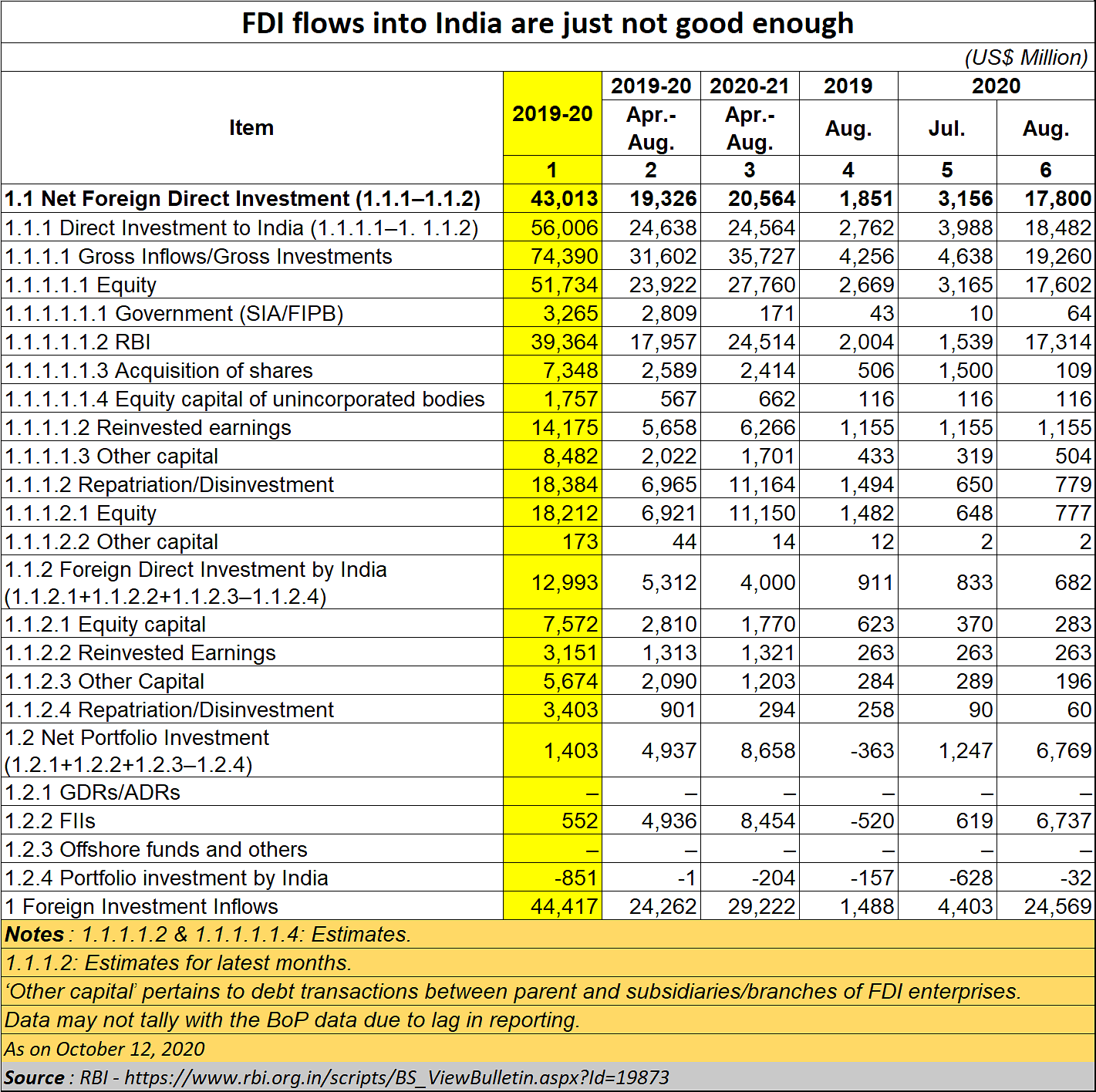 India also needs to create some 90 million non-farm jobs by 2030, though the actual figure could be double that since 50% of people are still engaged in farm related jobs. It is well known that the farm sector continues to face distress. Even in BJP run Uttar Pradesh, farmers remain exploited. Milk producers get almost half the price of their milk than in states where there are milk cooperatives. To create decent jobs, which can help India and the government, create more wealth, India needs to create excellent manufacturing facilities. For that to happen, the country needs investments. Urgently, Desperately.

But India is plagued by three major problems:

(a) regressive laws that hinder productivity -- e.g. Haryana just last week insisted on a 75% reservation for local workers and made this applicable to the private sector as well. Maharashtra wants reservation for its Maratha population. If companies cannot employ the most meritorious, they will not be able to generate the right rates of return.

(b) corruption and harassment by petty officials in day to day working of businesses -- e.g. the shops and establishment inspectors, and the attendant inspector raj.

(c) needlessly long dispute resolution -- these protected territories could have their own courts, and disputes should not normally be permitted to be reopened by Indian courts unless agreed to by an independent arbitration tribunal with its seat overseas.

As a result, increasing numbers of Indian entrepreneurs are setting up their manufacturing facilities outside India, and then export their produce to Indian markets.

Take for instance Thailand, which enjoys a Free Trade Agreement (FTA) with India. Hence, goldsmiths have opted to set up shop there and export jewellery to India. Ditto with pump manufacturers and water filter component producers among countless others. The cost of doing business is lower. Productivity is higher. Thailand’s exports to India are increasing (see chart below). These production facilities could have been created in India. That would have meant more jobs in India, and more taxes for the government. India has lost. Thailand has gained. 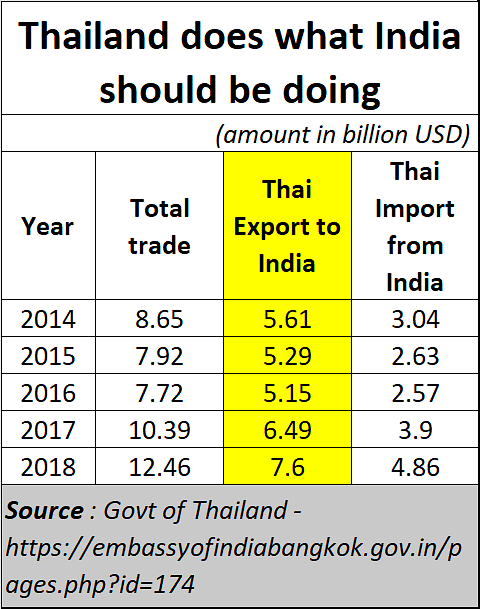 Thailand allows companies to be set up within a day, with all clearances in place. It allows investors to commence manufacturing in less than a month’s time.

India cannot do this because its vested interest lobbies will not permit it. So, the solution is to ringfence investments into industrial zones which can be protected by the Constitution under Sec 234-Q. That would allow industrial centres to be free from local politics, inspector raj and could enable them to have their own special courts for resolving industrial disputes as well.

The survival of Jamshedpur from Bihar’s turbulence and of Noida from that of UP is on account of such ringfencing and protections.

You can even give away such zones to an investor country to accelerate investment flows. So long as foreign investors do not mortgage the property or the licence itself – thus ensuring the sovereignty of this protected zone – India should be safe.

State industrial development corporations may not be the answer. Everyone thought Maharashtra had a good model when it launched SEEPZ (the Santacruz Electronic Export Processing Zone) in Mumbai. The plan was good on paper. But then politicians (and bureaucrats) bought land in and around SEEPZ, got the zone converted into commercial property, made a killing, and the investors lost the protection they were promised under the Industrial Zone Acts.

The same thing happened with the MIDC in Navi Mumbai.

That could also explain why Maharashtra’s pre-eminence among investment destinations in India has been slipping (see the first chart).

Politicians will tell you that this process would infringe on the sovereignty of India. Really? They need to be reminded that this is precisely what is being done with ports in India. Foreign players are given terminals on a 25 year least.

JNPT, the richest port in India, makes more money as a landlord – leasing terminals to foreign players – than as an operator of terminals itself. India does this with airports as well. Since cities and industrial townships require more investments, the concession period could be extended to 50 years.

Investment protection, an industrial zone which protects investors from the unpredictable political pressures that are endemic to India, and the ability to resolve disputes quickly will bring in investments. Not appeals by the Prime Minister. Appeals work when ground realities change. At the moment, that does not happen to be the case.

This author’s discussions with economists, investment bankers and trade commissioners of countries have all confirmed the need for introducing protected zones (under 234-Q). India’s bureaucrats don’t like it, because it would make them lose their ability to play power games with industrialists. So, they advise politicians not to allow such measures.

But politicians need to realise that if they want more jobs, more money, and more atma nirbharta (self-reliance), protected zones with speedy dispute resolution and investment protection will be the fastest way to generate wealth.

Will India’s legislators wake up to this crying need?

The naming game goes merrily on