Policy watch: How serious is India about ease of doing business?

Last week, the PHDCCI and the University of Delhi came out with a report on Ease of Doing Business for MSMEs in India: Percolating EODB Reforms at Factory Level. The report is a survey and lists out measures that could be taken to revitalise the MSME sector. Some of the data comes from the World Bank.

That makes one look back at the 2019 report by the World Bank and the government of India on the country’s achievements in respect of ease of doing business. There has been no report thereafter. 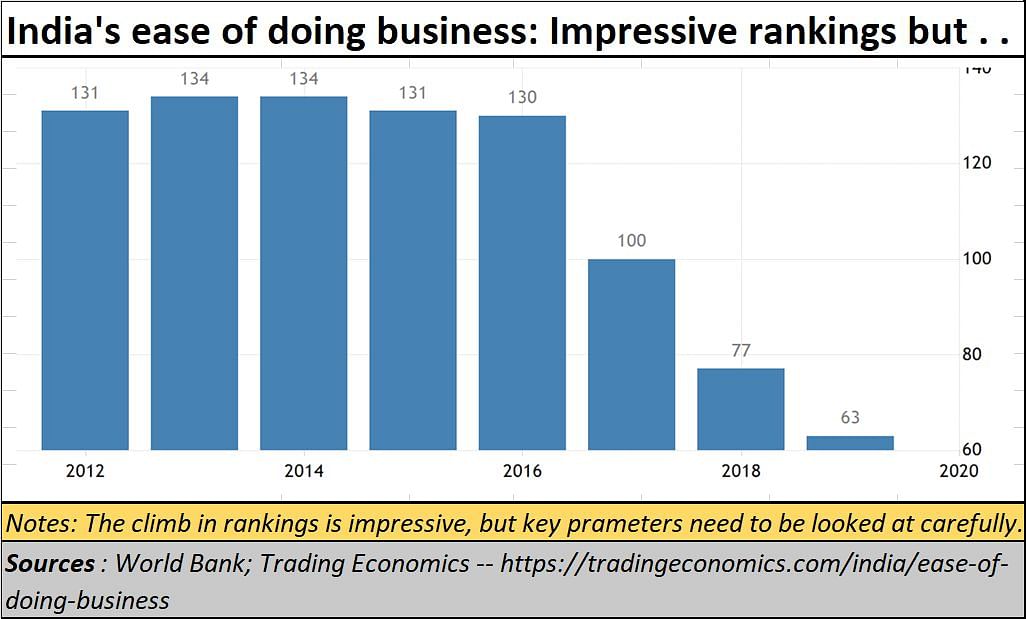 The headline news does make most Indians proud. But a closer look India’s standing on specific issues should make any corporate champion hang his head down in shame. Some of the parameters that had pushed up India’s scores were “protecting minority investors”, and “getting electricity”. At ground zero, however, even getting electricity can be a nightmarish experience, with graft being demanded at every stage of the process involved. And minority shareholders may have been please, majority shareholders weren’t. Protecting minority shareholders may look good, but if the majority must run from pillar to post in trying to comply with government regulations, the experience can be scary if not frustrating. 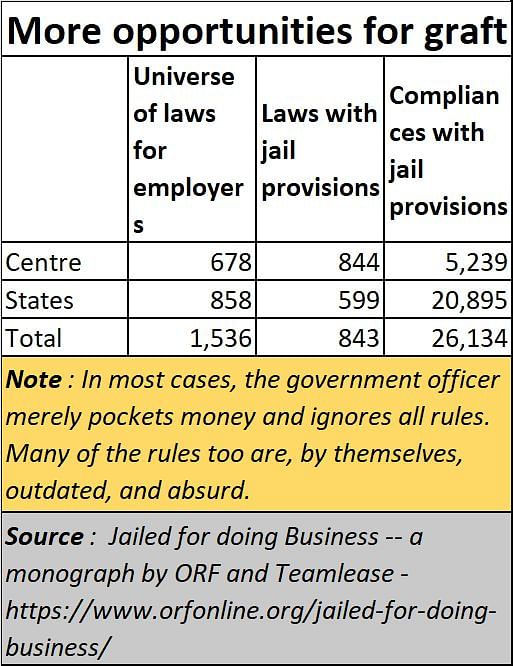 The common thread connecting registering property, paying taxes, and enforcing contracts is governance. Each of these requires interface with government officials. And each encounter brings along its own set of challenges.

Right from unwanted delays to outright demands for ‘money’ the list of compliances required can be daunting for any entrepreneur. Observer Research Foundation (ORF) compiled such information in association with TeamLease and noted that India is a place where you can be jailed for doing business.

Collectively, both state and central laws require some 26,134 compliance. Of them 843 of them have jail provisions for non-compliance. The fact that not many people go to jail suggests that there most infractions were ‘settled’ in one way or another. But these infractions can become chargesheets overnight, as interactions with the Shops & Establishments department indicate.

Hence, not with standing the claims that India has improved dramatically in terms of ease of doing business, day-to-day experience and anecdotal narratives suggest quite the opposite.

That is also the reason why some of the data compiled by the government must be taken with a pinch of salt. PHDCCI does not make any mention of this. As its report states. “India is among the fastest emerging economies in the world ecosystem. The Government of India has launched various pro-business policies over the last few years that are targeted to boost performance and growth of Indian industry. One such reform was GST, which aimed to make tax compliance easy and more cost effective through e-filling and by bringing the nation under a uniform indirect tax system. The implementation of the Insolvency and Bankruptcy code (IBC) was aimed to make insolvency proceedings more transparent and expeditious. The launch of Startup India and Make in India aims to build a strong eco-system for nurturing innovation and promote employment and growth. Such policies have brought about a positive change in the overall Ease of Doing Business (EODB) ranking and parameter-wise ranking of our country.”

Moreover, the government claims that is keen on bettering its score. The states and EODB

However, a look at the way states function reinforces the belief that the data supplied cannot always be relied upon. Observe how Uttar Pradesh is shown as the second most business-friendly state when it comes to ease of doing business. Really?

Consider the strong-arm tactics adopted by the police. A mere count of the number of times the Supreme Court had to step in to prevent the local administration from releasing a guilty person, or when innocent people were incarcerated is frightening. Look at the way the state continues to have the second lowest per capita GDP (the lowest is Bihar). This is despite the substantial doles the state gets from the Centre for projects like Namami Gange, Mathura, Ayodhya, and Varanasi (among others). Or even the refusal to provide details of its child care institutions as required by the Supreme Court in the wake of reports of large scale abuse of girl children in such centres.

Do look up the RBI’s Handbook of Statistics on Indian States 2020-21, and you are convinced that you need more confirmation about the seriousness of intent. Study just one parameter – Gross fixed capital formation (GFCF) which points to the willingness of governments (state and central) to invest in productive capacities.

Take a look at the top ten states who have invested in capital formation, and compare the growth in these numbers since 2014. You will find that the country itself witnessed an extremely low growth in GFCF of just 6.5%. This was lower than the growth in tax collections Net direct tax collection increased by 49.02 per cent during financial year 2021-22, while it has registered a growth of 34.16 per cent in FY 2021-22 over the collections of 2019-20. When tax collections grow significantly faster than GFCF, there is cause for worry. States like Madhya Pradesh, Gujarat and Maharashtra saw an increase which was lower than even all-India figure during the 2014-2019 period).

The government has possibly begun to realise the pitfalls of not increasing GFCF allocations. Last week, it stated that it would not trim its capex plan despite inflation running hot. One hopes that this intent is actually acted upon.

Without adequate investments in productive capacities, and without reining in the capricious ways of government officials, there c an be no real ease of doing business.

India needs growth urgently. It has the potential. But investments have shrunk because of the unfriendly investment atmosphere in the country. This has been worsened by the global climate as well.

India can break free from the global jinx. But it must set is house in order. It must make data accessible. For instance, this year, the Economic Survey did not have the Statistical section on the Indian Economy. Lok Sabha and Rajya Sabha answers to queries raised are not easily accessible. And the Census 2021 has been delayed.

The government must make legislators focus their energies on productive capacities and capabilities rather than coming up with a new cause for discord – hijab, loudspeakers, and now seeking to convert mosques into temples. Had the economy been doing well, such distractions would not have mattered. Today they could ignite a spark which could explode the economy. HomeAnalysisPolicy watch: How serious is India about ease of doing business?